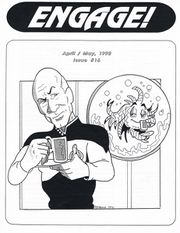 Engage! 18 was published in August/September 1992 and contains 18 pages.

Engage! 23 was published October/November/December 1993 and contains 22 pages. The cover art is by Elizabeth Trach. 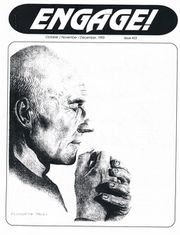 I'm blushing inwardly because this is the first time I've written to the "Letters" column since I joined the fan club over two years ago. But after reading issue 23 of "ENGAGE!" I knew I had to take out my typewriter and share my feelings with you and my fellow club members.

Craig, this particular issue is the most delightful you've produced so far. I enjoyed the photo of you with Patrick Stewart and got a kick out of reading about his convention appearances - as I always do. Meribeth Sapinski's account of Patrick being ambushed by "attack" beverages on his way to and on stage at the Valley Forge convention was funny. And I laughed out loud as I read about that young boy's attempt to play matchmaker for his mother and Patrick at the Indianapolis convention. The way Patrick handled it was priceless. It was truly moving to see how he took the time to talk with and sign autographs for the terminally ill children at the San Jose convention. It proves that Patrick's heart is as great as his many talents. It also shows that he has not let stardom go to his head and has not placed himself on so high a pedestal that he is out of touch with his public. I missed Patrick's stint as a presenter at the 1993 Emmy Awards telecast. Thanks to the fan club's voice mail, however, I was able to catch him on "The Tonight Show with Jay Leno" where he commented that the three most important chairs in America are the Captain's chair, Jay Leno's chair, and President Clinton's chair in the White House. 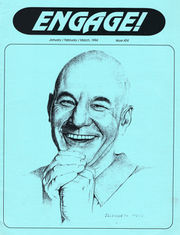