The Making of Star Trek

You may be looking for The Making of the Trek Conventions.

The Making of Star Trek was a professionally-published book, published by Ballentine. It was written by Stephen Edward Whitfield (using a pen name). Gene Roddenberry's name appears on it, but this turned out only to be a formality. See Background. 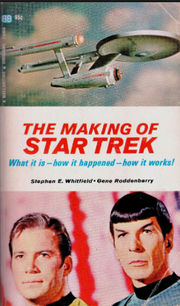 cover of the first (of many) editions 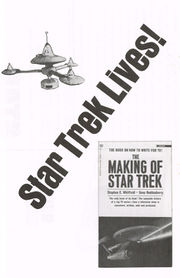 a 1973 ad in the Equicon program book, an example of fan-on-the-ground marketing

The book was published while the show was still on the air, and it was very first official reference book of its kind on the subject of Star Trek.

It included inside input from many of its creators, including studio executives, costumers, production contributors, and more. It includes photos, memos, and technical information.

Wildly popular, "The Making of Star Trek" was first published in September 1968, had a second reprint in November 1968 and a third in January 1969. Many other printings followed.

From the first edition's book jacket:

What it is - how it happened - how it works! The Biography of the Leading Science Fiction TV Program. STAR TREK! The long, hard battle of television's first tentative step toward adult science fiction, with the complete story on how the U.S.S. Enterprise was designed, her weaponry, equipment and power sources, the original concept behind the show, how the continuity is maintained, backgrounds of the characters, biographies of the stars, and pictures, diagrams, illustrations - the whole authentic history

For his research, author Stephen Edward Poe was given full access to the stages and offices of Desilu Productions, as part of the deal he brokered between model kit manufacturer Aluminum Model Toys (AMT) and the studio. Poe, who wrote the book using his stepfather's name of Whitfield (although virtually all his other writing was done under his own name), shared a co-author credit with Star Trek creator Gene Roddenberry. However, Poe wrote the book alone, but made a deal with Roddenberry, in which they agreed that Roddenberry would proofread the book and make his corrections and notifications before it went to print. For this, he would receive co-author credit and half the royalties. It also was thought that the appearance of Roddenberry's name on the book might make it sell better. Ultimately, Roddenberry was not able to review the book due to harsh production deadlines, but received the co-author credit, as well as half of the royalties, anyway.[1]

If you are a Star Trek fan, you will love this book. But you will also love it if you are in a creative industry. There is a great sequence in the book where a director is telling Sulu to push a certain button to fire the phasers on the Enterprise. Sulu says, "That button doesn't fire the phasers." On a sound stage with what is basically a prop NONE OF THE BUTTONS FIRE THE PHASERS. It's just a button. But not in this case. Roddenberry infused this show with so much reality and backstory that the actors were living it -- just like we were watching at home. The creative process involved in putting this show together was extensive. And the problem solving is genius. A whole new world was created with clear rules and structure on a shoestring budget. No one in Hollywood had seen or worked on anything like this. The show, like the Enterprise, was boldly going where none had gone before. And this book takes you on that ride. Godspeed.[2]

Holy cow, this book is just filled with inane details that only the most serious fan would care to know! Some stuff was very cool, like reading about the original design process for the first Starship Enterprise, how some of the props came to be, and some anecdotal stuff about the original cast. This is what I would call a perfect "bathroom" book.[3]

It's horribly dated at this point, but it was the first book of its type about Star Trek (along with The World of Star Trek by David Gerrold, and yes, I must be some kind of geek to know that). It's not really worth reading anymore unless you have some strange desire to read a 40-year-old account of the series. Its value, per se, is limited to two things: 1) If you had a copy in good condition, you could get a lot of bucks for it at a Star Trek Convention. 2) It contains Gene Roddenberry's words to the theme music of the original series. They're more than extremely awful. Don't remember the whole thing, but it starts out with "Beyond the rim of the star light, my true love lies off in star flight". It was all downhill from there....[4]