On the Edge (multifandom zine)

On the Edge is a slash, femmeslash, and het multifandom anthology.

From a submission request for the first issue:

Planned, hopefully, for Fall '92 or Winter '93. This is designed to be a mixed-media adult erotic zine. I don't plan to segregate between "straight" and "slash" for this one, nor do I follow a "quota" system. I will consider male and female slash pairs or else female/male. How much of whatever type appears depends strictly on what I get and accept. Any media universe, or literary universe in the public domain or adapted to media is acceptable. Any combination, usual or not. Will consider trios. Simple send me a story with gut-wrenching plot and/or hot action which will knock my socks off. Just a couple of my foibles: no "Mary Sue", gratuitous violence, or rape-fantasy, (mild, consensual S/M will be considered). SASE for guidelines. [1]

The editor commented on the submissions the first issue of the zine had received:

One of my guidelines for my mixed media zine, ON THE EDGE is for the writer to attempt to make a story meaningful for someone who hasn't seen the show. I have yet to see an EQUALIZER or KNIGHT RIDER episode, yet I received two stories based on these shows which absolutely knocked my socks off, and those of other readers, judging from the LOCS I've received. One of my main reasons for doing my own mixed—media zine was because I was tiring of reading stories in other mixed-media zines which assumed that I had seen the show in question; thus the story would go completely over my head. So in my own zine, I try and correct this tendency when I receive it in a submission to my zine. [2] 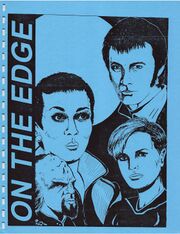 On the Edge 1 was published in 1993 and contains 211 pages. It was edited by Nina Boal. Art by Cat, TACS, Burnett, Baravan, Janet R. Cruickshank and others.

[Heart Sister]: Re "woman with a penis" -- The name of this story is HEART SISTER and it appears in QN THE EDGE. ***SPOILER ALERT*** The viewpoint character, Tasha Yar, perceives this person as being a woman. Even with the appearance of a penis — a bit different than Fergus's perception upon seeing Dil's penis in THE CRYING GAME. Like the film, this story explores the definitions of what is a "woman?" At any rate, this person explains to Tasha that she is a product of "prenatal biological engineering." The story strongly implies (at least to me) that the person possesses XX chromosomes and that all of her secondary physical gender traits are those of a woman, save for the presence of a penis. ***END SPOILER ALERT*** Have you read the story? Just out of curiosity, is it your view that a penis renders a person into a "man?" Please clarify. [3]

[zine]: On the Edge 1 is an old multimedia adult zine that I found in a used box at MWC. It has some B7 content, including an A/V story that is quite good, a BUART that I liked very much, an A/Servalan story and a Jenna/Cally poem. Other fandoms in this zine include Beauty and the Beast, ST:TNG, original Trek, Knight Rider, Quantum Leap, Thelma and Louise, the Equalizer, and The Professionals. It's a nice fat zine with quite a bit for everyone. Those who like het and f/f might find this zine a good buy; there's plenty of those kinds of stories in the other fandoms in this zine.

"Alien Eyes," by Khylara is rather sweet, and it's nice to see some rare J/C stuff.

"Jealousy Games," by Adrian Morgan and Brendan O'Cullane deals with what Vila was doing on Space City besides getting drunk. He and his lover Avon have quarrelled, so Vila looks for what he needs elsewhere, with some unexpected consequences. A/V isn't quite my cup of tea, but I liked this story.

"Nocturne," also by Adrian Morgan and Brendan O'Cullane, is a short, hot PWP featuring Avon and Servalan and set during "Aftermath."

In "Tarrant," by Janet Cruickshank, my favorite pilot finds himself imprisoned and at the mercy of the institution's meanest convict, until one day he's called to the warden's office where rescue awaits. Needless to say, this was my favorite story in the zine. [4] 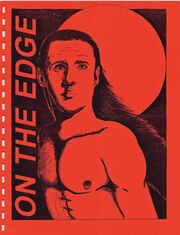 [Platonian Aftermath]: This story is only five pages long, but quite satisfying in its own right. Set after the events on Platonius, Kirk decides to seek out Uhura. Not because he desires her, but because he can use her to redirect his desire for Spock. But on the way to her quarters, he runs into Spock, who apparently was seeking out Chapel for the same reason, only to find Chapel and Uhura together.

When he tells Kirk this, the two men decide to go to Kirk's cabin for a game of chess. Of course, other things ensue.

As with [Descensus Averno], I could not find this on the net. [6]

On the Edge 3 was proposed but not published. 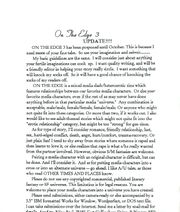 flyer for the proposed third issue
From a submission flyer:

ON THE EDGE 3 has been postponed until October. This is because I  need more of your fine tales. So use your imagination and submit My basic guidelines are the same. I will consider just about anything your fertile imaginations can cook up. I want quality writing, and will be a friendly editor in helping your story really sizzle. I want something that will knock my socks off. So it will have a good chance of knocking the socks of my readers off. ON THE EDGE is a mixed media slash/heteroerotic zine which features relationships between our favorite media characters. Or else your favorite media characters, even if the rest of us may never have done anything before in that particular media "universe.' Any combination is acceptable, male/male, female/female, female/male. Or anyone who might not quite fit into these categories. Or more than two, if it works out. I also would like to see adult-themed stories which might not quite fit into the "erotic relationship" category, but might be too "strong" for gen zines. As for type of story, I'll consider romance, friendly relationship, lust, sex, hard-edged conflict, death, angst, hurt/comfort, trauma-recovery. Or just plain fun! I tend to shy away from stories where someone is raped and then learns to love it, or else realizes that rape is what s/he really wanted from the partner involved. However, obvious S/M fantasies are welcome. Pairing a media character with an original character is difficult, but can be done. And I'll consider it. And as for putting media characters into a cross or into an alternate universe — go ahead. I like A/U tales, as those who read OTHER TIMES AND PLACES know. Please do not use any copyrighted commercial, published literary fantasy or SF universes. This limitation is for legal reasons. You are welcome to place your media characters into a universe you have created.

Please send submissions, either camera-ready or else accompanied by a 3.5" IBM formatted Works for Window, Wordperfect, or DOS text file. I can take submissions over the Internet. Send me a letter by snail-mail for details.