Beat Up and Rape Avon

From Fanlore
(Redirected from BUARA)
Jump to navigation Jump to search 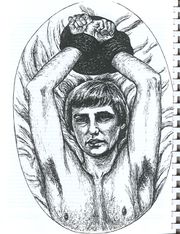 art by Whitby27, one of the tamer images of Avon in dire straits, from Liberator Fantasies. According to the author, this story contains only consensual d/s.

Beat Up and Rape Avon is usually referred to by its acronym, BUARA. It is an old term used in Blake's 7 fandom in the same way "Get'em" was used in Star Trek. It is "used for slash stories where Avon suffers terribly, but almost invariably without any permanent damage." [1][2] The term was not used exclusively in stories where Avon was raped or suffered from sexual assault - it also encompassed all forms of Whump and Get'em scenarios. As far as some fans were concerned, Avon suffered beautifully across the board.

Much less common is the term BUARB, "Beat Up and Rape Blake."