Liberator Fantasies is a slash 257-page anthology. It won a 1999 FanQ. The 30 pages of art is by Whitby27 with one illustration by Randym. It also features filks by Vanessa Mullen and Oliver Klosov, and poetry by Ebony. 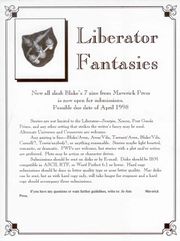 flyer seeking submissions for the zine

LIBERATOR FANTASIES (An all B7 slash zine)

"Liberator Fantasies" has a full range of stories from the humorous to the dramatic, featuring the best B7 writers working today. The pairings include Blake/Avon, Avon/Tarrant, Vila/Tarrant and other combinations.

Here are a few hints of what is in this large and varied zine.

"All Work and No Play" by Mireille: "I'm bored. Are you sure there's no wine?" Tarrant didn't even bother to look up from Scorpio's controls. "You've been looking for three hours. If there is, it must be the galactic hide and seek champion."

"Battle Fatigue" by Irish: When Tarrant turned to fetch a tool Avon wanted, he heard a sharp popping sound as the cover plate blew off the panel. The explosion shoved Avon into him and they both went down in a disheveled heap.

"Expendable" by Vanessa Mullen: With a fluid, long-armed grab, Avon snatched up the box of credits. "Quick, Vila. Set me down again." Vila's jaw dropped. "What?" But he was already responding to Avon's urgency by squeezing round to his position behind the teleport console.

"Rumours of Courage" by Julia Henry: Well, I do, my lovely Dayna, a pity fuck really isn't what Avon needs right now. Even if he could raise an ... interest after what he's been through over the past few days.

"Witch Hunt" by Ebony: There is still a chance that I may cheat death. The timber may not burn, for only a few have thrown those rare dry sticks.

"Love's Illusions" by Willa Shakespeare: "Why? I already know your answer." Jenna shook her head. "I can't force you to want me. Any more than Vila could make me want him. But regardless of personal feelings, you have to take physical needs into account," she went on more calmly. "As the only experienced spacer on Liberator, I am advising her captain that the crew desperately requires a relief stop." "Relief stop?" Blake asked, puzzled. "No Federation rest and recreation centre would take us in." "More likely, they wouldn't let us out," Avon added. "Are you sure this enforced chastity hasn't given you brain-warp?" he asked Jenna.

"Salvage" by Misha: "What is it, Zen?" *A single Federation pursuit ship entered maximum sensor range one-point-one-seven minutes ago.* Avon slapped Orac's key into its slot and snarled as the machine hummed into life. "Orac, why didn't you inform me of that pursuit ship?" *You requested that I alert you to Space Command flight profiles. That ship did not file a mission profile and has not checked in with Flight Control Authorization Centers at any point.*

"Domo" by Gemini: "I'd like to inspect the slaves before the auction." The sun was hot, the gravity was a touch too high, and Blake wanted to get indoors out of the heat. "Of course." Terrin gestured casually towards the low buildings where the merchandise was housed. His breath smelt faintly of some sort of narcotic. Did the pirates deal in drugs as well as slaves?

"Path of Thorns" by Mitzi Tick and Felicia Adam: Tarrant had almost died on Gauda Prime. Then he truly had died during interrogation. Each time he'd succumbed to the gentle embrace of death, the Federation medical personnel--using their most advanced technology--had revived him.

Liberator Fantasies also will feature filks by Vanessa Mullen and Oliver Klosov, poetry by Ebony, and about 30 pages of art by [Whitby27] and Randym.

See reactions and reviews for Path of Thorns.

See reactions and reviews for At the Closing of the Day.

See reactions and reviews for Domo.

See reactions and reviews for Salvage.

[zine]: Please note - this is an advance notice of a zine with explicit homosexual content. One or two of the stories are pretty extreme even by slash standards (ie. rape, death, etc.). If you haven't read slash before and don't read pornography, then I wouldn't recommend this as a first foray into slash. If on the other hand, you like graphic male sex with the occasional bit of violence, then you're going to enjoy this. (This is from the same publishing house at Dark Fantasies) Not all of the stories are extreme by any means, but there's at least one that's pretty heavy. [2]

[zine]: This is a terrific zine! I'd rate it with some of the juicier issues of Southern Comfort, which is saying a very great deal indeed. It's very nicely produced, and the contents live up to their presentation. The illos are excellent, and some of them are explicit; you'll want to be careful about reading this one in public. Definitely for private enjoyment!

"Expendable" by Vanessa Mullen is a classic, red-hot BUARA story (for anyone who wonders, that's Beat Up And Rape Avon, a favorite form of slash hc for many of us :). Avon is kidnapped and sexually tortured, with Blake watching via a sensornet such as we saw in "Deathwatch." Avon is eventually rescued, but the ending is not a happy one; there's a very B7ish twist.

"All Work and No Play" by Mireille is a pleasing contrast-- a sweet, straightforward PWP that presents Tarrant and Vila as established lovers enjoying a little interlude while they are alone together on Scorpio. Both of them are charmingly in character.

"Never Say Die" by Pat Fenech has no explicit sex, but it is wonderfully intense emotionally, showing the events of the last part of "Star One" from Blake's POV-- including his real feelings about Avon. Beautifully written, and the illos for this one are especially successful in capturing the tone of the story.

"Battle Fatigue" by Irish brings Avon and Tarrant together under somewhat unusual circumstances-- Avon has been temporarily blinded in an accident. Bizarre psychological consequences ensue, and the ending, as so often in the B7 universe, is basically a sad one.

"Rumours of Courage" by Julia Henry is the only A/V story, but it's a lovely one. There's no actual sex within the time frame of the story; but Avon and Vila are established lovers, and the emotional intimacy as Vila comforts Avon after "Rumours" is more intense than in many stories with more sex.

I like one of the A/V illos for this as much as, or maybe even more than, the yummy bondage pix for "Expendable." It's just so sweet! I've never thought of myself as being much of an A/V fan, but Julia and Val between them might yet change my mind...

"Witch-Hunt" by Ebony is very strange indeed. I like it, and I have reread it a number of times (it's only one page long), but I confess that I still don't exactly understand it. It seems to be a PGP, perhaps. The narrator, about to be burnt as a witch, senses the presence of ghostly beings who resemble B7 characters-- one in particular. Very well written, and very interesting in its ambiguity.

[See this reviewer's comments on Salvage.]

"The Late Great Blake" by Jonquil East is a howlingly funny PGP. At the funeral of the late, great President Blake, we listen in on the thoughts of the various mourners and gradually realize what an... interesting... life the dear departed was leading. Even funnier than the revelations as to he was sleeping with are the revelations as to who he wasn't sleeping with. No one still alive knows the whole truth, but by the end of the story, we do!

[See this reviewer's comments on Domo.]

"Walking in the Dark" by Patti is sad too, not for what happens, but for what doesn't. This story presents an Avon who suffers from clinical depression-- and unrequited lust. Interestingly, Blake's lack of response is never fully explained, and I find myself hoping that there might eventually be a sequel with some happier developments. Maybe Blake really does like men in general, and Avon in particular, and has only temporarily forgotten because of his brainwashing? [Says the hopeful reader.]

"Tonight" by Altair describes an encounter between a mutually wary Avon and Tarrant, soon after "Ultraworld." It's very believably presented, and the ending is even slightly hopeful. (But only slightly-- this is B7, after all!) Nice Tarrant POV, as he wonders what the hell Avon's up to now.

"Cough" by Henneke is also A/Ta, with a comic set-up leading to some nice hot sex.

[See this reviewer's comments on At the Closing of the Day.]

(In fact, even if A/B is the only B7 slash pairing you go for, you'll want this zine. It's got two A/B stories that I think are standouts-- this one and Pat Fenech's-- plus three more good ones by Patti, Dawn, and Willa Shakespeare.)

"Leadership" by Twisted Sister is another A/Ta PWP. This one hinges on the... interesting... means by which Space Command enforces its hierarchy, and the things Avon must do if he's going to function as Tarrant's leader! This was the only story in the zine that I felt dissatisfied with, but for a positive sort of reason: I wanted it to be longer, and to develop the ideas (and the sex) a bit more.

"Terms of Reasons Why" by Vic Coopers is a sad counterpart to stories like "Leadership" and "Cough." This one is about Avon and Tarrant not getting it on-- unfortunately for all concerned. "Dreamless" by Dawn Friedman is a very strange, short A/B-- it ends in suspense, so I'm not sure whether it's consummated or not! Very, very angsty indeed, from the POV of a Blake obsessed with the conflict between his perceived mission in life and his love for Avon.

[See this reviewer's comments on Path of Thorns.]

"Love's Illusions" by Willa Shakespeare rounds out the zine. It's an interesting A/B with many twists, some comic, some not. Avon and Blake visit a virtual-reality pleasure palace together. Guess what each dreams of? But it's more complicated than that...

My favorite piece of poetry in the zine is Vanessa Mullen's "Avon Without Guilt" filk. Yes, yes! To think that it's been almost a year since I first heard this gem at last year's MediaWest. I also like Oliver Klosov's "Another Rousing Chorus," which I also remember hearing at a con-- Eclecticon, maybe? And on the more serious side, there's a set of three poems by Ebony, "Nightmare," "Waking," and "Sleep," that form a sort of PGP narrative. Dark and beautiful, just like you-know-who... :)

This is a zine with something for just about every slash fan, in terms of the variety of pairings and tone of stories. If you're new to the whole concept, it might be a nice way to start, as it's a good sample of what's out there. [3]