From Fanlore
(Redirected from Mirrorverse)
Jump to navigation Jump to search

A mirror universe is a type of alternate universe in which familiar characters are given reversed characteristics. Heroes might be evil, or at least far more ruthless and aggressive. This is often indicated visually by more sexually revealing clothes, longer hair and/or facial hair, or quasi-fascist imagery.

The term originates from Star Trek, which has several episodes portraying a canonical alternate universe in which the peaceful Federation never existed, replaced by the brutal, conquering Terran Empire. In terms of air dates, the first "Mirror Universe" episode was the TOS episode Mirror, Mirror. [1] [2]

In general when a fanwork is stated to be set in a 'mirror universe,' especially Star Trek's mirror universe, it means the story will be darkfic. The canonical "moral inversion" of the Mirror Universe setting gives the fanwork creator the opportunity to depict dark subjects such as torture, death, rape, dubiously consensual sex, or fantastical/unsafe BDSM practices. (In "Mirror Mirror" it was canonically established that Enterprise crew members can use sex as a means of advancement through the ranks.) Characters from the regular universe and the Mirror Universe may also interact, giving the writer an opportunity to explore doppelganger or Evil Twin scenarios.

A fanfic that tells the story of a general type of reversal, such as a Stargate SG-1 fic where Jack O'Neill is a scientist and Daniel Jackson is a military officer, is not a mirror universe story, as it is lacking the dark doppleganger aspect. 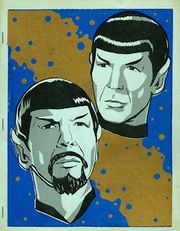 Art from Interphase by Monica Miller. Spock and his Mirrorverse double, sporting the famous Evil Goatee. Ironically, Mirror!Spock was not actually evil.

On March 25, 2010 a post was made to the LJ community ontd_startrek announcing "ontd_startrek IS NOW THE PROPERTY OF THE TERRAN EMPIRE. (ALL HAIL THE GLORIOUS EMPIRE! BOW DOWN BEFORE THE MIGHT OF THE EMPIRE!)" [3] At first, not realizing that the new "overlords" named in the post were actually the ontd_startrek mods with slightly different names, some community members suspected an actual invasion by trolls and reported the "takeover" to LJ Abuse.

The confusion was quickly cleared up, and "Mirrorverse Week" was soon underway, celebrating everything Mirrorverse. [4] In celebration, all posts that week were Mirrorverse-themed, and community members added goatees/facial hair to their icons, two hundred and thirty-eight of which were collected in one giant macro. On April 1 the community returned to normal, although there were ominous hints that at some point in the future, the "evil mods" might return.