The Crack in the Mirror 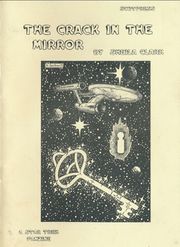 The Crack in the Mirror is a gen mirror universe novel by Sheila Clark. It was published in 1994 and has 107 pages. The cover is by Christa Richart.

Summary from the ScoTpress site: "A Mirror Universe story that follows the career of Captain James Kirk of the ISS Enterprise, building on the few details we learned about him during the episode Mirror, Mirror. First printed 1994. (word count: 54347)"

An interesting exploration of the ISS Enterprise crew and their history. Our guys are all a little too good-hearted here. These are not the evil counterparts of our team, but our basic good guys twisted by the nastiness of their universe, which is led by a drugged, evil emperor, a descendant of Khan Noonian I. We start in ("Thomas") Kirk's privileged childhood, where he is befriended by a mysterious Vulcan (later revealed to be Sarek, who will lead the revolution) and forms a loyal bond with his foster-brother/servant Jon, who will become his trusted "operative." Kirk takes command of the Enterprise by disposing of a very vile Pike, and forms an alliance with Spock when he learns that the Vulcan is truly uninterested in command himself. He cultivates favor with the rest of the crew by improving working conditions and booty. McCoy comes aboard when a plagued planet - with Piper on it - has to be destroyed. Episodes addressed include The Apple, Mirror Mirror, and Journey to Babel, during which Sarek recruits Kirk to the revolution. McCoy will not join them because of the danger to Jo. However, it turns out that McCoy's father-in-law, the Surgeon General, is one of the ringleaders, so he does later. (Interestingly, in the Mirror universe, McCoy had a happy marriage, and went to space when his beloved wife was murdered.) The revolutionaries take over in bloody battle (with swordplay) and install young Empress Robin as head of a kinder, gentler Empire. Much is a little too nice for the Mirror universe, but it is generally plausible and has some very good insight to life in the Mirror. <[1]

I remember the first time I came across a story by Sheila Clark. It was in the first zine I ever read, at my first con in 1989. After years of being vaguely dissatisfied with the published novels I discovered this new source of story, and realised that there were people out there who could write stories in which our Enterprise friends behaved in character as I perceived them. That zine was Log Entries 8, and to my distress, the first thing Sheila did in the story was kill off Kirk... The title of the story is Cause of Death - Unknown - I looked it up. As a matter of interest, Valerie Piacentini also has a story in that zine; and she also kills off Kirk in it... The title of that one is Legacy.

I digress. The Crack in the Mirror does not kill off Kirk; it is set in the Mirror, Mirror universe and Sheila moves events back to the time when Commander James T Kirk becomes First Officer of the ISS Enterprise. We are presented with the career the alternative Kirk might have had; his assassination of Christopher Pike, sadist and bully; his acquisition of Marlena as Captain's Woman; his installation of the Tantalus field to protect his position. This Kirk is ruthless, but not wantonly cruel, possessing his own brand of honour, and some compassion which he dare not show lest it be interpreted as weakness. I watched Mirror, Mirror after reading the zine and I think that Sheila has done a really good job of fleshing out the Mirror universe characters while keeping them true to what we see of them in the episode. The Spock/Kirk relationship is particularly well done.

The world of the Empire is ruled by the despotic and insane Noonian dynasty. Rebellion is brewing, orchestrated by Vulcan. After the Halkan incident. Kirk becomes sympathetic to the cause of reform. At the end of the story the scene is set for the development of a new regime - in government, and on the Enterprise— in fact it demands the next installment of the adventures of the ISS Enterprise.

The zine is 107 pages long in A5 format so it is a much fuller story than I have suggested in my summary. For instance the story covers the alternate Kirk's early life, and adventures from the 'alternate' 5-year mission which I haven't mentioned. [2]