The Kiss in the Alley Debate

In the early 1980s, there was a hot debate among Starsky and Hutch fans, one fueled by the technology of that new machine called the VCR. Fans argued at great length about whether the two cops kissed in the alley scene during the episode "The Fix" when Hutch comes down off the wall and falls into Starsky's arms.

The episode "The Fix" is full of angsty moments that lend themselves to smarm, hurt/comfort, and various slashy interpretations. One fan commented that it was "another bit that makes the internal organs wobble about." [1]

This debate, of course, wasn't about the kiss itself, but about the tensions between fans who felt it demonstrated the reality of a homosexual relationship between the characters and those who did not believe in the premise.

Some screenshots from the episode are here.

In 2002, there was another fandom controversy regarding kissing/not kissing footage, this time in the Beauty and the Beast fandom. See The Kiss That Does Not Exist.

The vid by Kendra and Diana, "Kiss You All Over" (song artist: Exile), includes the 7 frames from the episode "The Fix" that this debate is based on.

The Influence of the VCR

One early vid was built around seven frames from [the episode] "The Fix" from the hug in the alley in The Fix. These frames, when shown slowly and advanced one at at time, made it look like the guys were kissing. The frames were called the "Magnificent 7" and debate raged around it in letterzines and among fens at the time. [2]

There was a letterzine. It came out every month, and had the kind of discussions which later moved to mailing lists and are now had on LJ. It even had flamewars. There was the infamous one about the Kiss in the Alley: did they or didn't they, with drawn diagrams (nobody had VCRs). [3]

I got out the box containing all the old l/z's — disinterred it, to be more precise/ from the mountain of boxes at present lurking in our spare bedroom—just to refresh my memory. And several hours later, I surfaced amazed. What a vast amount of subjects were covered—so many views aired (sometimes forcibly, sometimes acidly, sometimes even vitriolic), so many opinions, ideas, discussions, often on the mast trivial of subjects. Looking back, was The Kiss in the Alley (or lack of one) such a big deal? I suppose it was, at the time. And S/H, far from being the Love That Dare Not Speak Its Name, nowadays rarely shuts up. [4]

Some of the Debate 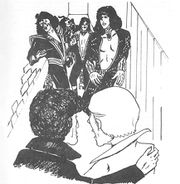 a helpful diagram from S and H #19, made by a fan to prove her point; another fan ferociously takes her to task for it, and other matters