Ship to Shore is a gen Star Trek: TOS anthology.

Ship to Shore v.1 n.2 is all Star Trek material. It was published in August 1979 (reprinted in 1980) and contains 58 pages. This issue was edited by Trudy Burke, Jean Timberman (production editors), and Virgil Burke (poetry editor).

The editor says this issue is several months late due to several reasons: having her young kids come to stay with her for a visit, a recalcitrant {bright red!) typewriter that had been in the shop for cleaning and a tune-up and came back with a wonky ribbon problem, and trouble getting contributions. 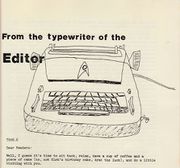 Ship to Shore v.2 n.1 was published in June 1980 and contains 80 pages of Star Trek, Star Wars and Battlestar Galactica fiction and art.

It is offset and stapled. 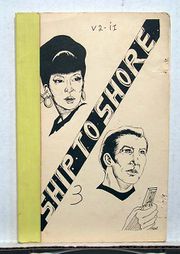 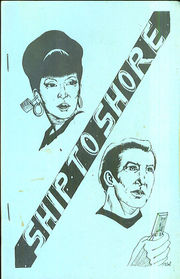 Ship to Shore v.3 n.1 was published in August 1981 and contains about 60 pages of Star Trek and Battlestar Galactica.