Steampunk was originally a term for a sub-genre of speculative fiction that imitated 19th Century "scientific romances" like the work of Jules Verne and H.G. Wells. Later, the term was applied to a general aesthetic involving styles that would be "futuristic" from the perspective of the 19th Century.

Steampunk is so popular that it has its own fan conventions. It is a popular style for cosplay, costuming and crafting; anything can and will be steampunk-ified. There are individual media fandoms for which the canon is steampunk, e.g. The Secret Adventures of Jules Verne. Outside of steampunk fandom, it is used in fanworks like fanfic and fanart, often in AUs for non-steampunk canons.

History of the term

The term steampunk was coined in the 1980s, though many important early steampunk works were written in the 1960s and 70s, and these works showed the influence of 19th Century authors like Jules Verne and H.G. Wells. The literary/media genre later expanded to include works set in worlds with advanced steam-powered technology, not just those recognizeably set in the 19th Century.[1]

The core of the steampunk aesthetic is futuristic/sci-fi styles from a 19th Century, usually Victorian or Edwardian, perspective: clocks, gears, springs, steam power, analog computers, typewriters, airships, etc. This has also been described as "retrofuturism". 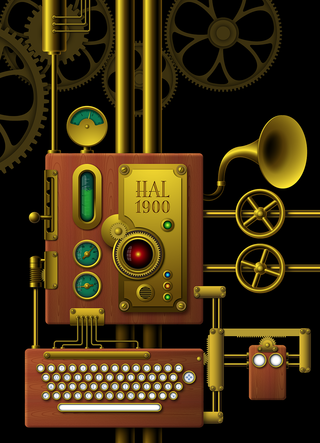 The influence of the fashion, architecture, technology, and interior design of Victorian London have a huge impact on the steampunk aesthetic. However, some people have expanded the style to include the same kind of retro-futurism from a non-Western perspective.

Japanese media are particularly known for steampunk themes and styles, particularly in the Final Fantasy games and in many anime and manga series. How universally these are considered steampunk and how available they are in English varies widely. Some Japanese steampunk seems to draw from the same Victorian roots as Western steampunk. Other Japanese steampunk draws heavily from Meiji, Taisho, or early Showa Japan.

Steampunk is a common genre and/or aesthetic in certain types of role playing games and in anime and manga. It is often hard to find in live action media (especially ongoing tv series) due to the high costs of the costumes, props, and set design, but many examples do exist. Many of the most common steampunk canons don't have fanfiction-producing fandoms associated with them, and a fair amount of non-English steampunk has yet to be translated into English. The examples below are all steampunk or have elements of steampunk, but opinions on whether they count as "fandoms" may differ.

There is some criticism of steampunk (of fan- as well as pro-works) in fandom because it is often seen to overly romanticise the Victorian era, even valorizing it and certain of its narratives (like of the scientist explorer), without also examining the colonialism, imperialism and racism that underpinned it:

Steampunk is paradoxical in that it claims to be all post-modern yet is all about the uncomplicated triumph of objective, uber-cool science. In fact this is a very modern notion, for which "modern" read "bright and shiny and wonderful right around 1880 or so." No wonder geeks are nostalgic. For a while there scientists really did believe that they were going to rule the world. Indeed, "scientific" theories of race did a great deal to prop up the imperialist project.
Steampunk redux by naraht[2]

In celebrating the figure of the adventurer and explorer, steampunk buys into certain assumptions. One: that there are places to explore and discover - the idea that a land can only be discovered by your culture, and has been previously unexplored even if people have been living there for centuries. Two: that, as naraht points out, "deep down, or perhaps not so deep down, there's a sense in steampunk that having an empire must after all have been rather fun". [...] And perhaps this is the crux of My Thoughts on Steampunk: it's a superficial understanding of the Victorian age without wanting to understand the anxieties of the age.
steampunk: my issues, let me show you them by forthwritten[3]

However, steampunk as a genre can also have non-Victorian settings (such as futuristic settings, or other worlds), and can also serve as a critique of the Victorian era or to develop stories and narratives from non-imperial, non-colonialist nations during the same time period.

Especially since the radical collective Catastrophone Orchestra founded Steampunk Magazine in 2007, steampunk had increasingly accentuated its multicultural, postcolonial, and anticonsumerist dimensions. So although there are certainly some apolitical “fellow travelers,” steampunks are not Victorian equivalents to Civil War reenactors. Instead, it is more accurate—and even definitional—to regard steampunks as reimagining the past and its speculations about possible futures in order to envision a different present and better future from today’s perspective.

[...] Steampunk’s obviously Victorian visual cues superficially evoke the era’s imperialism, racism, and sexism, as well as an arguably naïve fascination with technology. Some historians, then, might also infer in steampunk an innately positivist conception of history. But this would elide the degree to which its most committed practitioners consider it a form of technological disruption and political protest. Questioning “Progress,” especially as subsumed under the supposedly neutral umbrella of science and technology, is precisely what the editors of Steampunk Magazine had in mind when they declared in their inaugural issue that they were “colonizing the past so we can dream the future.” Even Verne and Wells, despite their racist and imperialist trappings, crafted cautionary tales about the hubris of technological mastery. Moreover, criticisms of steampunks’ ostensible positivism also brush over their highly intentional juxtapositions of sartorial “chronotopes”—symbolic representations of time and space used to craft alternate identities in the context of their communities and in disputatious engagement with the world around them.