Steam is a Merlin/Arthur story by new_kate (~40,000 words). It's a Renaissance-era post-apocalyptic steampunk AU set 300 years after canon timeline. The story was written for Paperlegends, the Merlin Big Bang challenge in 2010.

Summary: It's been centuries since King Arthur united Albion and lifted the ban on magic. Ruled by Pendragon dynasty, the kingdom had prospered till a feud between the magicians and King Uther the Second drove the country to the brink of collapse. Now it's up to Prince Arthur and his Knights of the Engine to harness steam power to replace the magic Albion had lost, and it's up to Merlin to protect Arthur while he fulfills his destiny.

The fanart for this story was made by aqualillium who created three beautiful illustrations that took 60 hours of work and also made icons and banners based on the illustrations.[1] All the banners and icons are displayed somewhere in the story as chapter and passage separators. The art itself is featured separately in the artist's journal. The third picture contains a story spoiler. 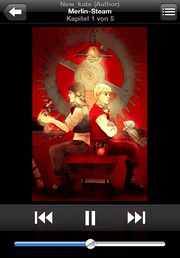