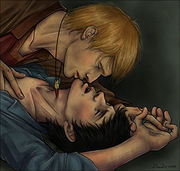 On Edge by lizardspots (2009). This fanart was a runner-up in the category Best Romantic Situation at the Merlin Slash Awards.

Merlin/Arthur is the most common pairing in Merlin fandom.

Shortly after the first episode aired in September 2008, Livejournal exploded with Merlin entries and the squee about the slashy subtext was loud and clear. There were sparks between Merlin and Arthur right from the beginning and many fans saw their dynamic in the first series as the same type of romance that is often featured in classic love stories[1] when characters who appear to strongly dislike each other at first turn out to be strongly attracted after all. The dialogue added to the subtext because it was suggestive[2] and the Slash Dragon promised Merlin and Arthur a great destiny together.

When Merlin saved Arthur’s life for the first time and became Arthur’s manservant, their relationship gained domestic qualities that are usually a slasher's dream come true. By the second episode Merlin dressed and undressed Arthur, made his bed (first seen in episode 7, The Gates of Avalon), washed his clothes, brought him his meals, polished his weapons, and they bickered like a married couple. In episode 4 (The Poisoned Chalice) they were already willing to die for each other, Merlin drank poison to save Arthur and Arthur risked everything to save Merlin’s life.

When the actors of Merlin appeared at the Expo in London to meet their fans for the first time (the same day episode 6 aired), the very first question from the audience was: "Is there a secret love relationship between Merlin and Arthur?"[3] The Daily Star later brought an article about it with the headline Campalot And The Court of Queen Arthur.[4][5] The article misidentified the mostly female audience as gay men but showed that TPTB were acknowledging the homoerotic subtext:

The young wizard and the heroic Prince Arthur appear to be getting far closer than in previous versions of the mythical story of Camelot. The show’s producer and co-creator Johnny Capps revealed the growing army of gay fans wouldn’t be disappointed by the rest of the series. He said: “It is a very, very intense friendship. All epic tales have some elements of homo-eroticism in them, so we were always going to pose these sort of questions.[5]

Episodes 10 (The Moment of Truth) and 11 (The Labyrinth of Gedref) added more depth to their relationship and showed once again how much they meant to each other and what they would do for each other, which made the pairing incredibly tempting. 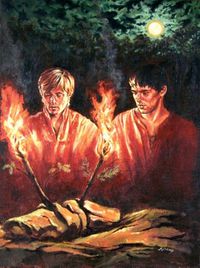 "The Ceremony" (2010) by itzcoatl, a deviantArt artist. This is an illustration for the Paperlegends novel Light of Arthur. The painting shows a handfasting scene where Merlin and Arthur commit to each other for all of eternity.

In those early weeks and months the Merlin/Arthur slash fandom grew incredibly fast. It drew heavily from the established slash fandoms, especially SGA, which was the blueprint for essential parts of the Merlin fandom infrastructure. By the end of November the Livejournal community merlinxarthur had already more than a thousand members. Even more people joined after series 1 had finished and the time between winter 2008 and summer 2009 was incredibly active with a lot of fannish creative output, mostly in fic, vids and art. There were the Merlin/Arthur Fanfic Awards and a Merlin Big Bang that produced mostly Merlin/Arthur results went live in August 2009. Established authors wrote some of the early classics and many newer authors established themselves.

Series 2 brought to some extent a reboot of the pairing dynamic. The dragon was evil and not to be trusted, Arthur's character development was forgotten and most of the Merlin/Arthur scenes were suddenly comic relief instead of intense emotional connection, and all of Merlin's lies meant that the only one left he could really talk to was Gaius.

The more the show moved away from focusing on the friendship between Merlin and Arthur, the more the fandom compensated by focusing more on AUs, reincarnation and Bradley/Colin RPS instead. When the Merlin/Arthur romance in fanworks was strongly based on canon in series 1, series 2 made the fandom excel in writing against or around canon and ignoring anything that could work as a roadblock to the Merlin/Arthur OTP. There was more angst and h/c and the fanfic got darker, but other than that the fandom kept to the series 1 version of the characters. Especially striking this trend is visible in vids where complex constructed realities rewrote the canon in a way that was more compatible with the fannish interpretation. It didn't hurt that series 2 offered many scenes that were perfect for taking them out of context and eye candy to boot.

The changes in series 2 meant that the fandom stopped drawing so heavily from other slash fandoms but it continued to suck in more and more people who were new to Livejournal and fandom in general or came from other parts of fandom such as FF.net, youtube and deviantART. By spring 2010 the merlinxarthur community had more than 5,000 members and Paperlegends, the new Merlin Big Bang, was even more successfull than its predecessor, producing new Fandom Classics such as Light of Arthur, Not In This Land Alone, The Tournament of All Magicks, The Sorcerer and the King and Steam. That was also the time when the fandom really got into enjoying and celebrating itself in several small fests and challenges, often taking place in form of a meme in someone's journal. (See Category:Merlin Fests and Challenges)

Series 3 was not so different from series 2, and some fans were disapointed and sick of Arthur "bullying" Merlin. The fandom saw more fests, more challenges, and Paperlegends once again delivered, this time with gems such as From The Ashes, The Ivy Crown, Nothing Ever Promised, On Tethered Wings and The Promise Within.

Series 4 was a lot happier for Merlin/Arthur fans, with many slashy moments, such as the two-parter in which Merlin once again almost died to protect Arthur, and Arthur was willing to abandon his quest to bring Merlin back to safty, or the (sadly deleted) scene where Arthur gives Merlin a token that belonged to Arthur's mother.[6] The incredibly slashy moments, like when Merlin pulled down Arthur's pants with magic and wrestled him on the floor in 4x04, or pulled Arthur out of bed in 4x07 also caught people's attention, once again leading to amusing observations in the press such as "The success of this mythical hokum rests largely on the love story between Merlin (Colin Morgan) and Prince Arthur (Bradley James)."[7]

Series 4 also saw the return of many fans who abandoned the ship in series 2 and brought in new people from other established slash fandoms. Proving the renewed interest in the pairing, Merlin Holidays impressed in December 2011 with a very strong showing and had the honor of introducing knotting fic to the ever growing pool of tropes in Merlin fandom.

Wrapped in Warmth by lizardspots (2010) shows the trope of "sharing body heat" which inevitably leads to more, especially in winter when the whole castle is freezing and Arthur's bed is the only warm place for Merlin. Note: Marked as sexually explicit; minimized. Click image for bigger version.

With a canonical magical bond between Arthur and Merlin[8], Merlin being Arthur's manservant, both of them risking their lives to save each other, and Merlin needing to keep his magic a secret (or Arthur's father will kill him), the fandom loves its tropes. A lot of interesting stuff happens in Arthur's chambers or out there in the woods. Alcohol, magic and drugs make them lose their inhibitions, fighting can work as foreplay or they need to share body heat. Some of the more common tropes are:

Most stories deal with their great destiny which fits perfectly into a slash romance. Their friendship is characterized by being equals in power despite their differences in status and Merlin is often described as the only one Arthur can truly be himself with.

Kissing scene from the vid, Bad Romance by Nuarity. 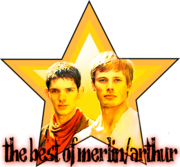