MERLIN is a Merlin/Arthur slash AU fanfic by moonythestrals, posted in two parts on November 6, 2008, while the first season was still being aired. It is approximately 11,600 words long and has the subtitle An Exercise in Script Writing by Two People Who Really Shouldn't Even Be Trying.

In MERLIN, the four young main characters are college students. Arthur takes the role of a frat boy studying business, while Merlin is an Engineering major. After some initial resistance they have to work together on a script for a 'Screenwriting Workshop' and decide to write about their mythological namesakes and even invent a dragon character based on the professor who gave them this task.

This fic was one of the first major Merlin AUs and contributed to the development of the college!AU trope in the fandom. Particularly it was one of the first stories to use the last name of John Hurt, the Great Dragon's voice actor, for the dragon character in the AU setting. Like many modern AUs it incorporated the use of emails and text messages into the story body. 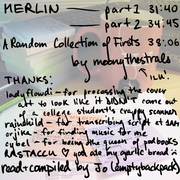 For a while MERLIN was the story everyone recommended as the 'must read' AU in the fandom until later that year Rageprufrock's Drastically Redefining Protocol started to take over that position with each new part that was posted. At the 2008 Merlin/Arthur Fanfic Awards MERLIN won first place in the categories 'Crack Fic', 'Humour Fic', and 'Other Male Characterisation (Will)' and was a runner-up in the categories 'Alternate Universe' and 'Overall Fic'.