Drastically Redefining Protocol (short: DRP) is a Merlin/Arthur slash AU novel by Rageprufrock. It was posted as a WIP in serial format on Livejournal with the first part published in December 2008[1] and developed quite a following. Although it started as a text-only story, it turned into a multimedia fanfic event.

Summary: "In which Prince Arthur meets Merlin and all hell promptly breaks lose."

In this AU Merlin is an intern at a hospital in London and Arthur is the Prince of Wales. A chance meeting leads to more, and it plays out exactly as one would expect in a fairy tale with paparazzi, outing and a happily ever after.

From the author's notes about the multimedia aspects of her story and the people involved:

This story absolutely would not have happened without the time and handholding provided by The Hoyden, who fell in love with Merlin with me and warned me not to watch certain episodes without adult supervision; Zoetrope, who made this staggeringly good trailer for the story but—more importantly—laughed at my jokes and Moonklutz, who endured my raving about this story, entertained my more insane flights of fancy, exacerbated the problem, and then helped me populate pretentious Vanity Fair article with images. And then there are the rock stars that helped to turn this story from a tragic, washed-up narrative into pictures with words in between them: Stellarmeadow, who imagined Arthur's iPhone, risked his one-of-a-kind watch, captured his Pudsey-related agony, and then splashed his royal face all over Drudge; Mei laid out the morning papers and then came into tighter focus with the Guardian, The Sun, and inevitably, the New York Times; Vickie jotted up Arthur's—okay, Allistair's—royal diary; Dramaphile showed us that we thought Arthur and Merlin's affair was delicious; Goat_Song gave life to our ALLCAPS with some Oh No They Didn't! action; Sissi seasoned the whole story with Microsoft Art jizz and Xcaliginous brought this to life on the most important media source in the world, Gawker. I hope you enjoyed reading this even a tenth as much as I enjoyed romping through St. Bart's, stealing lighters and expensive watches, sharing first kisses that make you sigh, and choosing, over everything else, to have your happily ever after.

DRP quickly claimed the place that the earlier crackfic AU MERLIN held in the affection of the fans and became the story everyone recommended to those who joined the fandom after DRP was finished.

DRP won at the Merlin/Arthur Fanfic Awards 2008 in the categories Best Alternate Universe Fic and Best Work-in-Progress and it won the Spring 2010 Merlin Slash Awards in the "Fanfiction: Arthur/Merlin" categories Best Epic and Best AU. 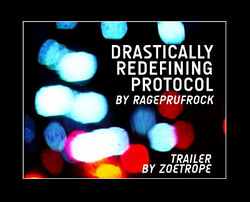 Zoetrope created a 1:13 min fic trailer for DRP[2][3] while the story was still in progress. The last part of DRP with all its multimedia elements was fittingly published as part of 14 Valentines on February 14, 2009.[4] The story contains as embedded elements fake headlines and speculations from The Sun, a short Daily Mail article with gossip about what Arthur might be up to after a disappearing act in a children's hospital and his rumored disappearance during a state visit to Denmark, and an ONTD entry with even more rumors. Later in the story there are excerpts from Arthur's Royal diary and after some incriminating pictures hit the news, another ONTD entry with thousands of comments.[5]

Other embedded media reactions include headlines and short articles like "Prince Arthur in Gay Scandal" (Drudge Report), "Prince Arthur Fucks Dudes", "Gawker Exclusive: His Majesty's Twinkmails!", a news item from AP London, and a screenshot of the delicious main page with the most popular bookmarks being the already mentioned news articles and fannish reactions like a "New LJ Comm: Queen Arthur" with already several hundred bookmarks, the probably first RPS for the pairing: "I Cannot Believe I Did This: Arthur/Merlin WHAT SHUT UP YOU" (labeled arthur/merlin, rps, slash, nc-17 smut), and a "Prince Arthur/Merlin comment thread: It's not RPS if it's REAL".

The story ends with articles about the wedding between Merlin and Arthur. The Sun describes it as "Arthur Bags His Prince Charming: A FAIRYtale COME TRUE!" while The New York Times gives some insight into the broader meaning of the event and writes "In the Cultural War About Gay Marriage, a Wedding Opens a New Front". The most impressive piece of the media puzzle is the epilogue to the novel, written as a brilliant six page VANITY FAIR article.

And They Lived Happily Ever After. Mostly. 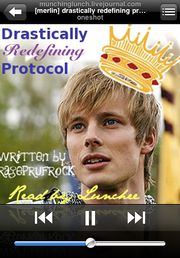 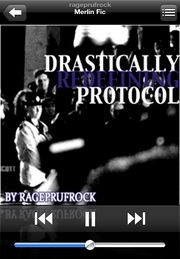 Pentapus made a chibi cartoon illustration[6] of Merlin and Arthur from DRP and zoetrope wrote a fanfic set in the DPR universe.[7] Xenakis later made two illustrations, one of Arthur and Merlin from DPR[8] and one of Everett and Astrid, two OCs from the sequel Five Secrets That Ought to Be Kept (And One for the Road).[9] In 2010, revolutionaryjo created a podfic version of the story.[10] Lunchee repoded the story in 2011.[11] This version is more than an hour longer than the first podfic version and it includes sound effects.

Sequels to DRP written by Pru include:

Pru also wrote a untitled WIP snippet on May 26, 2009 set in this universe. In 2011 she wrote DRP Wedding for The Merlin/Arthur Royal Wedding Comment Ficfest which was immediately podficced by both revolutionaryjo and Lunchee.[13]