Modern Royal Family AUs are Modern AUs in Merlin fandom where Arthur is the British Prince of Wales or belongs to a fictional royal family. Merlin is usually a commoner and magic may or may not be part of these stories. 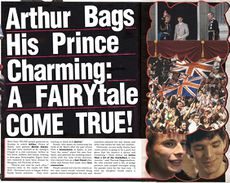 Britain Boys (~39,000 words) - Prince Arthur didn’t care much for the new Prime Minister’s son, Merlin, and would rather spend as little time with him as possible - and the feeling is mutual. But when they’re kidnapped together, they don’t get much of a choice. (Kidfic, the boys are 12/13, written for Paperlegends 2011)

Drastically Redefining Protocol (~46,000 words) - In this AU Merlin is an intern at a hospital in London and Arthur is the Prince of Wales. A chance meeting leads to more, and it plays out exactly as one would expect in a fairy tale with paparazzi, outing and a happily ever after.

The Great Kissing Affair (How Crown Prince Arthur Won Most Snoggable Two Years in a Row) (~5,500 words) - Merlin is an actor with a new found status as sex-symbol and Arthur's ex just told the press that Arthur is a terrible kisser. "We hear you’re this year’s Most Snoggable title-holder! Perhaps you could give the Prince a lesson?" (written for kinkme_merlin) 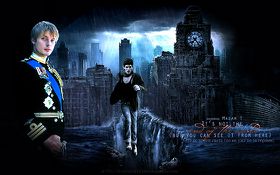 one of two illustrations for the Russian translation of It's not the end of the world (but you can see it from here), manip by adavidoff1 (2011)

It's not the end of the world (but you can see it from here) (~33,000 words) - Arthur, Prince of Wales, finds it hard to accept that he and Merlin have no future. Then he finds out that neither does anyone else. (written for reel_merlin)

Kings Don't Always Need Advice (And Particularly Not This Much) (~30,000 words) - Merlin is the heir to the throne and he needs to marry or the crown will be forfeit. Arthur is the contender for the throne.

The Lonely King‎ (~57,000 words) - Arthur is the Prince of Wales and Merlin is a school teacher. (written for Paperlegends 2012)

A Man's Best Fortune by rotrude (~29,000 words) - Not wanting to be told he has to marry and marry someone the Royal House approves of, Prince Arthur of Albion decides to find his life partner all by himself. Needing to be liked for who he is, he goes the incognito route. (written for kinkme_merlin) 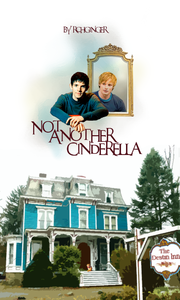 Not Another Cinderella, cover by beeej (2011)

Not Another Cinderella (~34,000 words) - When Prince Arthur of Avalon is photographed with a lad's hand down his trousers his father decides its high-time he learned to be responsible. In the small town of Ealdor no one knows who Arthur Pendragon really is so when Arthur arrives at the Destin Inn and acts like a prat Merlin immediately hates the new, admittedly handsome, clerk. (written for Paperlegends 2011)

Not In This Land Alone (~37,800 words) - When Merlin Emrys gets a summer job at Buckingham Palace, he doesn't expect to even meet King Arthur, let alone become involved in protecting him from a plot to overthrow the monarchy. (written for Paperlegends 2010)

Possibly Maybe I'm Falling For You (~14,000 words) - Merlin walks into his favourite coffee shop one morning to find the Prince of Wales behind the till. His life only gets more surreal from there.

Same River Twice (~22,000 words) - When Arthur, the Prince of Wales, was seventeen, he made a mistake that is still haunting him. Eight years later, can he finally make it right? (written for merlin_holidays 2011)

The Student Prince (~147,000 words) - A modern AU, in which Merlin goes up to the University of St Andrews, to study Physics, Philosophy and History (with a secret dash of sorcery on the side) and finds himself with a most unlikely roommate who happens to be the Prince of Wales.

a whole lot of history (you and me) (~20,000 words) - Merlin's mum gets a job in Buckingham Palace, where Merlin meets Arthur, the Prince of Wales. Starts as Kidfic and follows their relationship through the years.