rotrude is a fan writer known for writing prolifically in the Merlin fandom since at least 2011. The works range in length from ficlets to novellas and are almost entirely Merlin/Arthur works. While some are canon era the majority are Modern AU stories although rotrude's specialty may be Historical AU works. Rotrude's works include prompt responses, gifts, and participation in Merlin fests and challenges such as Coinelot, Royal Wedding Comment Fic Fest and Theme of the Month challenges at merlin_writers, as well as broader events such as the remembering_tex fest and the Fandomaid fundraiser for the Philippines in 2014.

The Heart's Search, posted in June 2013, was written for a kinkme_merlin prompt. The 115,365 word story is a fusion with The Selection Trilogy by Kiera Cass. It is a Merlin/Arthur story and uses significant elements of the original plot including Merlin entering a competition to live in a palace and compete for the heart of Prince Arthur. The story is rotrude's most read work at AO3 and is also the most bookmarked as of 2018.

Playing for Keeps was a Big Bang entry from August 2013 for the final round of Paperlegends. Remarkably this and the previous Heart's Search were two novella length stories completed within months of one another. A Modern AU romance, from the summary: "Royal Philharmonic Conductor Arthur Pendragon thinks he has everything under control, until his solo violinist calls in sick the night of a major concert and he's cumbered with a last minute substitute. The substitute in question, Merlin Emrys, is everything Arthur believes a lead violin shouldn't be: argumentative, riotous, not properly awed by tradition. But he still catches Arthur's eye because he plays beautifully and has an endearing way about him that's not easily ignored. And Arthur does try to stick to that ignoring option hard." The story used the elements of Arthur and Merlin as standouts in their areas, their difficult beginnings, and Merlin learning to follow Arthur's lead while at the same time breaking Arthur out of his straightjacket in a new way.

Ludus was written for a kinkme_merlin prompt in October 2014. From the summary: "Rome, 41 AD. Merlin, physician to Emperor Claudius, is assigned two new patients, gladiators from one of the local ludii. While one of them is open, flirty and talkative, the other isn't. He bears no name, doesn't discuss his past, and isn't quite so accepting of Merlin's bedside manner. He clothes himself in the stoic courage of those who know they're about to die. Until Merlin works a chink in his armour." This historical AU is, at 119,939 words, a Big Bang level story that unspools over continents and places Merlin as both serving and liberating Arthur, believing in his importance and uniqueness.

A Summer in Delphi 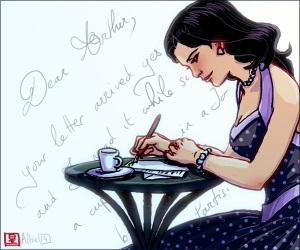 A Summer in Delphi, written for the first After Camlann Big Bang in August 2014 with artwork by Altie, is an example of a Merlin/Arthur story that uses its historical setting for greater realism and a more literary tone as Arthur struggles to come to terms with his sexuality and a life of greater honesty. From the summary: "1952, after divorcing, Arthur is cut adrift, at a loss, and compelled to face very personal issues for the first time in years. As he struggles to come to terms with himself and his past, he embarks on a journey to Greece. It's a quest that for him becomes synonymous with finding himself. On his journey of acceptance and discovery, he meets Merlin Emrys, a young travel writer who appears to be as open as Arthur's can't be." Coming in at 85,484 words, the story has wonderful secondary character appearances that help ground the story.

Search and Rescue is a 77,228 word Modern AU. The story is one of a general strain within the Merlin fandom that transposes Arthur and Merlin's traditional roles in canon to a current English royal setting. In many, Merlin is an assistant, a bodyguard, or another variation of royal servant with Arthur often being a reluctant royal. In this case Merlin's role is drawn from his canon duties as Gaius' assistant while Arthur continues the tradition of a royal with military training. From the summary: "Prince Arthur Pendragon's secondment with the RAF has come to an end. While he wishes to sign up for a second term, his father is against it. With few other viable options aside from taking up ceremonial duties, he enlists to become a civilian air ambulance pilot. On the team is Dr Merlin Emrys. From then on Arthur's life changes in more ways than one." The story was completed in November 2016 and had over 1000 kudos at AO3 as of 2018.