The TV show Merlin is filmed from spring to autumn. As a result, we never see winter in Camelot and fanfiction has filled that gap.

Arthur and Merlin go hunting in a wintry forest, get lost in a snow storm or are surprised by heavy snowfall and have to seek shelter. They encounter winter personified and have to deal with matters of the Old Religion. One of them breaks through the ice and they need to share body heat because of hypothermia. Often it's cold in the castle as well. Merlin crawls into Arthur's bed to stay warm or Arthur asks him to warm his bed. Sometimes Merlin suffers from the cold and Arthur doesn't notice and there is h/c to make it all better. And of course there is the lighter side of winter with snowball fights, holiday spirit, hot mead, and all the activities surrounding the midwinter festival.

Story cover for the 2010 Russian Merlin Big Bang‎ translation of the Box of Magic story They Howl in Dreams of Winter. 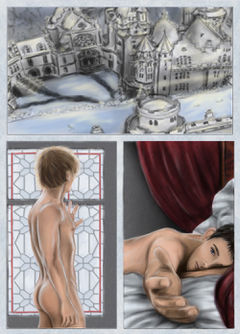 The Light of Dawn by amythystluna. Created for nympha_alba for Merlin Holidays (2011). 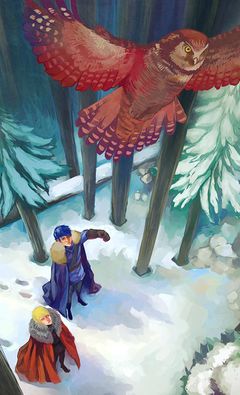 The fandom has produced several holiday gift exchanges that are set around the winter solstice: