Light of Arthur is an epic Merlin/Arthur novel by venivincere (~63,000 words). It was written for Paperlegends, the Merlin Big Bang challenge in 2010.

Summary: A story of gods and man, destiny and choices, loss and gain, and eternal love that’s fixed as the stars to the celestial sphere.

The winter will not end and Arthur and Merlin have to go on an epic Quest through Albion to bring back sunlight and save the kingdom. The author transplants the canon universe from "a land of myth, and a time of magic" into 6th century historical Britain, which makes it either a historical AU or a fusion with parts of the Arthurian Legend that aren't necessarily part of the show's canon and gives it a certain kind of depth.

The illustrations for this story were made by itzcoatl who created truly stunning artwork. Two of the pictures are acrylic on canvas board paintings ("The Ceremony", "Arthur, the Oak King") and the first one is a pen and ink illustration ("The Book"). About "The Ceremony" the artist said: "I enjoyed painting this picture so much that I got rather carried away and put a moon in it. However the sky shouldn't actually be moonlit in this scene. I've posted the whole version here, complete with the erroneous moon, however when it comes to the story, you should imagine the sky cropped out of it."[1] The art embedded in the story is a cropped version without the moon. 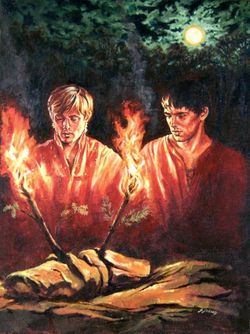 "The Ceremony" by itzcoatl. This painting illustrates one of the most memorable moments in the novel, a handfasting scene where Merlin and Arthur commit to each other for all of eternity. The scene in the story isn't actually lit by moonlight and the embedded art is a cropped version without the moon.

Arthur held the torch to the oak brand and set it alight, then handed the torch to Merlin. Merlin touched it to the pine brand, and it crackled alight immediately. He put the torch on the ground and snuffed it out so that the only illumination would come from their offering to the Lady.

"Imagine you could take the children's TV show we call Merlin, but make it more mature, more authentic, and take the adventure to a higher level of real and gritty and yet by turns tender and romantic. That's exactly what venivincere has done. [...] What sets this story apart for me is the attention to detail. It's not a difficult read, not bogged down with its historical accuracy. Yet the sheer medievalness of it is woven so effortlessly into the telling that it feels like the reader is there, seeped in a time and place where the people are tied to old gods and the weather and the cycle of the seasons. It's lavish, rich and compelling. Then, bleak and nerve-wracking by turns. Everything is well-paced, from the action to the quiet, tender moments."[3]

"I am truly breathless after reading this epic. It is by far the best plotted Merlin story and most well written prose I have read in this fandom. Your imagery is majestic, but your characters so intimate. And I love the balance you weave between historic fact and fiction. The boys are so sweet, almost innocent, as they explore their maturing love and devotion to each other. How you explore that growth in the adventures and hardships they face is amazing."[4]

"This was really a great story; I liked the portrayal of the Christianization in that indeed, a lot of people in 500 AD would've gone "oh so he's a new god, then? Pray to him for a harvest, do we?" and would've had trouble grasping the monotheistic church-based aspects of it. The pacing of the story was excellent too, and the whole thing has a very mythical sort of feel to it where you know in your head that it's a volcano's ash cloud but you want to believe that it was indeed the Great Dragon bringing death to Uther and Albion for the purging of dragons."[5]

"I spent the better part of an afternoon reading this and I have to tell you it was an amazing read. The language you chose for this-- the tone of it, the style-- it feels like an epic story, feels like it belongs in the Arthurian legends. I love the history you've woven into it, and the holidays, and I love that you've let them belong together, because here it's so obvious that they do."[6]