Camelotsolstice is an anonymous gift exchange celebrating all pairings from BBC's Merlin. The fest includes het, slash, femmeslash, RPF/RPS and gen fanfic as well as fanart and the community header says, Celebrating the Winter Solstice in Camelot - A Merlin Multi-Ship Fest.

Stories must be at least 1000 words in length and all art must be the equivalent to that and no entry may be a sequel or continuation of another work already started unless the giftee has asked for one specifically. The complete rules are listed in the community-profile[1] and in the community.[2]

Wrapped in Warmth (2010) by lizardspots. Merlin/Arthur fanart created for robotic_flowers. This was a pinch hit that took 6 hours, from first sketch to finished product. Funny trivia: In the originally posted version Merlin's cockhead was the wrong way round. (the above linked version includes a link to the original *g*) NOTE: If you want to see their faces, the furs, the fireplace in the background, the nightstand, the curtains, the clothes on the bed or any other details, click the image to see it in full size. This image has been minimized because it shows Merlin's cock and is therefore sexually explicit. But never mind...

This is Merlin's cock from the first version of the image. It is the wrong way round which is either anatomically impossible or makes it look like Arthur's hands are on his own cock instead of Merlin's. Anons with sharp eyes saw this and brought it up in an anon meme.

The artist fixed her little mistake and turned Merlin's cock around before she posted it to her own journal. This is the new and improved version of Merlin's cock. 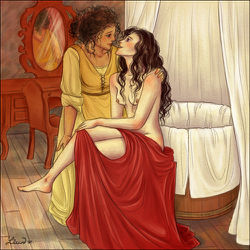