In Merlin fandom, OT4 can refer to friendship or a romantic or sexual relationship between the four main characters, Arthur/Merlin/Gwen/Morgana. It can also be used for other combinations of pairings, such as a fanfic about Arthur/Merlin and Gwen/Morgana, or a vid featuring Gwen's relationships with Morgana, Merlin, and Arthur. OT5 usually means the OT4 plus Lancelot. The names OT4 and OT5 are sometimes used for other foursomes and fivesomes in the fandom, but usually only tongue-in-cheek.

Many Merlin fans, previously active in Stargate Atlantis fandom, picked up the term OT4 via exposure to the ship John/Teyla/Rodney/Ronon.

From the beginning of the series, despite some conflicts (such as class differences and the need to keep magic secret) there was affection and solidarity between the four young characters. (more on general shippiness and prettiness)

When Lancelot first appeared in episode 1x05, he expressed special admiration for Gwen but seemed to fall in with the generally shippy dynamic and so the OT4 was expanded to include him, even though he did not appear again until 2x04.

Episode 1x10, "The Moment of Truth", in which the OT4 traveled from Camelot to Merlin's home in Ealdor, was important for shippers because it changed the dynamic between them. Away from the castle, they were able to interact more easily. Arthur in particular showed new appreciation for the hardships of Merlin and other poor people, and Gwen and Arthur had one of their first significant interactions, which set a precedent for Arthur/Gwen developments in series 2.

The final shot of the four characters heading back to Camelot has been used in many icons, wallpapers, and vids, although less so since it was revealed that it used stunt doubles. (Anon meme link)

OT4 in Merlin fandom includes both Gen and fiction with sexual relationships because the lines are hard to draw. Also, frequently OT4-ish pieces are really the two pairings Merlin/Arthur and Gwen/Morgana that complement each other. Usually one of them is the primary and the other the secondary pairing. 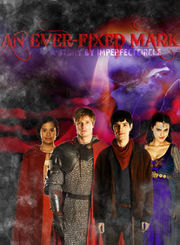 cover of An Ever-Fixed Mark