Box of Magic is a Merlin Big Bang challenge. The sign-up started in February 2009 and the Big Bang challenge went live on August 5, 2009. Big Bangs are a return of newer online posting formats to the old zine tradition of collaboration between artists and writers. 127 writers and 68 artists signed up; 23 stories (most of them slash) with a final word count of 945,736 words, and 72 pieces of fanart (by 38 artists) were submitted.

The different layouts of the site were made by Glockgal and Lizardspots (Skin 1), Elli (Skin 2) and Beeej (Skin 3).

Summary: "Tony O does not befriend losers. Tony O is not gay, not crazy, he is not particularly nice and he is most definitely not royalty. Destiny disagrees."
Art: b/w drawing of Merlin and Arthur by ladykuja, M/A art collaboration by xenakis and Yue KX, wallpaper by likeasugarcube.

Box of Magic website, banner by Elli. At the bottom of the page is an art cloud and a story cloud to navigate the Big Bang.

Summary: "(OT4) Morgana-centric future fic. When a frightened, wounded little girl arrives in Camelot claiming to be the daughter of the king's sister, Arthur, Gwen and Merlin's previously peaceful lives as king, queen and advisor respectively are thrown into dissaray. A desperate manhunt is launched to retrieve Morgana, who disappeared eight years previously - but finding her proves to be only the first in a series of events primed to devestate the lives of those highest in Camelot's court. Where has Morgana been for eight years? Who fathered her child? Who - or rather what - is now out for her blood? And is everything really quite what it seems in Camelot itself?"
Art: 2 color drawings and 2 fake pages of an old manuscript by Berlinghoff79, 4 color drawings by mawaridi.

Summary: "Men are being slaughtered Camelot. Morgana knows Arthur will die by this murderer’s hand. Merlin refuses to let that happen. Even if it means calling forth help from the future."
Art: Fanfic cover/poster and fic trailer by breakingbeads, cast of characters from dameange.

Summary: "You can't be serious. Your name is Merlin, and you work at Camelot theme park?"
Art: Fanfic cover by gblvr.

Summary: "University AU. Merlin came whirling into Arthur's life and left everything in shambles on the floor - literally. They couldn't be less alike - Merlin with his computers and his easy, goofy grin, Arthur with his breeding and his need for everything to be in it's place. They have nothing in common besides a key to the same room, but as the academic year progresses and Arthur finds himself wearing tiaras and critiquing Westlife and having picnics on his living room floor, Arthur comes to learn things about himself he didn't even know he didn't know."
Art: "Indoor Picnic (with close-ups)" by glockgal (color drawing).

Summary: "(Arthur/Merlin, genderfuck) After Nimueh's death Albion needs a High Priestess, but what it's got is Merlin. Fortunately he'll serve after a few...modifications. Unfortunately for Merlin, being turned into a woman would be enough of a shock even without becoming the High Priestess. As is, it's his duty to sleep with the king or doom all of Albion."
Art: Cover drawing by Korilian, color illustration by brille (photoshop/drawing), color illustration of girl!Merlin by chaosraven (Painter 9.5).

Summary: "Modern AU. Arthur and Morgana are Metropolitan police officers drawn into a strange case involving robbery of ancient artifacts. Merlin is a graduate student at Imperial College studying the healing plants of Ancient Britain under Gaius – or at least that's what he tells everyone. Soon they, along with Gwen, Lancelot and Uther, will be facing a battle for the future of the country. Can they defend the realm from those who would seek to destroy it?"
Art: Fanfic cover by ras_elased, 6 illustrations in acrylic on cold press illustration board by wheres_walnut. 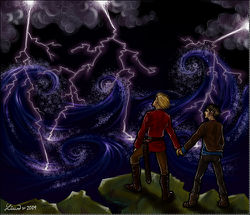 Summary: "In the aftermath of Merlin's battle against Nimueh, the rain seems a minor complication, perhaps even a cleansing influence. When the rain doesn't stop, Camelot is pushed to the brink once more. This time, Arthur may be in over his head. Contains: a lot of wet boys in emotional scenes (yes, Hollywood has corrupted me), Arthur knowing more than he lets on, Merlin being an idiot, both of them being a bit stupidly heroic, telepathic chess, rain (lots of), war, making out against a tree, coincidental druids, co-opted history, co-opted myths, magic, coming of age (metaphorically), and more magically annoying yet surprisingly un-floody water than you can shake a stick at."
Art: Color illustration "Campfire" by afterism, color illustration by lizardspots.

Summary: "Morgana is pissed off, Arthur is a prat, and Merlin is Not In Camelot Yet Still Suffering The Consequences. Also known as The Story That Started Out As Emperor's New Groove!AU And Then The Author Started Getting Ideas (Which Never Ends Well)."
Art: Cover illustration and pink Unicorn!Arthur by dramedy.

Summary: "A Merlin-Supernatural Fusion. After a bitter parting and four years of silence, Merlin is contacted by Arthur to help find Uther, who has disappeared on the trail of Nimueh. Merlin is drawn back into the hunt, criss-crossing Britain in a vintage Jag with Arthur at his side, tracking ghosts, spirits, fantastic beasts, and Nimueh, the being responsible for the deaths of Ygraine and Hunith, years before. As well as the hunt, they must deal with their own relationship, and Merlin's special gifts that have begun to re-emerge."
Art: illustration by Suaine (digital painting, blending of photo sources), "Still Got That Spark" by Iambic (digital painting).

Summary: "The 21st century is still a land of myth and a time of magic. The spells and enchantments that Uther banished are gone, but myths and magic live on, conjured on screens large and small with scripts and CGI. But one day, inspired by boredom and not a little mischief, an entertainment mogul (who might just happen to be an ex-evil sorceress) decides it might be a lark to tell the Arthurian legend—as it really happened. It's just a little BBC series, just something to amuse herself (and to annoy Merlin, of course). But when they awaken the Old Ways, not even the greatest Seer of all can foretell what awaits them. This is a story of destiny and choices, about what happens when sorcerers and kings collide with actors and beasts, and just how bad morning breath would be after a 1500-year sleep."
Bradley: "Are you doing that, Colin?"
Colin: "Yeah."
Bradley: "Yeah, I thought it must've been. I like the way you're dedicating yourself to this role. He's actually physically learnt magic."
Art: Photoshop fanfic cover and 4 banner by chosenfire28, fic trailer by mamoru22.

Summary: "When the cure for magic is found, Uther Pendragon makes it his personal goal to treat every last sorcerer. Arthur gets captured by sorcerers trying to fight for their freedom with questionable methods, one of them is Merlin, who turns Arthur's world upside down and then the rest of the world against them."
Art: Photoshop cover banner and 2 icons by gblvr.

Summary: "A lot of power is released when you kill a sorcerer. Power enough to rend the very fabric of time. Its up to Merlin to change destiny in the only way he can."
Art: Cover banner by Tigress35, color drawing by Wihluta, 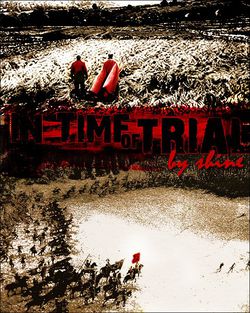 In Time Of Trial, cover by sandrainthesun

Summary: "(Merlin/Will, Merlin/Arthur pre-slash) The life of William of Ealdor, and how he met a sorcerer called Merlin along the way and learned to hate arrogant princes."
Art: illustration by beeej (photoshop). 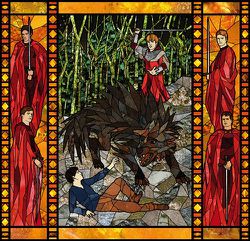 The Worg (2009) by xenakis. Story illustration done in a characteristic stained-glass style for The Mirror, The Sword and The Shield. The center image features Merlin, Arthur and a beast in a scene from the story and it is framed by depictions of Camelots knights.

Summary: "Through daring escapes, attempted coups, and fierce battles, Merlin and Arthur discover that the twisting threads of fate are not easily understood, and that the webs they spin cannot be readily escaped."
Art: Fanfic cover by Korilian (photoshop), illustration by farlights, "The Worg" by xenakis (Photoshop illustration, Church Window style).

Summary: "Merlin thought he had problems when he was only Arthur's manservant, and trying to hide his magic. Now he doesn't have to hide any more, but he wishes things were still that simple. With Arthur gone, he has no choice - and he misses him more than he can bear."
Art: Book cover by thisissirius (photoshop).

A Long Way to Go Before We Are Truly Divine by Staraflur (Merlin/Arthur). Word count: 46,670.

Summary: "Merlin is content, but not exactly happy, in Ealdor, so when his mother's friend Gaius' shows up with a tale of dragons under castles and priestesses and an exiled prince, Merlin is thrilled to listen. The reality, however, isn't so great: the priestess is a killer, the prince is a prat, and the dragon sure does have some curious ideas about them. But Gaius is saying it's Merlin responsibility -- destiny, even -- to help Arthur win back his kingdom, and to evade all the forces amassing against him on the way. This would, of course, be a whole lot easier if he could stand to be in the same village as Arthur for enough time for them to stop arguing."
Art: illustration by nasssty_slyth (structured as 3 panels), 2 color drawings by megaloo13 (illustrations). 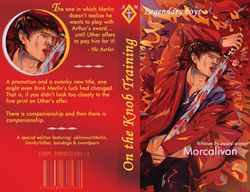 On the Knob Training, cover by Yue KX

Summary: "A promotion and a swanky new title, one might even think Merlin’s luck had changed. That is, if you didn’t look too closely to the fine print on Uther’s offer. There is companionship and then there is companionship."
Art: Book cover (with full image) by Yue KX (photoshop, digital painting). Mature self-service with an object involved aka a special edition featuring: oblivious!Merlin, Smirky!Uther, bondage & swordporn. Color illustration by unavee (digital drawing).

They Howl in Dreams of Winter by snarkydame (Merlin/Arthur). Word count: 20,919.

To You I Pledge, cover banner by lenyia

Summary: "Merlin lays his life on the line to save Arthur yet again, only this time there are witnesses, lots of them. Only Arthur prevents him going to the headman's axe straight away, but Arthur alone cannot save him. That is up to both of them."
Art: Cover banner by lenyia, cover and 2 photoshop illustrations by cybel.

While His Name is Still Spoken by mariana_oconnor. Word count: 48,818.

Summary: "(Merlin/Arthur, background Gwen/Lancelot & Uther/Ygraine) Orpheus and Eurydice, Merlin/Arthur style. When Arthur dies, Merlin refuses to accept that this is how it was supposed to end. He is determined to bring him back no matter where he must go, who he must talk to, or what the cost may be. Meanwhile, in an unknown afterlife, Arthur is struggling to return to the land of the living, but the gods aren't that keen on the idea. He has the aid of Morgana, but she might not be entirely on his side. After all - he did kill her."
Art: Fanmix cover art by randomb33, manip by aesc.