Camelot in Merlin fandom can mean the kingdom or the castle itself.

It can also refer to the Camelot era where the TV show takes place, as opposed to Modern AUs which are quite common in the fandom. Camelot era AUs are usually known as Canon AUs. 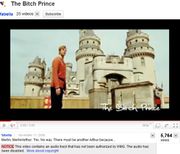 Arthur with Camelot castle in the background. Screencap from the vid The Bitch Prince.

The scenes that show the castle are filmed on location in France where the beautiful Château de Pierrefonds serves as the fantastical Camelot from the Merlin TV series.

Because the castle is part of the French national heritage, it remains open to visitors even during filming, which turned the small village of Pierrefonds into a fannish pilgrimage site for European fans.

Whenever the Merlin crew is filming in France, there are usually at least a few fans visiting the castle who report spoilers and post pictures which helps to keep fannish interest alive during the long hiatus between seasons. However, visiting the castle is also popular when there is no filming going on because then there is no risk of getting spoiled and it's easier to take pictures and have a close look at all the parts of the castle that have been featured in the show.

newkidfan made a 8:52 min vid called A day in Camelot that shows the Château de Pierrefonds, overlaid with scenes from the show to point out what happened where.[1]

The audience hall where Uther welcomes petitioners and foreign dignitaries. Screencap from the vid Dreamcatcher. 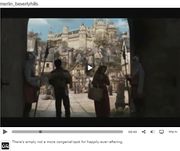 Merlin's first impression of Camelot (The castle is real, the village is CGI). Screencap from the vid Beverly Hills.

Camelot castle is one of the main settings in Merlin fanfics, often describing life in a medieval castle in great detail, and when the characters are outside, for example hunting in the forest, any reference to Camelot usually refers to the castle because that's the place where they live and return to after a long day of work and adventures.

The one season we never see in canon is winter, so fanfiction has filled the gap and fans can read all about winter in Camelot.

In modern AUs Camelot is often a business empire that Uther founded and Arthur is supposed to inherit. In Camelot Industries he even dethrones his father by founding Albion and buying the shares of his father's company.

Camelot can also be everything from a coffee shop to a space ship. For example in Sky Full of Stars, Merlin is a powerful technopath living on board the Camelot where he has to hide his abilities because Lord-Captain Pendragon hates nothing more than the gifted. In Mykonos Camelot is a mythical Sky City no one on Merlin's island actually believes in, but it's real and Merlin is the one who can save it.

Several communities refer to Camelot in their name. camelot_fleet is a major multi-ship community and the Camelot Music Video Awards were a fanvid award in the early days of Merlin fandom. Camelotsolstice is a popular anonymous holiday gift exchange.

The Arthur/Gwen community camelot_love and the Merlin het community camelot_haven are as much at home in the legendary kingdom as Camelot's Closet, the Merlin/Arthur fic exchange. There are also specialized communities like camelot_kink (Because what's more kinky than a fandom that actually has stocks and dungeons?) and camelot_recs.