Summary: "When Merlin uses magic to save Arthur’s life, he is condemned to death, and Arthur is too late to save him. But when the grief-stricken prince, along with Morgana and Gwen, journeys to Ealdor to return Merlin’s ashes, a series of strange events leads them to believe the warlock may not be as dead as they thought."

"I'm an absolute sucker for this kind of fic. Love rolling around in the angst that I know is going to get resolved. (thank you, spoilery smexy art) I also have a thing for guilt-ridden!Arthur who discovers gasp!toolate! that Merlin has magic. I also loved the S1 feel of this whole fic. Brings me back to happy times when I actually thought there was going to be a reveal in midway through S1. Very enjoyable read that hit lots of my buttons."[1]

"Old school Merlin, with Morgana still a loyal friend. Arthur's grief is vividly portrayed and Merlin's return is not too easy, as Arthur learns just what he's prepared to do to have him by his side."[3] 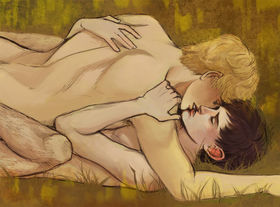 Illustration by catsinthecoffee. Merlin and Arthur in the forest.

"This is gorgeous (and funny)! I really wouldn't have expected so much royal purple in an execution piece, but it is so pretty! It gives the piece that much sadness and grieving instead of the hurt angst more fiery colours would have, and it sets off the other colours beautifully. That thin orange line on what side of the hair with the blueish light on the other side are so fine, along with the subtlety of the tracks on his face. What a great choice of texture (/brush) for the smoke, too! For the second and third, ahaha, I haven't read the accompanying text yet, but these will be my head canon for it now. Morgana's eyebrows! While cat Uther seems just on the verge of taking off after a magic-mouse with a passion. ^^ That last one is guh in gut- and heart-wrenching ways. You really have a knack for outlying backgrounds in quiet but clear textures and colours, while I really like the way you shade that gives skin such texture. The hair is rendered so well, with the strokes giving the strands directions! *_* The pose is priceless, with them really pressing close, and I madly love Merlin's legs. In other words, alksjfskjdghddgj!"[4]