And None But We Can Be Such Kings

And None But We Can Be Such Kings is a Merlin/Arthur slash story by janne_d (Word count: ~8,700). It was one of the first stories that really captured what fans saw in the Merlin/Arthur relationship.

Summary: Merlin really was the court idiot. Was this what the Dragon had meant by halves of a whole? 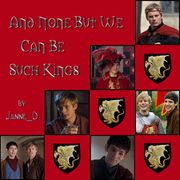 The story won Best Romance Fic in the Merlin/Arthur Fanfic Awards 2008 and was a runner-up in the categories Best Overall Fic and Best One-Shot. thisissirius made it into a podfic[1] and helva2260 created a cover for the story.[2] The design for the cover is based on a wall hanging that can be seen in the background of the image with "The Hat".