Quickening Days is a Merlin/Arthur slash story by Fahye (Word count: ~22,200). It was one of the first longer stories in the early weeks of the fandom and very popular.[1] It won first place in the Action/Adventure category of the Merlin/Arthur Fanfic Awards 2008 and was a runner up in the Epic category.

Summary: "In which dragons & ghosts & prejudices are confronted, Merlin wears a hat (twice) and a dress (once), Arthur breaks some crockery (lots), there are more pranks than pillowfights but at least one of each, and many secrets are revealed."

The summary may sound like crack but the story is far from it. Quickening Day has it all -- serious drama, action/adventure, beautiful romance and a plot that feels right at home in first season Camelot. The story is build around a time loop and Merlin and Arthur have to work together to figure out what is going on. First Arthur learns about Morgana's seer ability which unsettles his world, then there is a crazy dragon, Merlin's magic is revealed and Arthur is forced to question everything he thought he knew. There is anger, hurt, confusion but they are still united by the same goal and it's not magic but power that corrupts -- and Merlin won't let it happen to Arthur if Arthur won't let it happen to him. After some soul searching Arthur realizes that he still trusts Merlin and now they can really get to know each other. The last day of their time loop and the last day of no consequences is filled with playful pranks (including crossdressing) and intimate moments that suddenly turn serious because their feelings are no joke, they are in it for the long run.

From the author's notes:

"This idea jumped me one day, sunk its teeth into my jugular and refused to let go until it was written. Apparently I have a burning need to contribute to the infamous fandom subgenre known as 'Merlin wears a dress'; I just didn't expect it to grow (and grow, and grow, and grow) an actual plot. For everyone who's wondering where the kissing is: it happens eventually! I promise!"

Euphoric_Aria podficced Quickening Days[2] and Cybel turned it into an audiobook.[3] Euphoric_Aria's character voices often perfectly copy the mannerisms of the actors and her dragon screams are just awesome! From her notes: 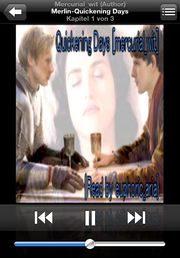 I'll admit, I didn't quite know what I was taking on when I first asked Fahye's permission to record her wonderfully long and plotty fic. I had only listened to a couple podfics at that time, had no idea about what was involved in the recording and editing process. SO! Off I went after reading about two paragraphs about podficcing how-to, armed with garageband, a fake english accent, and a veeeeeery vague idea of what I wanted the characters to sound like.

The first draft of this little labour of love luckily didn't get past the first chapter - the pacing was terrible, the voices were inconsistent, and Merlin insisted on sounding Canadian no matter what I did. I noticed that dialogue was the hardest part for me to get the hang of, so... I took a bit of a break. I recording two other shorter fics with very limited amounts of dialogue just to get more recording and editing experience, and listened to a LOT more podfic.

Fayjay became my role model pretty immediately, and on the subject of accents I posted on a podfic advice community, asking whether people preferred (if given the choice) a Canadian voice imitating an English accent, or just the reader's own voice, reading as best they could. I got some great advice. One person commented that one of the things they liked about podfic was hearing new and different voices - many others mentioned that if I could pull off an English accent for the whole thing, great! But if it hindered my performance then that made it a problem.

I deleted the first draft. Before going back to recording, I considered voices carefully - I decided that rather than try to make all the characters sound like the actors made them sound, I just had to choose a voice that suited them (that I could pull off) and use it CONSISTENTLY for them throughout the entire recording. I did my very best at that.[2]