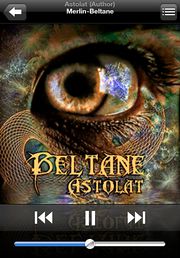 The Beltane Cycle is an epic Merlin/Arthur series by astolat. It merges legend with show canon in a satisfying way and tells a version of the legend that hasn't been told like this before. What makes this version so powerful is that it feels true, as if it couldn't have happened any other way.

The series is named for its first part, Beltane, which was actually the second story posted. The first story posted was That Shall Achieve The Sword which is the third part of the series and was written for the Yuletide 2008 challenge. So far the series has four parts and two further parts are planned.

The Story was posted on Dec 29, 2008 (word count: 1,144)[1], just a few days after That Shall Achive the Sword. This is a piece of backstory that explains Merlin's origins and the explanation of who Merlin's father is fits so well into canon that this or similar interpretations became fanon for many fans before Balinor appeared on the show. 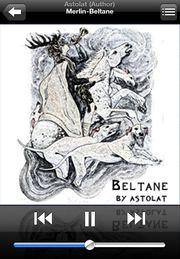 Summary: "There is a story that is not told in Ealdor anymore, not for many years now, a story about Beltane Eve."

One winter in Camelot a squire tells the tale of how a young woman who found pleasure with a stranger on Beltane Eve gave birth to a child of magic and protected her boy from his father, who was none other than Herne the Huntsman. Merlin realizes that the story is about him and the reader can observe Merlin being shocked by this information while no one else seems to notice that something is amiss. The inspiration for Herne came from Susan Cooper's The Dark Is Rising book[2] and the way Hunith protects Merlin is inspired by Supernatural.[2]

Coming of Age was posted a month after Beltane.[7] Word count: 6,168. From the author's notes: "This story is a sequel to Beltane and won't really make sense without reading that first; and these two stories together are sort of the backstory to a larger set of stories beginning with That Shall Achieve The Sword. I'm calling the series the Beltane Cycle for lack of a better name."[7]

Summary: "I have called you to give you a warning," the dragon said. "A red moon rises over Camelot this night. The Wild Hunt will ride." 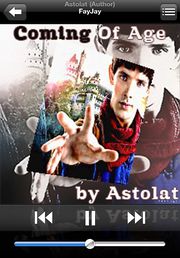 Merlin is coming of age and his father, the Huntsman, is coming for him. If Merlin doesn't return to Camelot before sunset, no mortal power will be able to bring him back and he will ride with the Hunt forever. Arthur doesn't really know what's going on but after the dragon gives him a cryptic warning, Arthur sets out to find Merlin. Here Merlin's heritage is revealed and Arthur would face the old powers to stake his claim on Merlin. No one can see the Wild Hunt ride and live, yet they both choose each other and Arthur does live after drinking from Herne's horn. The story is full of myth an magic and neither Merlin nor Arthur remember anything that happened but their choice might change their destiny in ways that are hard to predict.

A podfic version read by FayJay is available at the Audiofic Archive.[8]

That Shall Achieve The Sword

That Shall Achieve The Sword was astolat's first Merlin fanfic. The story is labeled preslash and was written for Cori Lannam in the Yuletide 2008 Challenge.[9] Word count: 5,836.

Summary: "Arthur had just started to get really irritated, as opposed to the low-grade and permanent Merlin-is-late-again irritation that somehow managed to be endearing -- and how exactly Merlin had managed that, Arthur would really have liked to know, mostly so he could work out how to use it on Uther." 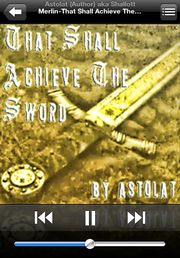 "That Shall Achieve The Sword" podfic cover; cover art by cybel

Merlin reveals his magic in the most public way possible when he fights off twelve powerful sorcerers in the throne room to save Arthur's life. Uther wants to execute him, Arthur won't allow it, and they have to go into exile.

That Shall Achive The Sword was one of the most commented on Yuletide stories in 2008 and the author reveal was eagerly anticipated. From the comments[10]:

I have no words to adequately express how *true* this story feels to me. Except that I wish the show could be this brave and go down this path. And that this is, hands down, my favorite story from this Yuletide. (nicolasechs, 12/28/2008)

this is some of the most romantic gen i think i've ever read. it's also some of the most epic, and i love it to bits. i love the balance struck between the guileless merlin of the show and the fiercely powerful merlin of legend, the mixing of the tones of both telly show and legend that's done without muddling either. you're amazing, mystery author! (antihysteric, 12/28/2008)

Wow! I was caught up in the action of this right away, and I love the issues with the court divided and the necessary exile and, most importantly, the Arthur-Merlin interactions. (lynnmonster, 12/29/2008)

This is probably the best Merlin story I've read thus far; it dispenses with a lot of the build-up and just gets to the heart of things in a very satisfying way. *Very* satisfying. And Arthur's characterization feels spot-on. Lovely. (Destina, 12/25/2008)

The author's notes already indicated that there would be a sequel but first the two prequels Beltane and Coming of Age were written and delivered the build-up and backstory for That Shall Achieve The Sword. A podfic version read by Fayjay and posted on the same day as the Coming of Age podfic[11] is available at the Audiofic Archive.[12] That Shall Achive the Sword was translated into Russian by Ratatosk.[13]

An Exile In Albion 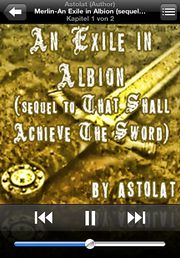 "An Exile In Albion" podfic cover; cover art by cybel

Summary: "Arthur in Ealdor was like a tame lion at the dinner table: you weren't necessarily worried you were going to get torn to pieces, but it was still dangerous, decidedly out of place, and made the neighbors nervous."

In That Shall Achieve The Sword Uther had banned Arthur from Camelot, never to return as long as he lived. Now Merlin, Arthur and a few of his knights have to figure out where to go and what to do. After a short stop in Ealdor they realize that they need resources and funds and the best way to get them is to win the prize money in a tourney. So they travel to a neighboring kingdom as knights-errant of no particular (announced) name and the adventure begins. Arthur can prove himself as a knight and Merlin can openly act as Arthur's wizard for the first time. An Exile In Albion has sword fights, a tourney, magical battles and court politics, but it has also great character development and allows Merlin and Arthur to recognize each other as equals and to act on all the UST between them. This is where the story was going from the beginning and to finally get there is both satisfying and rewarding.

One of the great strengths of An Exile In Albion is that it offers an explanation as to how Arthur will become the king we know he is meant to be. It's not from behind Camelot's walls that Arthur is going to unite Albion, it's in exile where their names start to become legend.

I love this. Merlin who is both completely ridiculous and full of power. Arthur who knows exactly what to do and how to do it, but is a bit of a git anyway. And then all the little pieces that fall around it, like Gaius's exasperation with Merlin changing the rules of scrying without even knowing. (abbylee, 11 Feb 2010)

you did such a great job illustrating Arthur's career as a knight errant. I loved all of the details you included, from Arthur's new name to the fact that Vortigern wanted to make sure the prize money didn't go to the band of newcomers. You managed one of those stories that seems completely realistic -- more so than the TV show itself, in a way. (Piscaria, 12 Feb 2010)

I love the way you wind the normality of Merlin & Arthur (them bickering, Merlin not knowing what's going on, Arthur being a prat :) ) with the feeling of destiny marching towards them. (juliet, 27 Feb 2010)

Only a few days later FayJay posted a podficced version of the story[15] and it is available at the Audiofic Archive.[16]

"...And so without further gilding the lily and with no more ado, I give to you, the seeker of serenity, the protector of Italian virginity, the enforcer of our Lord God, the one, the only, Sir Arrrrthur of Somerset!"* (*okay, okay, no, it's not actually a 'Knight's Tale' rewrite. But there's a tourney, and there's the pretense of being a knight errant, and plenty of swashbuckling and valour and backchat from servants. Also, a dragon. And cute boys snogging. It's all good, my friends.)[15]