Footloose is a fan writer known for their lengthy and well received Merlin works and their recurring collaborations with artist mushroomtale.

Footloose included the following in their AO3 profile: "I've been asked this a lot, so I'll just say it here. I absolutely love fanworks of any kind based on anything that I write. If something I've done inspires you, I consider that to be a tremendous compliment. You don't need to ask my permission, but I only ask that if you post it somewhere, you link back to the original work and that you let me know, so that I can share it with others!"

Footloose's work is often lengthy and can be most easily accessed through their AO3 account where it can be read individually or by series. There are 11 series as of 2018 and nearly all works are in the Merlin fandom. Along with an assortment of other Merlin stories, Footloose has also written well received stories in the larger Harry Potter verse and Teen Wolf.

Footloose's best known work is the Loaded March series, which began in 2011 with the "Radioman" installment. This Alternate Universe story sets the Merlin characters in the British SAS as a team headed by Captain Arthur Pendragon. The story begins when Merlin joins Team Excalibur as a communications specialist. The series mingles characters from the series with what are essentially original characters who have appeared in traditional Arthurian tales. The stories are detailed and bring to life the experience of soldiers in a conflict as well as the difficulties of dealing with the military/intelligence industrial complex, as well as military hierarchies. Footloose has also written and posted timestamps in the verse to commemorate veteran holidays.

Loaded March is a massive work, comprising 1,261,720 words in 16 installments the last of which was completed in September 2015. There are also 23 extra stories so far that are part of the verse. Various related works exist, notably the podfic that EchoDeltaNine recorded of the first two installments in the series. 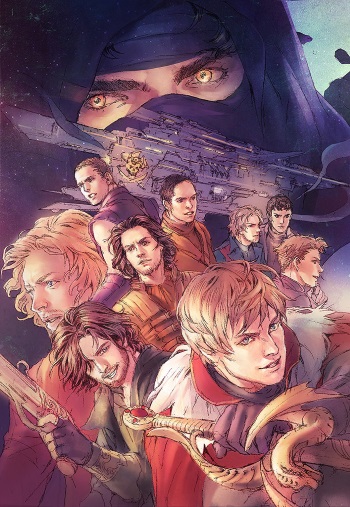 Shadowlord and Pirate King is an over 200,000 word Merlin Space Pirate AU completed in 2013, with extensive artwork by mushroomtale. From the summary: "A fast ship, a good crew, a treasure, a Clan to lead -- that's all Arthur Pendragon has ever wanted. He sits on the Council, he supports his father's kingship, and he keeps an eye on the Imperial Conglomerate when they come too close to Pirate space.

One day the Conglomerate infiltrates the Clans and poisons the King. Arthur must search for a cure to keep his father alive and the Clans from civil war.

An escape route, a sharp knife, a target, the shadows at his command -- that's all Merlin has ever needed. He fulfills his assignments, he uses the Sterling to sustain his once-royal House in their exile, and wages a private war against the Imperial Conglomerate."

May the Fourth series

The May the Fourth series of short fics is an annual tradition Footloose carried out between 2013-2017. The stories for this Merlin-Star Wars fusion were posted once each year to celebrate the May the Fourth holiday. 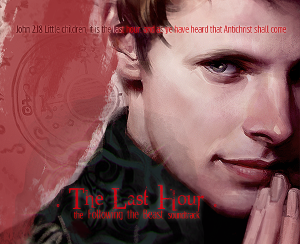 The Wicked Man series was a contribution by Footloose to the 2015 Merlin Horror fest with artwork and a fanmix by mushroomtale. To date the series has only one story, the 66,321 word "Following the Beast." However, the story marked another genre shift in Footloose's Merlin work. From the summary: "Arthur's young. His power has yet to mature. All the allies he has made and the loyal men who follow him won't be enough to protect him until he can build the Kingdom he has dreamed of since he was a child.

He needs the help of the person who makes angels and demons quaver in fear at the mere mention of his name. Of the broken, down-trodden man who is now a pale shade of the terror he had been decades ago. He needs Merlin, and Arthur has every intention of making Merlin his."