From Fanlore
(Redirected from Animal transformation)
Jump to: navigation, search 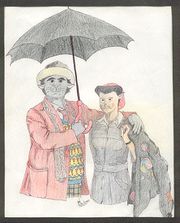 interior art for the Doctor Who zine The Cat Who Walked Through Time: artist: eccentricone 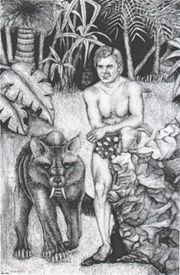 art by Maggie Symon from the zine, Children of the Sun Aliens transform Spock into a sort of giant sabertooth wolf-thing (called "Gral") as part of an experiment.

Often though not always such stories are considered crackfic, but they may be especially long and involved specimens of the genre. (Fic about characters cast as or being turned into inanimate objects or ideas is sometimes called Anthropomorfic.)

Although examples can be found for an enormous variety of animals, the most common types are pets, especially cats.

The animal transformation trope may be even more popular in Japanese fandoms than in Western ones; many doujinshi feature characters as animals, drawn either with selected animal features (as in the ears and tails of catgirls) or completely changed. When a character has only the animal ears and tail, it's known as Kemonomimi.

Fic set in fandoms where it is canon for characters to turn into animals, such as Harry Potter animagus fic or stories about other fantasy or comic characters with shapeshifting superpowers, usually are not called animal transformation fic but labeled with the universe's term. In Fullmetal Alchemist, for example, there are canonical attempts to fuse humans with animals (typically with tragic results); the resulting creations are called chimeras.

Because The Sentinel has canon examples of spirit animals, both Jim Ellison and Blair Sandburg are often portrayed as transformed into a jaguar and wolf respectively. 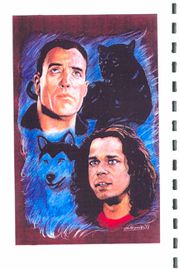