You might be looking for the character Agent Peggy Carter or Agent Sharon Carter. 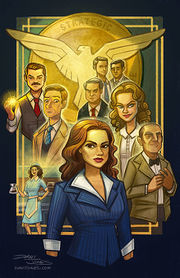 Agent Carter is a Marvel television show that is part of the Marvel Cinematic Universe that ran from January 6, 2015 to March 1, 2016. The show focuses on Agent Peggy Carter.

The original short film was released on Iron Man 3's Blu-Ray disc. It takes place a year after Captain America's disappearance, with Agent Peggy Carter a part of the SSR, where she has been assigned to desk duties instead of working in the field. However, one night while she is alone in the office, a call informs her of the location of a criminal organization known as Zodiac. Peggy goes by herself and succeeds, much to chagrin of Agent Flynn. When the telephone rings again, Howard Stark is on the other line and informs Flynn that Peggy will be the co-head of S.H.I.E.L.D.. Dum Dum Dugan cameos at the end.

The fandom had already started prior to the series premiere on January 6, 2015 as early as April 2014[4] due to the excitement of a Marvel female lead show and various clips and photos released. It also helped since the Peggy Carter appeared in Agents of S.H.I.E.L.D. Season 2 episodes, allowing fans to see a glimpse of what the series could entail. However, it wasn't until after the premiere that the fandom really started picking up for the series, especially on Tumblr. Many praise the character of Peggy Carter and Hayley Atwell's performance, as well as the show in general.

After the final episode of the miniseries, there has been a push to get the show renewed on both tumblr and twitter.

Getting Peggy a show in the first place

Fan campaign on Twitter in spring 2015 for ABC to renew Agent Carter for a second season. Organized on Twitter and Tumblr. Ultimately successful.

Cartinelli shippers were very vocal in this campaign.

Renewed in spring 2016 to push for a season 3, whether on ABC or another platform, such as Netflix. Ultimately unsuccessful.

Fan campaign on Twitter in autumn 2015, following cast announcements with no mention of Lyndsy Fonseca, who played Angie Martinelli in season 1. Organized on Tumblr and Twitter.

[Did this have anything to do with the musical dream sequence in episode 9?]

Prior to the premiere, the main pairings were Peggy/Steve Rogers since the series would take place after the Captain America: The First Avenger, and Peggy Carter/Howard Stark due to known friendship between the two in the film and a released clip where Howard asks for Peggy's help. The Peggy/Steve pairing has remained popular after the premiere.

Since the premiere, many fans have started showing interest in the femslash pairing of Peggy Carter/Angie Martinelli. In fact "Cartinelli" is now the most popular ship in the fandom, even eclipsing Peggy/Steve. The relationship between Peggy Carter & Edwin Jarvis (as gen or a het pairing) is also very popular.

Originally, there was some Peggy Carter/Daniel Sousa interest, and rarely any Peggy Carter/Jack Thompson. However, the pairing Peggy/Jack gained a lot of following after the fifth episode. Daniel/Jack slash pairing also gained some interest, especially due to their ship name "Jack Daniels" (due to the Jack Daniel's, a popular alcohol brand) and after the sixth episode, the pairing Angie/Jack started to appear.