Peggy Carter is a character from the Marvel Comics series Captain America.

The character first appeared, unnamed, as a wartime love interest of Captain America in Tales of Suspense #75 (March 1966).

During the House of M event, Peggy Carter was married to Steve Rogers.

Peggy is portrayed by Hayley Atwell in the MCU. Peggy first appeared in Captain America: The First Avenger. She again later appeared in a Marvel One-Shot's Agent Carter, where Howard Stark invites her to join S.H.I.E.L.D.. She next appeared in Captain America: The Winter Soldier (2014). In late 2013, there was talk about having a Agent Carter television show,[1] which was later confirmed[2]. Marvel's Agent Carter premiered on January 6, 2015. The show ran for two seasons, but was [3] canceled on May 12, 2016. Peggy appeared in The Avengers: Age of Ultron (2015) [4] and Ant-Man (2015). The character's final appearance in the MCU was in Captain America: Civil War, when she [5] died of old age. A picture of Peggy makes an appearance in the first trailer for Avengers: Endgame.

The overall popular pairing for the character in any universe is Peggy/Steve Rogers (see "Shipping" for more information). 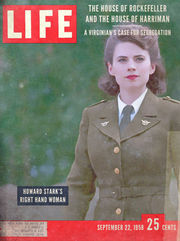 Fandom really took to Peggy Carter and Hayley Atwell in the MCU. Since she was the only leading lady in Captain America: The First Avenger and is a BAMF female character in all her appearances, many fans really took to her.

Peggy Carter/Steve Rogers as a pairing is popular het pairing in the Captain America Movieverse fandom while the pairing is more of a secondary pairing/background pairing inside The Avengers Movieverse. Due to Steve being frozen and lost to Peggy in the 40s, it's common in fanon where Peggy has moved on from Steve (still loves him of course), marrying another man. Originally fanon paired her up with Colonel Phillips, however with the appearance of Antoine Triplett and the canon knowledge that he is the grandson of a Howling Commando many fans accept Gabe Jones as her husband or were at least romantically involved to have a child. In CA2, it was shown she was old, losing her memory and was married although her husband has remained unknown and not shown - however she did state that Steve had saved the man she would eventually marry. Due to the popularity of Steve/Bucky, the pairing of Steve/Bucky/Peggy is also popular.

Since Agent Carter was announced and knowledge that Howard Stark would be in the series, the pairing Peggy/Howard Stark took off. However once the series premiered, the femslash pairing of Peggy/Angie Martinelli took off as did the gen and het pairing of Peggy/Edwin Jarvis. By the end of the first season, Peggy/Jack Thompson, which was nearly nonexistent at the beginning, had grown, as well as the pairing of Peggy Carter/Daniel Sousa. Peggy/Angie has since become the second most popular pairing for Peggy in the MCU and is the dominant pairing for the show[6]. 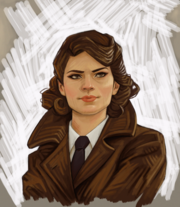 There she is. Miss America by Romanimp