The Babelian Council is a gen Star Trek: TOS anthology. There were to be six issues a year, but in the sixth issue, it was announced there'd be only three issues a year.

The zine was originally produced by two fans who lived in Portland, OR and Woodland, WA, as part of a "Star Trek support club." One of the original editors dropped out, and from then on, it was produced in Portland only.

A sister zine was The T-Tauri Report, a "supplement to the B.C., it will include info to keep the S.T. fan informed between issues."

About the Club and Zine

The Council's main purpose is to help keep up STAR TREK fandom, and to find other individuals who are interested in STAR TREK and who want to help return it to the air.

We are also largely involved in the letter-writing campaign and also a "publicity campaign." This means ads in other fan magazines, calling up businesses, putting up posters, etc. This fanzine is also part of our campaign. We are hoping it will be passed on to friends who will be interested enough to write to us or even another organization for information. Our zine will contain listings of other fanzines, organizations, people to contact, where to send for collector's items, etc.

The Babelian Council 1 is not dated but it has references that place it in 1972, possibly around August or September. While the pages are not numbered, there are about 8. 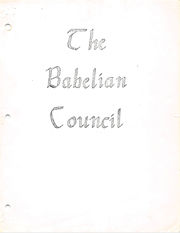 Most of the zine is handwritten.

The Babelian Council 2 is not dated, though it appears to be spring 1973. It contains 6 pages. 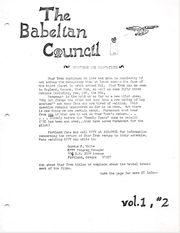 The Babelian Council 3 is not dated and contains 4 pages. 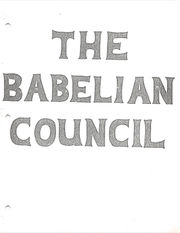 Recently a new term has come into use for identifying "Star Trek" fans. This term, "Trekkie," somehow doesn't seem to fit with the image of most of the "Star Trek" fans I know. It connotes a group of screaming teenyboppers who latch on to a fad, beat it death, and abandon it to move on to the next fad. I, for one, don't happen to like having this label attached to me. "Star Trek" is not a ephemeral for me or for the other "Star Trek" fans that I know. True, "Star Trek" fans stick to their show, even through all the frustration of cancellation by N.B.C. and abuse by local stations.

The use of this term (and I don't plan to use it again) worries me. If the image it projects impresses me (as well as other people I know) in this way, I wonder what it indicates to N.B.C. and Paramount. Thinking of the "Star Trek" campaign as a passing fad, the executives at Paramount and N.B.C. may be sitting tight waiting for it all to die down. All that was gained by writing logical, intelligent letters is lost by the use of this image. Certainly there are people moving in S.T. circles who have latched onto it as a fad. But the true fan can't let these people seem to be representative of our group as a whole. It is imperative to keep the quality of our image high.

It is my personal opinion that we (S.T. FANS) should refrain from the the use of this term. Although it is completely impossible to stop its use altogether, we can cut its use among ourselves and hopefully correct others (and stop its use in printed articles.)

The Babelian Council 4 is undated (published in 1973) and contains 4 pages. This is the first issue that officially states that Allan and Nass are now the editors. 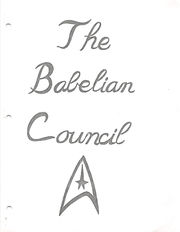 The Babelian Council 5 is not dated, but likely published in 1973. It contains 8 pages. 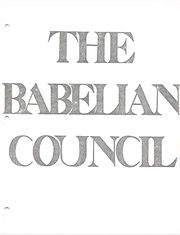 The Babelian Council 6 was published in spring 1974 and contains 6 pages.

The editors say they have to reduce the number of issues printed a year (now three a year, rather than six) due to lack of submissions, and how much work this zine is to do when combined with school work. 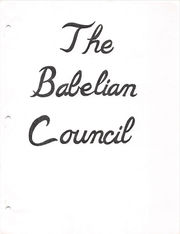