You may be looking for the Starman zine, Starlight.

Rim of Starlight 1 was published in August 1977, reprinted October 1978. It is 68 pages long and contains 9 stories and poems. This issue has the subtitle "Once Upon a Starship," and its cover is different than the other four later issues. 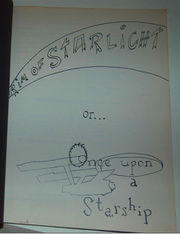 This is the cover, or title page, of issue #1 -- some issues may have a plain black piece of construction paper over this, perhaps to make this issue match the rest.
From the editorial:

Where did our parents go wrong? Or did they? Four clean-cut, middle-class, college-educated American women and look what we've done. We should be printing money instead of fanzines. Unfortunately, the Treasury Department objects to this sort of activity. So, we decided to turn our energies elsewhere. The tennis courts were filled, our golf clubs were bent and our polo ponies were lame so we decided to write a fanzine.

It was our combined opinion that poor artwork would take away from the quality of our 'zine. Therefore, we turned our attentions to presenting solid literary material. We began by contacting Asimov, Heinlein and Ellison. However, Asimov was out to lunch, Heinlein was at the shoemaker and Ellison was in the shower. Devastated at this information, we forged ahead and tried a new tactic. Instead of Nebula and Hugo winners, we called on near-Nebula and near-Hugo winners; needless to say, Clark, Fisher, Hausman, Hochman, Hope, Kevelson and Kevelson all rose to the occasion. They threw caution to the wind, dug themselves in for the duration, gritted their teeth, but said 'yea' anyway.

And so, with Roget on our left, Webster on our right and a song in our hearts (see Afterword) we present: RIM OF STARLIGHT (or) Once Upon a Starship

This is a first effort, I gather. It certainly looks it. It is mimeo on poor quality paper, so there's lots of showthrough that makes reading difficult. [1] There are annoying typos and spelling errors and errors in word use. The authors, or editors, or both, had better look up 'bemused.' However, that is the bad news. The good news is that this is very promising material. There are two major stories, both with solid enough premises, and both with some nice touches of characterization that serve notice that there's going to be some very fine Treklit coming out of Lake Ronkonkoma. Even better, there is a series of letters depicting life aboard the Enterprise from the point of view of two young SF officers highly reminiscent of -- and the best thing of its kind I have seen since -- the Dorothy-Myfanwy series. I have my SASE in for the next issue and I recommend this one. [2]

Rim of Starlight 2 was published in September 1978, reprinted in October 1978. It contains 74 pages. The cover is by Margaret A. Clark. 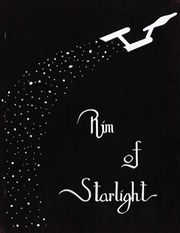 cover of issue #2
From the editorial:

One year later. Our folks are still doubting our sanity -- but quietly.

One year later. Issue two should have been out in February, but ...

... One year later, with Roget on our right, Webster on our left, and but a few limericks in our heart... we present RIM OF STARLIGHT II.

Rim of Starlight 3 was published in February 1979, second printing in July 1979. It is 86 pages long and contains 9 stories and poems. The cover is by Margaret A. Clark. 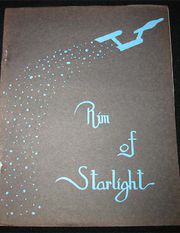 cover of issue #3
From the editorial:

It is really not that difficult to edit a fanzine, especially if you divide the work by four. Once you've found a printer and silk-screener (both at reasonable prices) and recruited writers, illustrators, and typists, the rest should be simple.

However, we never understood why...

... we ran 68 stencils through the Gestetner machine (Rim of Starlight 1, first printing) and it only at those pages with no errors. [a number of of other humorous follies described]...

Rim of Starlight 4 was published in 1979 and is 94 pages long. It contains 8 stories and poems. The cover is by Margaret A. Clark. 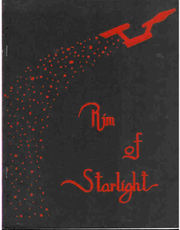 Rim of Starlight gets better each issue. Johanna Cantor leads off with an interesting story of a Vulcan summer vacation. Another story explores Jim Kirk's relationship with his nephew Peter after Deneva. This volume contains the conclusion of "But Everyone Hated Him" by Robyn N. Kevelson, in case you've been biting your nails to find out who done it. And of course, the famous "Interstellar Mail" -- however [how] did those four madcaps get turned loose in Starfleet, anyway? Recommended. [3]

Rim of Starlight 5 was published in 1980. It is 102 pages long and contains 15 stories and poems. Art by Margaret Clark, Nan Lewis, Chris Seelig, Wendell Shaw, and Terri Thorowgood. The cover is by Margaret A. Clark. 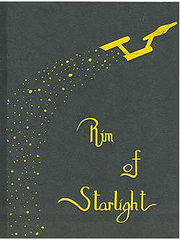 cover of issue #5
From the editorial:

We hate writing the Editors' Notes.

We don't mind typing three days straight with no sleep (at least, some of us don't}; we don't mind cutting 1000 sheets of black paper on a paper cutter with a bent blade; and we don't even mind driving forty-five minute: in three different directions to buy one sheet of press-on letter graphics. But, there's something about this one page that defies our creativity. We sit here and look at all the neatly typed originals, ready for the printer, and then someone always says, "But, we still haven't written the Editors' Notes!"

Our problem is that we are not conventional by nature. Everybody else uses the editor's notes to tell the reader what is in the 'zine. We say — Why bother? You can just as well open it for yourself and look. We can't use this page to give you little insights into the stories, the authors, a: especially not how a particular piece of fiction came to be written, Afte: all, this is only science fiction, not fantasy.

In keeping with our policy of nonconformity, we will now give you the highlights of what is not included in this issue: Kirk will not suffer a sub-dermal hematoma. A spy will not peel an apple. Spock will not enter pon farr. Irina will not leave Chekov at the Academy. Kirk will not be lost in Nazi Germany. The Federation will not celebrate its centennial. Jim will not be assaulted by his four-year-old son. The Federation will not beat Arcanis in a football game. A fandom gossip column will not appear. The story of Mary Sue's visit to Fantasy Island will not appear.

As a further gesture of non-conformity, we warn you now; Do not be surprised if this space is totally blank in Rim of Starlight VI.

This zine has been consistently good, and the current ish is no exception. Three of the stories are about the "current reality" --- that is, in ST:TMP's time or thereabouts. Margaret Clark's long form "Just One More Time" features Star Fleet's first woman captain who has to take her orders from Admiral Kirk, frequently finds him breathing down her neck to get back to a starship himself. How she deals with that problem while solving a space mystery is handled wittily and deftly by the promising new author, with hints of more like stories to come.

Johanna Cantor's short "Shakedown" follows on the heels of the Movie's closing credits as the crew tries the paces of the new Enterprise, and the Trio hesitantly settle into old/new relationships with allowances made for the inevitable changes time has made.

"There is No Paradise" by Rochelle Hausman deals with the aftermath in Kirk's subconscious of his experiences with Miramanee, and "Snack Time" is a riotous take-off of "Amok Time" by Louise Scharrenberg. "A Change of Heart" by Robin Kevelson gives Admiral Kirk a romance with McCoy's grown daughter, with an authentic-feeling background in terrorism in Africa, while Susan Hochman's long "Unveil Not the Wolf" relies too much on coincidence to make a satisfying mystery story, but her style is smooth. Several short pieces of humor complete the contents; in brief, something for everyone! [4]