Tales of the Free Amazons 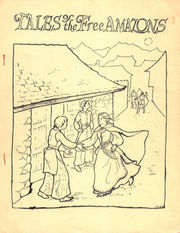 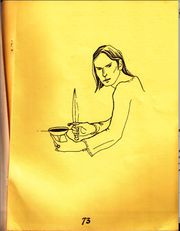 inside back cover, "Cup and Dagger" by Diana Paxson

Tales of the Free Amazons is a gen Darkover fiction and art anthology edited by Marion Zimmer Bradley and published by Thendara House.

Selected stories from both issues were reprinted in the DAW Books anthology Free Amazons of Darkover.

Long Time in the Planning

This zine was a long time in the planning, as per these January 1978 comments by Bradley:

With great regret, we had to reject a solicited article on the Free Amazons (and it was a good article, too, although highly critical of the Amazon lifestyle, a lifestyle which no one is more conscious than I, has its enormous flaws) because the writer saw fit to preface her remarks with a page of libellous [sic] and obscene commentary on the Thendara Council, personally. It seems that the lady had misunderstood my flippant retailing [retelling?] of the review in Publisher's Weekly, and our hilarity about the absurd word 'Psychogynecology' to mean we had spent that day cracking each other up with -- I paraphrase; the lady's remarks were unprintable -- vulgar jokes about the female reproductive organs. We requested the lady to delete those remarks, on the grounds that they were obscene, untrue, unsuitable for a family magazine and would give grave offense to may readers; her response was an unprintable tirade of abuse to the effect that she would not submit to censorship (she wondered if my loyal editor was a relative of Ms. Bryant -- he isn't) and that we could neither edit, delete, nor even censor with asterisks the vulgar and offensive remarks in question; there we were, with great regret, forced to refuse the article... And now let's find some more pleasant things to talk about. Anyway, you slice it, dirty jokes aren't funny -- not to anybody, and certainly not to most women, or to any halfway enlightened men. [1]

Tales of the Free Amazons is 73 pages and was published in February 1980.

Ever since the inception of Thendara House publications, we have received more stories on the subject of Free Amazons that on all other subjects put together. I am not sure why the Renunicates have aroused this kind of creative impulse in readers; perhaps it is a the desire... a sense of starvation for feminine achievements in fiction. In some feminist writings... the daydream is of a world where all the men have gone away and the accomplishments are entirely by women. I personally think this is a cop-out; in completely-female worlds, there is no one else to accomplish anything, so that women have it all to themselves. The Free Amazons of Darkover exist (as we all do) in a real world, where men are right there, competing, commenting, disapproving (or, sometimes, condescending to approve -- I would like to comment that if women are so oppressed, why is it that there are ten male-to-female transexuals for every women who would like to become a man?) The Free Amazons of Darkover may not be as 'free' as some avant-garde feminists would like to have them, but they are working in a real world against real opponents and real ambivalences about their own search for an honorable alternative to the world in which they live, and I think that is true of a lot of us....

Some women have actually taken Amazon names, and live by them in the "real world," not only at meetings of the Friends of Darkover. I am very ambivalent toward people who change their names and reject their own roots or ethnic backgrounds, but Jaida n'ha Sandra or Sharrie n'ha Verana is certainly no more annoying than Josie Anderdaughter or Helen Marychlld or Rainbow Winddaughter or Treelight Blossom. What's in a name anyway? Acute Nomenclature is hardly a fatal disease, and it's not limited to feminism; the hippie movement produced some ghastlies, and in 1910 or thereabout, Alelster Crowley named his daughter Noot Ma Ahathoor Isis Sappho Jezebel Lilith Crowley.

We have printed, and will continue to print, Free Amazon stories in Starstone; in fact, this could logically be called a Special Issue of Starstone, devoted to my sisters in Darkover fandom, and such brothers as can overcome their aversion to reading stories written for and about women.

The introduction to the excerpt from "Thendara House":

THENDARA HOUSE is a novel which deals with the life of Maqda Lorne (heroine of THE SHATTERED CHAIN) in the Guild-House of the Renunclates, called Free Amazons by the Terrans; and to some decree with that of Jaelle n'ha Melora in the Terran Zone during her freemate marriage to Peter Haldane. Because both Jacqueline Lichtenberg and I were busy with other projects, this novel has bogged down incompleted for years now, and it will probably never be finished in its present form. Years from now, I may cannibalize other sections of it for another novel, or I may rewrite it; this happened with the novel INSOLENCE, which became HERITAGE OF HASTUR. For the moment, I am presenting a brief episode. It has been succested to me that I might print the "Amazon rap sessions," as someone styled them, in a separate booklet for those who enjoy discussions of alien sexuality; they certainly slow down the story, but writing them was necessary to our thinking about the Amazon way of life as opposed to the traditional Darkovan way of thinking about women. That would be for another time. Meanwhile, here is an episode presenting Magda's first excursion outside Thendara Guild-House after her half-year of seclusion. 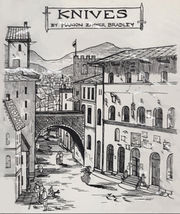 art by Hannah Shapero for "Knives" -- comments by the artist: "This is another one of my title pages for a story by Marion Zimmer Bradley. This part of Darkover looks like an Italian hill town, some of my favorite world architecture. Italian settings are fitting for the operatic melodrama of Bradley's writing. The story was about a young woman who runs away to become a member of the "Free Amazons," a feminist medieval guild and sisterhood. They are forbidden to carry swords and this is a gun-free civilization, so they carry long knives instead.... Original is black ink on illustration board, about 8" x 10", January 1983." - pyracanthasketch

More Tales of the Free Amazons has an unknown publication date, likely 1983 as per a comment on the art. It includes "Knives", a short story by MZB. This short story was later professionally published by DAW Books in 1985 in "Free Amazons of Darkover." It was reprinted again in 1993's "Marion Zimmer Bradley's Darkover."

The main plot of "Knives" -- Bradley’s “Knives” confronts the issues of child molestation and parental betrayal. When the young girl, Marna, is faced with molestation by her stepfather, she is given the strength to get away from him. This is a prophetic summary, see Allegations: MZB Sexually and Physically Abused Her Children.

Bradley said that it was her attempt to write a Free Amazon story without reverting to a standard plot:

Dyan of HERITAGE has turned out to be the most popular single character for amateur writers—as I've said before, we receive more Free Amazon stories than all other stories put together (and most of them have the same plot at that, MZB, who has to read them all, says)—but MZB recently quoted the following from a letter she wrote to Don Wollheim:

Only one plot comes even near, in popularity, to the Standard Free Amazon Plot, which Diana and I have begun to call Subject A; Free Amazon meets a Man She Can Trust, and thus is enabled to give up a little of her cherished freedom. Second most popular as a theme for amateur stories is "How did Dyan Ardais manage to father a first son?" I got five of them. One was unprintable. All were gloomy and tragic.

However, we are doing two books for THENDARA HOUSE which will interest those people who keep returning to these themes. One is MORE TALES OF THE FREE AMAZONS, for which we have some excellent artwork (we get a lot of Free Amazon artwork, too) and contains the MZB story KNIVES, which MZB says "it is my attempt to write a Free Amazon story NOT using subject A." [2]

About "Knives"' origins: It was MZB's anonymous entry to her own short story contest in Starstone:

...another story was, not precisely disqualified (since nowhere in the rules did it say that a judge could not enter) but my own desire for feedback; I slipped in a short story of my own in the line-up, to see what my fellow judges would say. I wrote it for three reasons; one, to see if I could tell a complete self-consistent story in 20 pages; two, because so many of the Free Amazon stories I read had the same plot and I wanted to see what kind of story I would write ... (the same plot runs about like this -- Free Amazon finds a man she can really trust and realizes its okay to give up some of her cherished freedom --later I received eight or nine of these things for the anthology 'Sword of Chaos' and I did not buy a single one!) [My] story 'Knives' received rather disappointing feedback from the four judges. Diana Paxon and Katherine Kurtz giving it 22 and 28 points out of 30, commented only 'very nice story' and 'well done.' Reason three for this submission was to see how people who supposedly knew my writing very well would react to a story without my name on it. Jacqueline Lichtenberg wrote a fairly long helpful critique... She too gave me a 28 points out of thirty. The fourth judge, Walter Breen, did not suspect I had written it -- I used a different typeface and wrote it while he was away in New York -- but wrote, "I can't fault this one -- I don't even think MZB could have handled it better.' I, of course, did not rate the story at all, but even with four judges ratings it would have received an honorable mention. (I don't think it was good enough for the the anthology; I'll probably print it in More Tales of the Free Amazons... All of the judges were annoyed when they found out what I had done, and I don't blame them... [3]