The DAW Darkover Anthologies were professionally published, for-profit fiction anthologies with content by written by fans of Darkover, a series of books created by Marion Zimmer Bradley. Bradley herself edited the series.

There are one hundred ninety-eight published Darkover short stories in these anthologies, written by ninety-five different writers. Bradley wrote twenty-two of these stories.

Many of the stories were written by "regular fans" who'd answered the submission requests in Darkover Newsletter or other places, some stories were chosen by Bradley via contests sponsored by her zine Starstone, and some fiction was by "super fans," fans who had elevated status through their involvement with Friends of Darkover and other forms of Bradley's personal mentoring. Some of these "super fans" are Diana L. Paxson, Elisabeth Waters, Jacqueline Lichtenberg , Mercedes Lackey, Jean Lorrah, Patricia Mathews, Cynthia McQuillin, and Adrienne Martine-Barnes.

One of these fans, Deborah Wheeler, went on to become Bradley's successor and writer of her Darkover continuations.

DAW Books played a large role in the Darkover fandom.

After Darkover became popular both from MZB's published books and among fanwriters, MZB began to accept submissions from fan and professional authors for a series of Darkover anthologies which she edited and were published by DAW, beginning with The Keeper's Price (1980). This gave some fan fiction writers an opportunity to be professionally published.

Introduction to One Anthology

From "Renunciates of Darkover": "These volumes of stories written by Marion Zimmer Bradley herself, and various members of the society called The Friends of Darkover, strive to "fill in the blanks" of the Darkover history, and elaborate on the eras, tales and characters which have captured their imaginations."

Marion Zimmer Bradley kept fans abreast of her activities, solicited fiction, and published guidelines for submission to the DAW Anthologies through announcements and comments in Darkover Newsletter.

The anthologies were a veritable laundry list of Darkover (and Star Trek) Big Name Fans, and much of the content as well as the authors, in early issues were pulled from issues of the zine Starstone and from other fan sources. Another source of material for the Daw Darkover Anthologies were winners of the Darkover Short Story Contests. Fans who's submitted their fiction to this contest found themselves automatically on the radar as possible DAW material. From the first issue of Starstone in 1978:

Would you like to have your Darkover fiction published in DAW BOOKS? 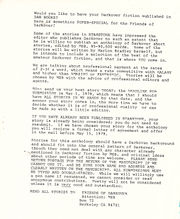 Here is something SUPER-SPECIAL for the Friends of Darkover.

Some of the stories in STARSTONE have impressed the editor who publishes Darkover to such an extent that he is willing to publish an anthology of Darkover short stories, edited by MZB, 85-90,000 words. Some of the stories will be written by Marion Bradley herself, but he intends to include a selection of the best of the amateur Darkover fiction, and that is where YOU come in.

We are talking about professional payment at the rates of 2-3£ a word, which means a rate competitive with GALAXY and higher than AMAZING or FANTASTIC. Stories will be chosen by MZB with the advice of professional editors and agents.

SO— send us your best story TODAY; the DEADLINE FOR SUBMISSION is May 1, 1979, which means that I should have ALL STORIES IN MY HANDS by that date, and the sooner your story comes in, the more time we have to decide whether it is of professional quality or can be made so with a little editing.

IF YOU HAVE ALREADY BEEN PUBLISHED IN STARSTONE, your story is already being considered; you do not need to resubmit. If we have chosen your story for the anthology you will recieve [sic] a formal letter of agreement and offer in the mail before May 15, 1979.

Stories for this anthology should have a Darkovan background and should fit into the general pattern of Darkover, though they need not deal with any character already mentioned in Darkover fiction by MZB, and original ideas about other periods of time are welcome. PLEASE SEND RETURN POSTAGE FOR THE RETURN OF THE MANUSCRIPT IF WE CANNOT USE IT, and BE SURE YOUR NAME AND ADDRESS ARE CLEARLY WRITTEN ON THE MANUSCRIPT. ALL SUBMISSIONS MUST BE TYPED AND DOUBLE-SPACED. While we will willingly use a pen name if requested, we cannot consider or read anonymous contributions. Poetry will not be considered unless it is very good and outstanding.

Fans were paid between $10 and $20 for their stories if they were chosen contest winners in the 1979 Darkover Short Story Contests. A 1990 list of guidelines published in Darkover Newsletter #49 said fans would be paid: "2-6 cents a word as an advance against royalties" for the DAW Darkover Anthologies.

Bradley's desire to start, and continue, the DAW anthologies was based on many things (ego, visibility, fun, desire to assist female writers), and money was one of them.

Did Bradley Consider Them "True Darkover"

From the "Domains of Darkover":

On idea that has somehow found lodgment in the public mind is that each story I select for the anthology is somehow official; that my approval of a story, or wanting to share it with other readers somehow gives it legitimacy in the Darkovan chronology. If it isn't apparent from internal evidence, let me state now that apart from the short stories I have written myself, no; the anthology stories are not official, or at least all of them are not. A few of them fall in so readily with my own feelings about Darkover that they might really-really in the context of the Darkovan universe-have "happened": that is, if I thought of it, I might have written them myself. But of these, there are only a sparse handful: Pat Floss' "The Other Side of the Mirror" seemed so near to what I has envisioned without bothering to write it down that now I think what happened between HERITAGE and SWORD OF ALDONES or, if you prefer, SHARRA'S EXILE, was probably what Pat envisioned. The stories written by Diana Paxson about early days on Darkover-say between LANDFALL and the Ages of Chaos-are very near to officialdom because Diana and I are dear friends, and her mind works much as mine does. The same can be said of the stories by Elisabeth Waters, and a few other stories.

The DAW Darkover anthologies ceased in the mid-1990s after the Marion Zimmer Bradley Fanfiction Controversy, something that was upsetting to many fans who'd enjoyed the visibility, status, and money of being published professionally. This included Bradley herself.

[Alice]: Patrick, I posted before seeing your post. As an example of "dilution" I'd use Marion Zimmer Bradley's Darkover series. She authorized the publication of short stories by others. As a die-hard Darkover fan, I purchased them. They were, in my opinion, not as good as the original, and usually repetitive of her tropes. The series lost some luster because of it. The additional volumes that have been published after her death have also diluted the story by adding to her world without her specific style and storytelling talent.

I assume that the additional volumes have not hurt sales--I don't think fanfic does. To the contrary, it probably is a great vehicle for advertizing the original. But it doesn't help the original story.

It's a value assessment, not an assessment of volume. [1]