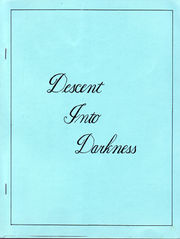 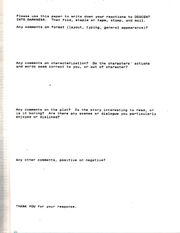 response form at the back of the zine, the author's address is printed on the other side for ease of mailing

Descent into Darkness is a gen Star Trek: TOS 66-page novel by Joan Marie Verba. It contains no art.

This zine is a sequel to Genesis Aftermath.

The author included a reader response form at the back of her zine, a unique idea.

An alternate universe Star Trek novel. In this setting, Kirk and Co. rescued Spock from Genesis without breaking regulations or destroying the Enterprise. Now Admiral Kirk faces a new challenge: Federation citizens are disappearing from a remote Federation colony only to reappear days, weeks, or months later, dead. When an old friend of Kirk dies, the admiral investigates and disappears as well. Can Kirk survive where murder is a daily event, no place is safe, and no one has yet come out alive [1]

This is a sequel to Joan's earlier novel, The Genesis Aftermath, which waa a rewrite of ST III In which the Enterprise was not destroyed. In this universe, the events of ST IV have never happened. It stands on its own, being set in the Genesis Aftsrmath universe without actually following on from it. The colony planet of Nargathrond has been settled for some eighteen years; the native Lir are peaceable but - in the words of the governor - not very smart. Kirk goes there for the funeral of Frank Harper, an old friend, and quickly learns that something about Harper's death is suspicious, although the governor doesn't want attention drawn to it. However, a number of ex-Starfleet officers who now live there tell him that over those eighteen years there have been several disappearances, and some of the victims have reappeared weeks, months or even years later, some of them - as in Harper's case - many miles from where they were last seen, all dead.

Kirk goes to where Harper disappeared, finds himself caught in a transporter effect, and rematorialises underground in a complex where there are several native Lir and the missing colonists, and the Lir are all trying - trying very hard - to kill everyone they see. Kirk does manage to get a message to the Enterprise, and Spock, Scott, Sulu, Uhura, Saavlk and two others, Captain Smotana and Lt. Bonnett of the Phoenix, beam down into the complex. They are then, however, as stuck there as Kirk and the other missing colonists. They realise that the 'normal' Lir culture must be living even deeper underground; those on the surface are the harmless mentally handicapped members of the race, while those in the complex are the homicidally insane, put where they can harm nobody except themselves. The colonists have been picked up by accident; but the only way they can escape is by contacting the rulers of the 'normal' Lir.

This story is well thought out and well developed. Joan's own characters are real people - and Captain Adele Smetana does not come over ao our old friend Mary Sue! It's well worth getting. [2]