BlooMN'Con 1 was held July 2–5, 1982 Ruth Berman gave a slideshow. There was a trivia contest, a banquet, costume party, and art show, a dealer's room, film room, panels, and an art auction. 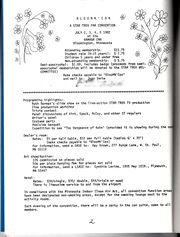 flyer printed in Spin Dizzie for the first con

It was an "...all-Star Trek, fanzine-oriented convention, returning to the tradition of the Se*KWesterCons. The committee consisted of Kay Brown, Marilyn Johansen, Cynthia Levine, Carol Christensen (Reeg), and I. We expected to get 500 attendees easily. When we found only a handful of registrants by February, we discussed canceling the convention, but ended up agreeing to hold it anyhow. Thus, BlooMN'Con I was held on July 2–5, 1982, at the Ramada Inn, Bloomington. The hotel no longer exists, and neither does the large drive-in theater that was next door at the time—and which was showing The Wrath of Khan during the convention. We could see the movie from the window of the hospitality suite. Our final attendance was 70, but everyone reported having a delightful time. In addition to the usual panel discussions and art show, we had a dealer's room. In order to bring more fanzines, we started the tradition of agenting fanzines at the convention for other editors. Conventions in future years picked up on this practice, and it is now fairly common. We also had popular fanzine writers in attendance read from their own work, which was well-received but, unlike agenting fanzines, was not imitated. 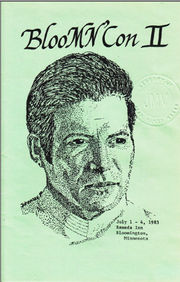 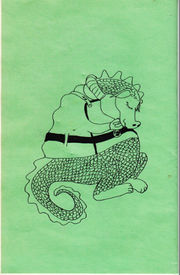 convention program book for the second con, back cover

BlooMN'Con 2 was held July 1–4, 1983. There was filksinging, two con skits, several slideshows, a banquet, a costume party, and art show, a dealer's room, film room, panels, and an art auction.

Again, we had about 70 members. Again, most reported having a good time. The theme still centered on Star Trek fanzines; in addition, some who attended initiated their own 'media' events. The Dark Shadows fans took over the smoking lounge, and a non-Trek party ran at the same time as the hospitality suite. But the membership numbers were not growing; our committee of five chose not to hold another one.