Transition is a het Star Trek: TOS fanzine. It is a 156-page long Spock/OFC novel by Lois Welling. Illustrated by Beverly Zuk. Poem by Sharon Decker. This story follows Spock's life as he and his family (including his Terran-born wife, Susan) are rescued from the alien breeding farm where they have been held captive. 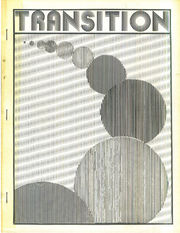 From Universal Translator #23: "'Transition' begins where 'The Displaced' leaves off. Rescued by Spock's efforts, the 'family' must now begin building a new life on Vulcan. But the parameters of the old relationship has changed, and Susan's readjustment is complicated by a trip back in time."

This zine is a total delight from its front cover (a gorgeous graphic which illustrates the title perfectly) to the concluding poem. The print is unreduced, clear and easily readable, and the layout is superb; this is an obvious labor of love. Typos are practically non-existent, and the artwork by Beverly Zuk is well done and well placed within the layout of the zine. The story itself is a sequel to The Displaced, but now Spock and his wife, Susan, have escaped the breeding/prison planet where they met and began their family and now Susan, a 20th century human, is faced with meeting Spock's parents and learning to live on Vulcan. The insights which are provided into their relationship are honest and not all the 'happily ever after' type, which lends realism to the story. Susan's self-doubts and personal thoughts give her a quality of realness which I have seldom found in fan fiction before. And, as if Susan didn't have enough to consider in her new life, as a result of it, she is given another chance to go back to her own time, her own home, for just a short visit to help a Federation team doing research on that period in history. She hadn't really come to grips with living in the 23rd century yet, so how will she react to a chance to return to her own time? This is perhaps the most interesting part of the story. And on top of all that, the reader is given the chance to see how Kirk, Spock, and McCoy would react to various 20th century events such as a family Fourth of July get-together. I could say much more about this zine, but I don't want to spoil the remainder of the plot for potential readers, and I do want to encourage any fan who enjoys a really good, interesting, and well-thought-out fan novella to get your hands on a copy of this zine. I think you'll be as totally delighted with it as I was! [1]

I was a one quarter of the way through this novel before I realized it was a sequel, it stands that well on its own… ‘Transition’ is basically the further adventures of Sue (whose first name is definitely not Mary) once she reaches Vulcan. The novel focuses on her difficulties adapting to 23rd-century society in general and Vulcan society in particular, but though this is essentially a relationship story, it’s definitely not your run-of-the-mill Soap Opera. Social and personal conflict are presented in tough-minded, direct, gritty terms – much like the personality of the heroine herself – and no easy solutions are offered. In fact, when Sue is required to go back to her former life in 20th-century Earth in order to retrieve some valuable documents, and the temporal shock wipes out her memory of the years since she was kidnapped from Earth, there is real conflict over the question of whether or not it would be better to leave Sue where she is, in the life she was born for. This is not to say the novel doesn’t have flaws: the opening stream-of-consciousness episode is bewildering and unconnected until one gets well into the first chapter, and the last episode in the admittedly-episodic plot was unnecessary and should have been reserved for the opening of the next sequel. Still these flaws are more than forgivable in the smooth and compelling quality of the rest of the writing. Characterizations are very good; even walk-on characters are three-dimensional and solid. The scenes where Spock, viewed as a stranger, is obliged to court Sue all over again and win her love on Human terms are alone worth the cost of the zine. Characterization and expert use of language place this novel head and shoulders above every ST romance I’ve ever read, and well above most professional romance novels as well. As for the superb Zuk illos, all I can say is there weren’t enough of them. Each piece is a fully-realized scene, not just a straight-from-the-stills portrait, though I can identify the particular well-known photographs used as models. The ‘playful’ love scene in the desert has a fierce, kinetic quality that makes it questionable whether the lovers are wrestling in love or serious combat, with faithfully mirrors the tension in the written scene… Minor details: the printing quality is crisp and clean, typos are minimal, the binding is heavy staples that keep a good firm grip even through 155 pages and two thick covers. My only possible quibble would be that the cover design, while artful and suggestive, is only that – a design – rather than a full illustration that the novel deserves. It’s beautiful, though. In fact, I can’t find a page in the zine that isn’t a feast for the eyes. Altogether, ‘Transition’ isn’t an action-story, but it’s a damn good novel anyway. Buy it. [2]

It begins with a recap of events from the first novel. Spock recalls his years of captivity on Towan, the family he formed with the three women and his ultimate escape. Most of this story is about Susan. After having survived her captivity on Towan she must now make the adjustments to life as a free individual living in the 23rd century. She has faced the first very high (and scary) hurdle of meeting Spock's parents and facing their reaction to her relationship with Spock. Now It is with a mixture of happiness and nervousness that she faces the prospect of life on Vulcan with her new family. She is afraid that she will be viewed as a "relic" from the past and worries about how she will fit in on Vulcan. She is also a source of great interest to the experts (including McCoy) who try to figure out how she was able to survive the "time-displacement" when so many others could not make the adjustment and perished. In this story, the author also makes very clever use of The Guardian of Forever. Valuable scientific records were destroyed in the 20th century and Kirk, Spock and McCoy venture back through the Guardian to retrieve them. Susan accompanies them because of her unique position as friend of the scientist whose work Is destroyed. She will provide a cover story for the Big Three on their mission. It's an unusual twist on the time travel theme. At first, it was Susan who had to learn to adapt to the 23rd century - a time where Spock is "at home." Now he must view Susan In her own time living her old life. Will Susan make the transition successfully and be able to close the door on her former life when they return to the future? Or will she choose to stay in her "own" time and abandon Spock and their life together? All In all, it is an original story. The dialog and phrasing are sometimes a bit repetitive and clumsy, but it's a great effort for an amateur story. The layout and artwork are similar to the first book. [3]

You might call it a ST gothic, or a ST romance, or even a Mary Sue. But whatever you call it, you will want to read it. TRANSITION is the story of Susan Benelli, a 20th century woman whose husband and children were killed in an automobile accident. Two years after this event, she is on a plane to Bermuda when the whole plane is kidnapped through time and space by a doctor doing illegal experiments with interspecies breeding on the planet Towan. She is lucky enough to be one of Spock's three assigned mates. Five years and a number of children later, Spock escapes and leads the Federation back to free the survivors.

The novel begins at this point, at the funeral of Susan's and Spock1s fourth child who died shortly after birth. Susan and Spock have to cope with this loss and take their remaining three children and a couple of adopted ones off to Vulcan where they must build a marriage for themselves. But it's not going to be easy! Susan has to cope with culture shock and future shock and half a dozen other nameless shocks. And in the midst of building a new life for herself and her family, she gets dragged into a mission through the Guardian with Kirk, McCoy, and Spock. It seems that Susan's 20th Century husband had been working for a brilliant researcher whose work was destroyed in the Eugenic Wars, and the historians want to look at this work. Her contacts and knowledge of the time are essential to the success of the mission. There's only one little problem: as soon as she's in her own 20th Century backyard, Susan can't remember Spock, the future, and the mission. Who said you can't go home again? TRANSITION is Susan's story; and what a story it is. Ms Welling does a wonderful job of bringing Susan to life. By the time you finish the novel, you will know Susan and respect her for what she is—a survivor. In addition, this is the story of a marriage in transition. Susan and Spock are the original odd couple forced upon each other by bizarre circumstances and encumbered by the presence of two other females and a menagerie of children. A more inauspicious beginning for a marriage cannot be imagined—and freedom only complicates matters- Susan and Spock have to reevaluate their relationship and make concessions and adjustments, and Ms Welling manages to make

this all seem real. This is no imaginary dream marriage, but a well-worn one with seams and patches and thin spots like Grandma's quilt, and all the more dear for it. And then there's the trip back in time which brings up all the ghosts of the past, and yet lets Spock get to know Susan on her own turf. The time on Vulcan is a bit too sweet for my taste. The Vulcans seem a bit more accepting and accommodating than the series led me to believe they are. Spock also seems a bit too human, but five years on Towan may have changed him. However, the bittersweet trip to the past is a real winner. [4]

This volume continued Spock & Susan's story after their return form Towan. It is a gentler story as the urgency of existence is no longer required. Instead, we have a story of adjustment. From the introduction - written from Spock's perspective - to the return to Earth, we sense the growing of both in understanding and love.

The only flaw is that Susan's position - what she will work at - is not resolved. This is a minor complaint of herself also, however, with time I think she will settle. As you can see, I like this story because I and many others also feel that Spock is capable of great love and compassion. This commitment to his fellow officers and friendships with Jim and McCoy bear this out. Lois has given us a good insight into this aspect, even when they encounter Susan's in-laws, his insight helps her overcome the fears she has of their dominance.

Without raving too much, I recommend this for all those who like good writing and especially Spock. [5]