Starsky & Hutch Adzine & Newsletter was published in from mid-1992 to at least February 1995. It was likely published by Jean Holmes.

The newsletter included information and ads for gen and slash fanworks.

It was published six times a year. 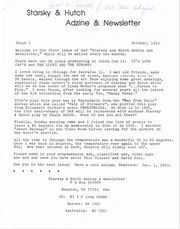 "Please send in any proposed zine ads, current zine ads, classified ads, music video ads etc. and any news you may have about David Soul or Paul Glasser [sic] for inclusion in our next issue. Thanks!"

It contains a short con report from Zebra Con 11, which had occurred two years ago, a natural consequence of that con's every-other-year staging, and the elongated attention spans of fans who depended on print newsletters to arrive in their mailbox.

Welcome to the first Issue of Our "Starsky and Hutch Adzlne and Newsletter," which will be mailed every two months.

There were two SH zlnes premiering at Zebra Con 11: IT'S LOVE CAP'N and THE LUCKY AND THE STRONG

I loved being In Chicago for ZebraCon 11. I met old friends, made some new ones, ooufeht the new SH zlnes, watcued videos, went to SH panels, walked through the Art Show enjoying some great drawings, especially Suzan Lovett's color portrait of Starsky and Hutch which will be on the cover of Linda McGee's proposed zine "...Turned to Fire." I even found, after looking for several years all the issues of the S/H letterzine from the early 80s, "Hanky Panky."

ZCon's play this year was by Paula Smith from the "Man from Uncle" series which she called "Pair of Strokers"; she plotted this play from Elizabeth Ulrich's novel PERESTROIKA. At ZCon 12 in 1995, the 20th anniversary of S&H will be celebrated with another Starsky & Hutch play by Paula Smith. Hope to see you all therel

Finally, Sunday morning came and I joined the line of people to leave a $5 deposit for my membership in ZCon 12 in 1995- I watched "Sweet Revenge" in the Video Room before leaving for the airport on the hotel's shuttle. 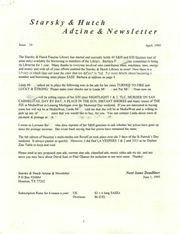 The Starsky & Hutch Fanzine Library has started and currently holds 40 S&H and S/H fanzines (out of print only) available for borrowing to members of the Library. [Barbara F] has committed to being its Librarian for 1 year. Many thanks to everyone involved who contributed zines, machines, time, energy and money and with all of your efforts enabled the Starsky & Hutch Library to exist! Now there is a Library in which fans can read the zines that are difficult to find. For more details about becoming a member and borrowing zines please SASE Barbara at address on page 4. 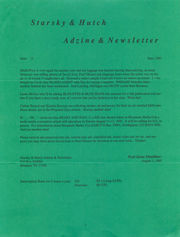 MediaWest is over again for another year and my luggage was heavier leaving than arriving, as usual. Someone was selling photos of David Soul, Paul Glasser [sic] and clippings from when the series was on the air so of course I bought them all. Enjoyed meeting people I had only known as names on letters. I even bought an Uncle zine BLOOD AGENT with Ilya [sic] becoming a vampire. WHOAH! Intruder Alert - another fandom has been mentioned. And Lansing, Michigan was MUCH cooler than Houston.

The computer makes its debut in this newsletter: A fan, Cathee Kancel, writes about the zine that would later be titled Above and Beyond: 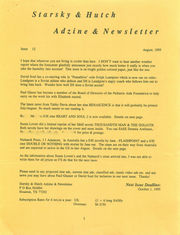 front page of issue #12
The zines advertised in this adzine and in Frienz would all become sold by their own publishers and/or agents in later years. But in 1995, the Internet was unfamiliar, and many, many fans feared wider exposure regarding their fanworks and activities. An example of this fear is in the editor's statement:

About posting any Fanzine info or their Editors on the Net.

Please DON'T! I do NOT want any info about this OR from this Adzine or FRIENZ posted on the Net or the BBSs. I know that many other Editors also DO NOT want any info posted about their publications on the Net. You do NOT know who is reading any posting on the Net. Networks pay their employees to scan the Net to see ANYTHING that is being written about their old or new shows. Please ask any fanzine Editor first whether they object to info about their publication being posted ANYWHERE on the Net or the BBSs. Thank you. 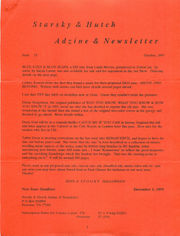 front page of issue #13
From the editor:

Tabby Davis is awaiting corrections on the last story into RENASCENCE, and hopes to have the zine out before years end. She wrote that the zine "is best described as a collection of stones recalling many aspect of the series some by writers long familiar in SH fandom, some introducing new talents, some S/H some not.... I want 'Renascence' to reflect the good memories and the enriching friendships which this fandom has brought. That was the starting-point in embarking on it." It will be around 200 pages. 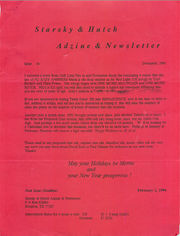 It contains the usual postings and ads. 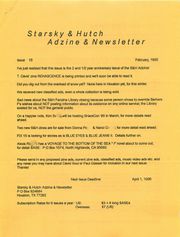 front page of issue #15, last names redacted, note the next submission date discrepancy; this issue was actually published in February 1996 (not 1995)

from issue #15, announcement about the S&H Lending Library
This issue contains the usual zine ads, but also this announcement:

There is also a warning included with an ad:

SONGTAPE FANS: All music vids with piano logo titles are done by 'JAM'. Nth gen copies are passed around with no idea who did them. Please do not copy! This is bootlegging my work.If interested in copies, SASE ONLY (no $$): JAM aka [info redacted]. I tend to be slow, so send no $$ until AFTER you receive your tapes.