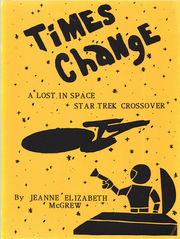 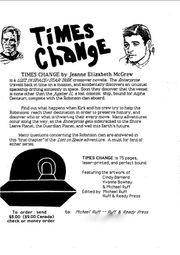 From an ad in The New Monthly: "A crossover novel in which the Jupiter II is rescued by the Enterprise and is caught in the Trek adventures, until Kirk and company return the Robinson clan to Alpha Centauri. Certain experiences in both crews' pasts play havoc in this 'Lost in Space' romp. Find out what happens to all your favorite characters in this final chapter."

Back in the sixties, when Star Trek was on network television, fans of the show were automatically 'expected' to hate Lost in Space. I was never quite certain why this was; it has always seemed to me that science fiction fans should stand together in great loyalty and mutual defense against a world that is often hostile toward all of us. But I still see signs of the divisive and counter-productive trend even now: articles supportive of the five new Star Trek movies frequently put down the Star Wars movie series as somehow inferior. The target has changed but not the pattern. So I suppose that I committed an unforgivable sin in the sixties: I loved both Star Trek and Lost in Space. I still do. I even love Star Wars. Presumably I will not be lynched for these admissions. And, as Mr. Spock would say, "I am constrained to point out" that Lost in Space still retains its popularity, also; witness the multitude of TV stations across the country that still present that show's reruns. Many other SF programs from approximately that period: Land of the Giants, Voyage to the Bottom of the Sea, The Invaders, UFO, Battlestar Galactica, Space: 1999, etc., have not fared so well. (Yes, Space: 1999 fans, your show still occasionally enjoys reruns, but not to the degree Star Trek and Lost in Space have experienced.) Imagine my joy, in the years since the sixties, in discovering that I am by no means the only closet "Trekker-Spacer" around. There are a lot of us! I made this discovery slowly, carefully. At first, I admitted my shameful status only to close friends, who shocked me in turn with their own confessions. From this encouragement, I grew bolder, admitting my disgrace to carefully selected individuals encountered at Star Trek conventions. Again, I was overwhelmed with the thrill of camaraderie. The number of people I have met who share my peculiarity have at last convinced me that I am not peculiar!

I no longer have to feel sympathy for those caught-in-the-middle guest stars who appeared in both series: Michael J. Pollard, Michael Ansara, Ted Cassidy, Malachi Throne, Abraham Sofaer, Arthur Batanides, and Torin Thatcher. I no longer need to snicker that a Star Trek writer, S. Bar-David, wrote for Lost in Space under the name of Shimon Wincelberg. I can stop giggling over the fact that Star Trek's brilliant music writer, Alexander Courage, wrote music for selected episodes of Lost in Space, several bars of which sounded like slightly rearranged Star Trek background music.

All of this has given me the courage to write this book. Not only is it not difficult to make Star Trek and Lost in Space 'fit' together without any mutual contradiction, they practically fall into place effortlessly, with no prodding whatsoever on my part, as you'll see.

Lost in Space was probably the most misunderstood and underappreciated science fiction television series ever created. I would now like to let my fellow Star Trek fans in on a bit of Lost in Space's history. Like Star Trek, it ran for three seasons. But it went on the air one year earlier that Star Trek. This difference is crucial--for it was billed as the first adult science fiction television series. (Sorry, Star Trek) it was. And its first season was superb. I recommend any of its first season episodes (the black-and- white ones) unconditionally. And don't fuss about those episodes being in black-and-white, please; so are parts of The Cage. Does that diminish your love for The Cage? I should hope not.

Some of those old Lost in Space black-and-white episodes are so delightful that I defy even color to improve them; you can't improve on perfection. Then came the day that is so holy to all Star Trek devotees: the beginning of Star Trek. Unfortunately, however, that miraculous day spelled doom for Lost in Space. It should not have, but it did. Why? Because CBS, in its infinitely questionable 'wisdom,' decided that, heaven forbid, there could not be two adult science fiction television series; there would never be enough intelligent audience for two of them. It did not occur to CBS, apparently, that the same audience could love both. I suppose this should not surprise me. As Mr. Gene Roddenberry has often said, NBC doubted that there were enough intelligent people out there to support even one: Star Trek. So, CBS ordered Lost in Space to drastically alter its format and become a kiddie show. What a tragedy! And from what I have read, the cast of the show felt the same way about the changes that I do. Did I stop watching Lost in Space at this point? Did my friends? No. By that time, we were hooked. Hooked on the magnificent cast—no matter how abysmal some of the story-lines became. You see, we knew what Lost in Space could be. And I'm not saying that there were never again excellent episodes. In the second season, there was an episode that, under a somewhat silly surface, further inspection revealed to be a surprisingly inspiring allegory: The Questing Beast. There were also episodes that offered an offbeat but delightful sense of humor, such as Rocket to Earth, The Space Vikings, The Android Machine, The Revolt of the Androids, and The Galaxy Gift. And there were those that were just plain good fun, like Wild Adventure. In the third season there was an absolute gem entitled Visit to a Hostile Planet, which seemed to be a cross between Star Trek's Tomorrow Is Yesterday and Assignment: Earth. In fact, you'll notice I make strong references to it in this book. Actually, I refer to many episodes of both series. In the case of Lost in Space, I make references only to the very best. So now, fellow Star Trek fans, I challenge you!

Invoke the Vulcan IDIC! Seek Infinite Diversity in Infinite Combinations. Cease attacking Lost In Space until you have done the following: (1) until you have seen these episodes: The Reluctant Stowaway, The Derelict, Island In the Sky, There Were Giants, In the Earth, The Hungry Sea, My Friend, Mr. Nobody, The Sky Is Falling, Return From Outer Space, The Magic Mirror, All That Glitters, The Lost Civilization, Follow the Leader, and Visit to a Hostile Planet; and (2) until you have read this book.

My purpose, then, is threefold. I wish to extend the hand of friendship to (I'm sure by now) quite paranoid Lost In Space fans, who must think Star Trek fans to be snobs. I hope to open the eyes of Star Trek fans who have not also managed to 'apprivoiser' Lost In Space. (English has no verb so charmingly appropriate as that French one). And most of all, I want to reassure my fellow closet "Trekker-Spacers" that you are not alone!

If all else fails, at the very least, my book will be unique.

Best part is actually the author's impassioned plea for the quality of the first season of Lost in Space, which made me curious to see them and find out if I would agree. The story is entertaining but not spectacular, and pretty gushy. Enterprise is time-travelling to Earth to record events of the Eugenics War era, and rescues the party of the Jupiter II. Kirk tries to take them to their proper arrival date on Alpha Centauri, but is thwarted with every try - first through solar breakaway moves, then at the Guardian. Meanwhile, the Robinson party relive some of their episodes, through the Shore Leave planet and the Guardian. Will and Penny each rescue future love interests, and much of the story revolves around eventual amicable resolution of the craven Smith's relationship with John and Don, who actually do beat him up after threatening for so long. Finally, going beyond the Barrier, they find the source of the interference - a type of god made of neutrinos, who keeps worlds and times in place, and now judges that the Enterprise must be destroyed. It is saved by Penny, who recognizes one voice as her "Mister Nobody" and makes an emotional plea. [1]