McCoy's T.O.Y. is a gen Star Trek: TOS McCoy-centric anthology of fiction and art with three issues. They had between 50 and 100 pages.

Regarding the title: "T.O.Y." stands for "Talents of Yours." The title was chosen by DeForest Kelley himself.

The material for the proposed zine that never got off the ground, "Beads and Rattles," was folded into "McCoy's T.O.Y.". 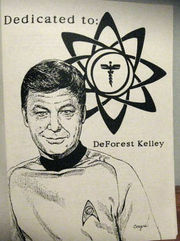 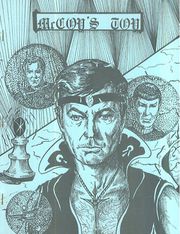 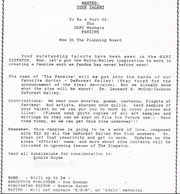 a flyer printed in The DeForest Dispatch #18 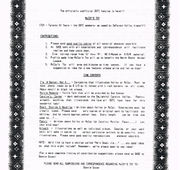 a flyer printed in The DeForest Dispatch #19

Comments by the Editor: Issue 1

Printed in The DeForest Dispatch #22:

Just wanted to include a word about our officially unofficial fanzine - McCoy's T.O.Y.... For our first issue, it was well received, and already there's a loud clamoring for issue number two. BUT, $$$ = publishing! For those of you that think zines print themselves, here's a real shocker....bare bones (no pun intended), it takes the better part of a grand. . .as in $1,000.00 to get an issue off the ground. Printing for 200 copies alone, is around $700.00, and we all know the bite that's taken by the Postal System. And no, I'm not rich, and I don't finance this out of my own pocket! Zine sales pay for zine publishing and zine postage. So, what am I getting at here....? First... issue #1 finally broke even. Second...shame on those of you that didn't order your McTl yet. You're holding up the printing of McT2! First issue sales equal second issue printing...and there's still 100 #l's to sell. Third...I know there's talent out there! Ho use hiding, as I'll find you in due time, but why not make it easy on the both of us! Draw!...Write!...Create!....and then Submit those contributions! Issue #2 is nearly full, but what about #3!?!

Okay....now how about the profit that should be made here! Of course, sales also equal profit, of which every penny will go to the North Shore Animal League...guaranteed! But of course, you have to BUY the zines, to pay for the printing of the zines, to be able to have a profit left over to donate to the NSAL! (Catch my drift, you shirkers!) Just think, if you sit back and deny yourself the pleasure of enjoying a fan publication all about McCOY/DeFOREST, you're also denying some little furry critter the right to life!

Have I got you in tears yet! WELL, I HOPE SO, because we need your help to keep McCoy's T.O.Y. afloat. I can publish and edit to my hearts content, but it's all of you that will either make or break the continuation of the DKFC fanzine. And remember, DeForest and Carolyn were the ones that named McT...do you want to let THEM down!!!

Finally, there seems to be another fly in the ointment this time. I've extended the deadline for contributions for issue #2, to November 1, 1989. The reason for this extension is that I'm having - of all things - eye surgery done mid-September, and I'm sure things will get pushed back a bit. (Did I hear a sigh of relief from a couple ever-late-contributors out there!!!???) Well, that's de-story for this time, and until de next time - as Crazy Kris so charmingly puts it - ....

May DeForest Bewitch You

McCOY'S TOY is the first zine to be published by the DeForest Kelley Fan Communique. The zine is wonderful for the first time in publication. All the stories written by its members and dealing with loving devotion to the actor. I highly recommend the first issue as there will be more in our future. [1]

The DKFC's first zine has done the club, the editor, the contributors and the subject proud. The illustrations are outstanding; the printing is extremely readable; the layout of the entire issue compares favorably with other high-quality zines. This alone is enough to recommend it, but there's more: ALL PROCEEDS above the publishing and mailing costs benefit the club's official -- and De' s favorite -- charity, the NORTH SHORE ANIMAL LEAGUE.

I thought Vicky Nickerson's "A Shirt Tale" was wonderful and inventive. So, also, is "Duck", by Rayelle Roe. The illustrations for those stories were DElicious, as were those created for Bonnie Guyan's lovely story, "The Novelist." Pat Neal's article, "Carolyn, ably summed up many of the reasons why De's fans find themselves equally enthralled by his "very same wife", best friend, and soul mate.

There wasn't an entry in the entire issue I didn't enjoy. Even the computer-generated poems -- which made ZERO sense as far as I could discern -- were funny and very reassuring: we HUMAN writers, no matter how inexperienced or uncertain, will ALWAYS (at least for the foreseeable future!) be able to out-smart a computer in the creative writing department!

DKFC members are among the most talented in fandom, and McToy #1 proves it in spades. I recommend this zine to Kelley/McCoy fans everywhere. "McCoy's T.O.Y. #2 is ready for publication and purchase NOW, and is packed with long-awaited "Beads and Rattles" articles and illos. My recommendation is that you order then BOTH and start your new DEcade right!!! [2] 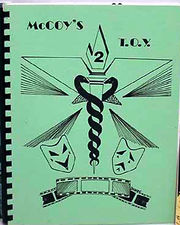 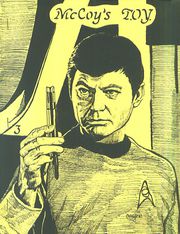