Fizzbin is a gen Star Trek: TOS correspondence club zine with at least seventeen issues. It contains both fiction and articles.

This zine is notable mainly for the 'Nova' series written by our honourable Chairman (take a bow, Ray [Dowsett]!). This is a naval story set in the Star Trek universe, but not on the Enterprise. It starts in 011. I also enjoyed The Collector' by Helen Sneddon in #6. A benevolent energy alien stops the Enterprise and asks for a gift for her race's collection. 'Doctor's Orders' by Sam Armitage in #16 has McCoy In the centre seat, and in 'Confrontation' by Janet Stewart in #17, Spock requests a transfer after Kirk has needlessly risked his life again.[1]

Fizzbin 5 was published in 1978 or before and contains 50 pages.

Fizzbin 6 was published in 1978 or before and contains 43 pages.

Fizzbin 7 was published in 1978 or before and contains 47 pages. 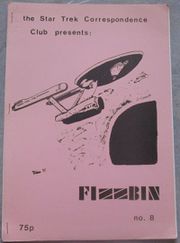 Fizzbin 11 was published in 1980 and contains 46 pages. It has art by Katy Brown (cover), Linda McGrath and Margaret Winks. 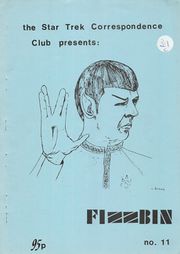 Oh God let him live! I never wanted anything so much in my whole life, but if Spock dies there'll be nothing left in this whole wide universe for me He felt the rain running down his face like tears.

And then, very deliberately, Kirk leaned forward and kissed that rain-soaked, haggard face very tenderly, very gently, and it didn't seem at all strange that he did so. Spock's eyes filled with quiet understanding and real affection. "Strange," he whispered, his lips hardly moving, "It....is only now that I feel I can tell you.....I love you, Jim." He stopped for a moment, just gazing into that bewhiskered face above him, and then with an effort added, "I couldn't even tell my mother that I loved her. And you..."

"There'll be time for everything, Spock. I promise you..."

"No," the Vulcan said, very softly, clinging to Kirk's hand as if it were the only thing that was keeping him from the darkness, "No more time. Not now, Now it's just....me and you, for ever." He closed his eyes, the rain running over his face and washing away the blood from his mouth, making everything clean and fresh again.[2] 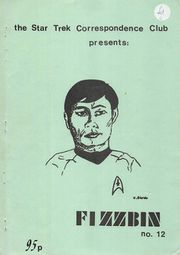 Fizzbin 15 is undated, though was published in 1981 and contains 48 pages. 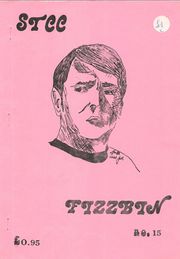 back cover of issue #15, Linda McGrath 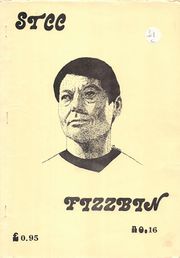 Fizzbin 17 was published in 1982 or before. It contains a story called "Confrontation" by Janet Stewart which may be related to Time Is: Time Was: Time Yet to Be and All Loss Restored.