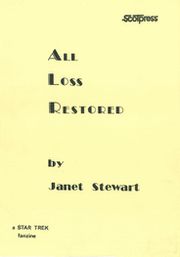 All Loss Restored is a Star Trek gen novel written by Janet Stewart and published by ScoTpress. It was published in 1983 and is 67 pages long.

It is a sequel to Time Is: Time Was: Time Yet to Be. This story may be related to a story called "Confrontation" in issue #17 of Fizzbin.

The artist is uncredited, but it appears to have been created by the author.

Kirk and Spock go back nine hundred years into Vulcan’s past to help Spock’s distant ancestor.

Regarding the Zine's Genre

In 1983, the author stated that this zine was not gen but instead (while not using the word) pre-slash:

I would like, if I may, to make a small, friendly comeback to Kate Daniels and Kathleen Bennet who were kind enough to review my stories 'Time Is Time Was..,' and 'All Loss Restored'. Who says the bond/relationship between my Kirk and Spock is purely platonic, mental and non-physical? I don't. Both stories are, in fact, heavily loaded with sexual overtones. It is a bond which, at the very least is standing right on the brink of a full sexual involvment. And any moment now folks....! [1]

The storyline in this highly enjoyable zine involves Kirk and Spock who go back nine hundred years into Vulcan's past to help Spock's distant ancestor, who also happens to be called Spock! This is in no way a K/S story. However, the close friendship between Kirk and Spock is explored in depth and well written. The other regular characters are briefly featured, as are Amanda and Sarek. On reading this sine, I got the feeling that this was perhaps a sequel to another story. This did not ruin my enjoyment.[2]

If this story is for real, I am a dutchman. Yuk - I don't know what Sheila was thinking when she accepted this particular m.s. The only REAL thing about it are the names of the characters. Perhaps I could believe it better if the quality of the writing matched the storyline. For the story is just possible. For 14 year olds who don't know anything about Trek fan fiction.[3]