Time Is: Time Was: Time Yet to Be 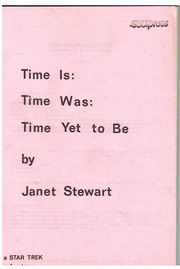 Time Is: Time Was: Time Yet to Be is a gen 60-page Star Trek: TOS novel by Janet Stewart. The subtitle: "(inscription on an old sun-dial)."

This zine has as sequel called All Loss Restored. This story may be related to a story called "Confrontation" in issue #17 of Fizzbin.

From an ad in Universal Translator #22: "Compton's Hazard sends Kirk 900 years into Vulcan's past. Can Spock find him and return him to his own time and place?"

Regarding the Zine's Genre

In 1983, the author stated that this zine was not gen but instead (while not using the word) pre-slash:

I would like, if I may, to make a small, friendly comeback to Kate Daniels and Kathleen Bennet who were kind enough to review my stories 'Time Is Time Was..,' and 'All Loss Restored'. Who says the bond/relationship between my Kirk and Spock is purely platonic, mental and non-physical? I don't. Both stories are, in fact, heavily loaded with sexual overtones. It is a bond which, at the very least is standing right on the brink of a full sexual involvment. And any moment now folks....! [1]