The Voyages (Star Trek: TOS zine published in the 1970s)

The Voyages is a gen Star Trek: TOS anthology.

According to Boldly Writing, it is the first zine dedicated to the character, McCoy. It also has a rare way of introducing the stories, with a dialogue between the editors. The first issue cost "$1.00 or pre-arranged trade."

It is partly a story of his relationship with Amy Bedford, a half-Lythian empath who in many ways foreshadows Troi in Star Trek: The Next Generation.

The Kraith story Spock's Decision, was to have originally appeared in this zine. See that page for more from Jacqueline Lichtenberg. 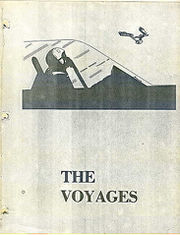 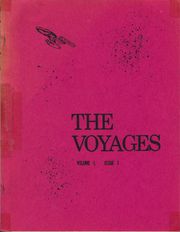 cover of issue #1, the 1973 edition, "Maureen [B.] with an enterprising lift from Bill Warren"

The Voyages 1 was published in 1973 and contains 54 pages. The cover is by Maureen B and Bill Warren. The 1974 reprint has 50 pages, cover artist is Allan Asherman.

It was edited by Pat Zotti. 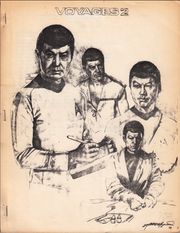 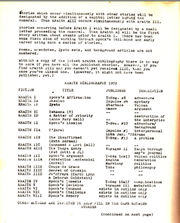 from issue #2, Kraith bibliography as of 1972, click to read 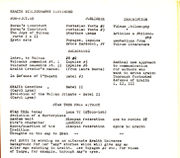 from issue #2, Kraith bibliography as of 1972, click to read

The Voyages 2 was published in 1973 and 61 pages. Cover by Kathie Maynard. Art & illustrations: Marilyn Hawkes, Alan Andres, Pam Tacoma, Steve Barnes. It was edited by Pat Zotti and Jim Thomas.

Many fans complained that this zine fell apart very easily, and that the editors needed a better binding system. 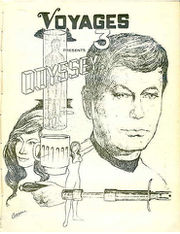 The Voyages 3 was published in 1974 and contains 148 pages. It is a novel, called Odyssey and is in the "Amy" storyline from the two previous issues. The story is by Carmen Carter, Kathie Farnell, and Pat Zotti. Cover: Pat Carroll. Art & illustrations: Alan Andres, Janice, De Petersen, Marilyn Hawkes Tighe, Pat Carroll

"Leonard McCoy is participating in a diplomatic mission when word reaches the Enterprise that the entire delegation has been assassinated. In truth McCoy is still alive, but in hiding as he attempts to escape to safety. Amy McCoy returns to Earth to be with the doctor's family. Uhen McCoy finally returns to the ship it is to learn that Amy has been kidnapped by slave traders." [4]

Carmen Carter's touch much improves the "Amy" storyline! Married to Amy for a few years now, McCoy is ordered to accompany a diplomatic mission investigating admission of Cirdan to the Federation. They find that McCoy's old friend, now the ruling Reyer, has been forcing modernization on an unwilling population, and a revolutionary movement bombs the meetings. McCoy is trapped on the planet for weeks, as the surviving Federation party first escape out of the city, then attempt to negotiate with the revolutionaries. Meanwhile the Enterprise is informed that he has been killed, and Amy, disconsolate, goes to Georgia to be with Joanna and the rest of Len's family for a service. (This is one of the best parts of the story, as some of McCoy's relatives are preachers and their encounter with Amy is entertaining.) On her way back, Amy is (oh, no, not again... yep, you guessed it...) kidnapped by slavers, as a valuable and rare Lythian. She pines, tries to escape from the evil Syndicate, does some pleasing damage to her captor, and eventually becomes friends with her telepathic guard and another slave, and they manage to escape. However, Amy has protected Liza from the worst of the Pit (a form of mind-sifter, it seems) and is too weak to complete the escape. Liza leaves her and goes looking for... she forgets what, in her confusion from the Pit. But she comes upon... our heroes! Kirk and McCoy, duded up as Syndicate buyers, have been granted 5 hours to find Amy. (Well, at first, Starfleet didn't want to acknowledge McCoy's resurrection, so for Fleet, this is actually doing good.) They have discovered that she has escaped the underground city and go looking when Liza finds them trying to steal an aircar. She begs for help; McCoy ignores her in his frenzy about Amy, but Kirk insists on rescuing her and then they discover they are all looking for Amy. They find her and the other slave, and after a brief fight with slavers, all go back happily ever after to the Enterprise. It was really pretty fun. But Amy's pretty sappy, and the slaver bit... geez. Faulwell's such a better mate for him. [5]

Artwork is all full page and absolutely gorgeous. 'Odyssey' is a novel of over 100 pages. The story's point of view changes from third person to first person from Amy's point of view to first person from Joanna McCoy's point of view to third person... If you have read and liked the Myfanwy and Dorothy series in T-Negative, you'll probably like this one. There are two stories, one in which McCoy is lost and presumed dead on a planet which is suffering a revolution and one is which Amy is kidnapped by slave traders. Of the two, McCoy's wandering around on the planet with a small party surviving the destruction of the embassy is better. I find Amy's part of 'Odyssey' just too unbelievable. But, I know people who enjoy the whole zine. [6]