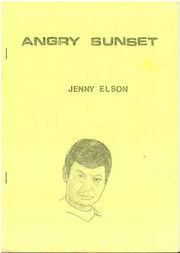 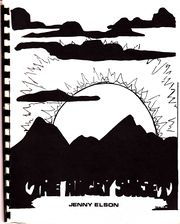 Angry Sunset is a UK fanzine Star Trek: TOS novel about McCoy's divorce written by Jenny Elson. Like many first-time fanzines, this fanzine has no title page, no table of contents, and no date anywhere in the issue.

An Ad: And the Earliest Age Statement

An ad for the 1975 reprint, one which has the earliest known example of an age statement: "BY POPULAR REQUEST! ANGRY SUNSET is due to be re-printed in lytho, with artwork by Helen McCarthy. This is a full length novel by Jenny Elson concerning McCoy's marriage and divorce. A story of deceit, mental agony, and destruction. This is an ADULT story, and is available to members over the age of 15 ONLY." [1]

Probably the most unpleasant picture of McCoy's wife and his marriage that you will ever read. Interesting picture of a strong, long-time friendship between McCoy and Montgomery Scott.[2]

Well, I did wonder why the great Dr. McCoy joined Starfleet. 'Just on old country doctor' -- huh! This story tells it all. He could have gone on to become a great scientist but he dallied and was caught in the age-old trap. He has regretted it ever since. Humphr! Could have saved himself a lot of heartache if he had dumped her. I don't like Sarah but Joanna redeems that. And the heart-torn, world-wise doctor is the one we can respect, isn't it. This short work can be expanded. The author perhaps should revive it and make some passages more coherent. The time scale is also confusing.[3]