Living in Spite of Logic 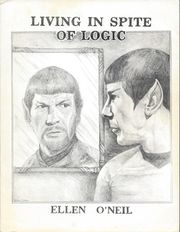 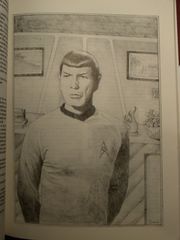 From Bill Hupe's catalog: "In the aftermath of 'Mirror, Mirror,' the Enterprise investigates the rumor that Kirk has a secret weapon called the Tantalus device. When Kirk disappears, the investigation focuses on Spock. Result: the mirror-Spock is sentenced to a prison that surgically destroys the telepathic abilities of Vulcans."

From The Monthly: "In the aftermath of 'Mirror, Mirror,' the Mirror Spock is sentenced to a prison that surgically destroys the psi centers of Vulcan prisoners. But Spock pulls off the perfect escape by transporting himself into our universe, leaving our Spock in his place."

Mirror-Spock pulls a switch to find out the secret of the Tantalus device, leaving our Spock confused and subject to prison in the Empire, his only help the frightened and alcoholic Mirror-McCoy -- who knows the secret but hopes to make Spock take the fall for him. Superbly written. My choice for the single best TOS fan novel in existence. [1]

Superbly written and, IMHO, one of the best Star Trek novels in existence, fan or pro...Mirror-Spock pulls a switch to find out the secret of the Tantalus device, leaving our Spock confused and subject to prison in the Empire, his only help the frightened and alcoholic Mirror-McCoy -- who knows the secret but hopes to make Spock take the fall for him. [2]

I read and enjoyed very much Living in Spite of Logic by Ellen O'Neill, available from her or Bill Hupe and Peg Kennedy. The story is a follow-up to the "Mirror Mirror" episode. The mirror Spock switches places with our Spock on a special errand. The story follows the adventures of both Spocks and is highly entertaining. [3]

Living in Spite of Logic is a non-K/S mirror universe Kirk and Spock novel, which certainly made me take notice when Ellen first passed us an ad, as most of the mirror universe material lately—almost all of it at least very good— has been K/S. This novel finds us right after "Mirror, Mirror"; Spock is about to find his career cut short for his actions in the episode, so he crosses over to our universe, unfortunately leaving our universe's Spock in his vacated shoes. The story's tight, the action and characterization done up to a "T": the elements wanted for a good -Star Trek story. Even for someone not into mirror universe oriented stories, Living in Spite of Logic is still a must read for the writing alone, which is good, because I did have the ending worked out about half way through the novel. Although the climax was expected as presented, the story was well-written enough that I stayed with it anyway.[4]

Living In Spite of Logic, by Ellen O'Neil, is an incredibly written genzine novel with a nice length (131 pages, double columns). I loved the zine series by Gloria Fry that I mentioned earlier, because of the way she wrote and how she showed the development of the friendship and mutual respect/loyalty between Kirk and Spock. Living In Spite of Logic doesn't cover the friendship between Kirk and Spock that much, but the plot is compelling, the detail of everything is so great in every chapter; and, even though the chapters alternate between the Federation and the Empire (mirror universe), the story is never confusing. There's a richness in the writing and a sense of involvement that is to be savored.

The plot of Living In Spite of Logic is so complicated that the best synopsis, I think, is provided by Ellen in her zine ads: "In the aftermath of 'Mirror, Mirror' the Mirror Spock is sentenced to a prison that surgically destroys the psi centers of Vulcan prisoners. But the Mirror Spock pulls off the perfect escape by transporting himself into our universe, leaving our Spock in his place." (Obviously, Ellen is much better then I at writing a synopsis, which is one reason why she's a writer and I'm not). The story had my interest throughout—I couldn't wait to read the next chapter—I was constantly wondering how the story would end. Fiona Graves did a well-drawn and appropriate illustration on the cover. There were no typos that I could see and the print was very easy to read—both greatly appreciated!! [5]

If Ms. (Weil has studied psychology, she is aware of the premise that the person is a product of the society in which he/she lives. However, in her novel, Living in Spite of Logic, she presents a different premise. What if people suddenly find themselves in a different set of circumstances, strangely familiar but a bit—skewed? How would you react to a world grown hard and unseemly when you are used to your own order, your own sense of purpose? On the other hand, how would your counterpart from that other cold world react if suddenly transferred to your world? If we are indeed products of our respective environments, then we should definitely feel out of place in a foreign one, but eventually be able to adapt. However, we are left with Ms. O'Neil's premise—what if we are sentients who, despite the influences surrounding us, are still meticulously unique in and of ourselves?

Kirk, Scott, Uhura, and McCoy have recently returned to their own dimension after having briefly experienced the alternate universe world of the Empire, a brutal, conquering opposite of the Federation. They left behind them a first officer who was aware of the alternate universe, who knew how to build and operate the rigged transporter which opened the door between both worlds, and he knew where the Tantalus device was located. Did you really think that would be the end of it? Once a door is opened...

In this alternate universe, Spock has lost his position as first officer. His captain is dead, and Sum now sits in the center seat. The Vulcan's fate is to be incarcerated for life at the Tau Geti forced labor camp. There is a specific penal order which must be carried out, however, before his incarceration. Sulu has ordered McCoy to remove Spock's psi center so that he will be unable to use his mental abilities to escape. Spock has three days to change this situation.

Meanwhile, on the Federation Enterprise, McCoy has devised a tool for surgery—a prototype which shows so much promise that he has been asked to present a talk at the annual Transporter Surgery Symposium. The device is no more than a mini-transporter—-highly sophisticated, of course, capable of pinpointing an anomaly and extracting it from the body without causing trauma to the patient— but a transporter, just the same. It can be adjusted to remove anomalies ranging in size from the microscopic to, say, the size of a human being...

Does this remind you of anything?

Ms. O'Neil strikes a balance of alternate universe people coping with our universe, and vice versa. Spock is whisked away to the Empire universe, facing what is equivalent to death for a Vulcan; the Empire Spock must face the disparity of his alter-ego, and the unfamiliar behavior of McCoy and the very much alive Kirk in this universe. And so the balance continues: a fast-paced, nail-biting drama unfolds in the Empire as our Spock tries to escape his fate and return to his own world—a reflective, character-searching journey awaits the Empire Spock.

The author doesn't leave us there. Things would be a bit too predictable, after all. She places a fly in the ointment with Richard Crandall, a slick character in both worlds but unquestionably the worst in the position of Imperial Investigator, if only for the fact that he has been accidentally switched with prisoner Crandall of the Federation Enterprise, who has escaped and found McCoy's transporter-surgical device. He easily recognizes its more sinister possibilities.

So, we have a cunning, dangerous man running loose on the ship who possesses a device that can simply remove you from existence. We have a desperate first officer who finds himself on the planet Vulcan where half-breeds are despised and shunned, looking for—and finding—unexpected help in unexpected places. It's a fine mess ye've gotten us into, Ellen!

I am rather fond of alternate universe stories, however, I have read my share of bad ones. But Ms. O'Neil certainly has something here. Precisely written, well-crafted, eminently interesting, the book is a charmer. Yes, it is predominately a Spock story, but friends of McCoy and Kirk will not be disappointed. If there is any criticism at all, the "settling of accounts" among the bridge characters on the Empire ship was perhaps a bit pat, especially Sulu so willingly giving up the captain's chair. I don't think Sulu, in either world, would be too happy about that.

That aside, however (a small matter, really, a minor tic in an otherwise clear view), the novel is superb. I can see why Pocket Books turned Ellen down—it was simply too good. [6]

No sex that I recall. It was submitted to Pocket Books, so of course it couldn't have much. If you want to read how this author writes NC-17, get a hold of T'hy'la 12. She has two stories in there. And one of them, "The Terran Teaser Meets the Double Whammy," I still think is outrageous. Not outrageously good, just outrageous <g>. But certainly well-written and not to be missed.

*Living . . .* is not a/u, although much takes place in the Mirror Universe. The short synopsis is that the Mirror Spock has taken our Kirk's suggestions and tried to foment a revolution. He has been arrested and is sentenced to . . . I believe he's sentenced to have the telepathic centers of his brain burned out. That or mind-wipe, I can't remember which. And at the 11th hour, he figures out how to escape to our universe. Unfortunately, his method is to exchange places with our Spock.

It's definitely a relationship novel, but not K/S, of course. Could have been rewritten as K/S, I think.

It was a fascinating challenge to throw at Spock, and I recall it as being very engrossing all the way through. [7]