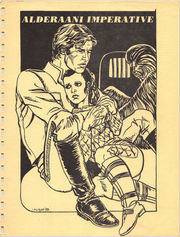 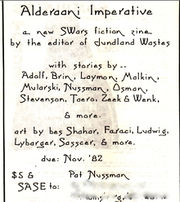 flyer from the 1982 MediaWest con program

Alderaani Imperative is a gen Star Wars 137-page anthology with an emphasis on Princess Leia.

This zine contains MUCH art. 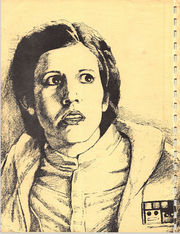 back cover, not credited, though likely Susan Perry-Lewis 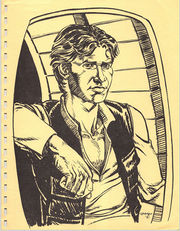 inside back cover, Wanda Lybarger

From a statement by Nussman in Contraband #1: "In spite of disturbances in the Force and other unnatural disasters that delayed this zine from its original February publication, ALDERAANI IMPERATIVE will be out in May."

"Again, for the record, I officially give permission for fans to copy any of my OOP SWars zines (frankly, it's easier on me than doing the photocopying myself): JUNDLAND WASTES (all issues), ALDERAANI IMPERATIVE, COMPLETE CIRCLE OF FIRE 1 and COMPLEAT ZEEK 1." [1]

You'll recall editorials in other fanzines detailing, at great length and with greater eloquence, the many problems, glinches, and frustrations in putting out that particular fanzine.

Well, you can take them as read. I had all those and made up a few on my own, just for the sake of added entertainment. I didn't expect them, either. Since for the past two years or so I've published a letter/review zine bi-monthly (Jundland Wastes), I thought AI would be a breeze. Another illusion shattered.

The only reason I did get through this experience moderately sane and with a finished fanzine is because of friends and acquaintances in fandom who offered, not only advice on fixing things I screwed up, but actual physical help when they saw me wringing my hands helplessly, wailing, "I'm never going to get this damned thing out!" (And "damned thing" was my kindest appellation for AI this past month or so.

I was crazy to have started a zine in the first place), Alderaani Imperative is definitely a one-shot. This is all there is, there won't be any more.

However, please do send letters of comment. I intend to type them up, make photocopies, and send a mini LoC zine to all the contributors. It's very hard to write (draw, edit, etc.) without feedback, and letters from readers are the only way contributors can get a feel of how well they've done. (This is not an original idea, by the way--Barbara Green Deer circulated the LoCs for Skywalker 6 in this manner. And as a contributor, I greatly appreciated it.) Any non-contributor who would like to read the LoCs can send a SASE with two stamps and I'll send a copy along.

Anyway, I'll shut up now and let you read. Incidentally, this zine is dedicated to those who helped me--some given credit on page 137 and some who preferred to be anonymous donors of their time, trouble, and advice. Without them there would probably be no AI, and definitely there would be no sanity left in it's editor's head.

These fanworks were described on a flyer, but are not in the finished zine. While some flyers' contents differed from the end product, the incongruities in this case are mysterious. 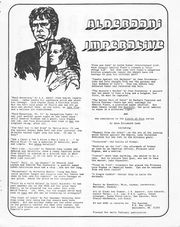 Alderaani Imperative is neatly balanced between Imperial and Rebel, humor and drama, Light Side and Dark Side. Pat Nussman, as editor, maintained this delicate balance and thus created a fanzine which fulfills the goal of giving everyone an opportunity for enjoying the Star Wars Saga for their own personal reasons.

As zines go these days, it isn't overly large, being under 150 pages. The type is reduced but the print is clear and the artwork came out beautifully. The spiral binding seems sturdy enough to keep the Wanda Lybarger cover safely attached to the rest of the magazine. Appearances rate an "A" for this zine. It's nice to be able to follow that up with this dictum that the contents rate an "A" as well.

Actually, this zine represents a collection of the very best available in fanwriting since the Table of Contents shows names like Zeek, Stevenson, Laymon, Nussman and other lesser lights such as Brin, Malkin, and many more equally recognizable names.

The zine starts off with a fine story by Eluki bes Shahar. "Son of the Morning", is another segment of the "Lady Mara" series and undoubtedly the best written of the lot. Lady Mara and Luke Skywalker meet on the surface of Yadrel Three. The meeting changes both. From previous stories, the reader knows that Lady Mara is insane but this is the explanation for why she is mad. Like all of the Lady Mara stories, this is both disturbing and bizarre but the writing is very nearly faultless and the construction above average for any fan writer. Roz Ludwig's illos are striking and appropriate.

The next tale is Jean Stevenson's "The Unicorn's Maiden". As one would expect with this writer, the work is subtle in its craft. Jean's words are always deliberately chosen to create a particular mood within the structure of a story but the emphasis is on mood. Her parallel in this piece is that of Han Solo as a unicorn; she succeeds in establishing it using Leia as the virgin for her focal viewpoint. Occasionally, the care with which she picks word's and images crosses uncomfortably into the area of artifice. There is no colloquiality to Leia's thoughts here which will tend to give a tone of melodrama unless yery delicately handled.

"Back-Returning" by Lisa Adolf is a humorous tale of Yoda's interference underscoring the truth of the master's statement, "Always in motion is the future..." It's worth a chuckle and picking up right from it is Josephine Taero's "Back-Returning Part II". The always absurd truth of humans' perverse behavior as far as aliens are generally concerned. We need to see much more humor in SW zines and thankfully, Adolf and Taero are around to enter in their two-cents' worth.

"Relentless" by Michelle Malkin is a further installment of her time line for the youth of Han Solo. This story adds as well to the variety of for it is strictly an adventure/action story even as it develops the character as Malkin perceives him. I felt that the hospital sequence might been improved through some judicious tightening as it stretched on a bit longer than necessary but Michelle Malkin certainly has a good handle on the basics of writing a short story. "Visit to a Small Planet" was Carol Mularski's contribution but it struck me as being slightly silly. The premise of having the stars of the Saga switch places with their characters is hardly new since Star Trek fandom has been writing the same piece of humor for the past 15 years. Cathye Faraci's illos however lifted this back to the level of the rest of the zine. Karen Osmon (I told you there were Imperials in this zine) gives us a Serzho story called "Hide and Seek". Karen is another writer in fandom who hasn't gotten the fame she deserves for this is a fresh angle on a story and well written. Deborah J. Laymon is underestimated in fannish circles as well although I'm beginning to see more of her work in good zines. Laymon has created the character of Sheresca d'Loren, a gypsy - looking alien. At the middle of it all are three contributions involving this fascinating creature, a short-short story, a prose monologue, and a story involving Han Solo. The latter is co-written with Deborah K. Goldstein. I am curious to see more of this universe and the development of the writing style of these two women..

There's this song. It's sort of, well, kind of ...bawdy. It's called "Hallodin's Woman" One might even (upon reflection) call the song vulgar but -- make no mistake about it — it's a wonderful song. Martie Benedict wrote it; Pat Nussman and Jean Stevenson got ahold of it and elaborated on it. The results are "Relative Ballistics" and "Relative Ballistics, An Alternate Report". Pat showed great delicacy in setting these two pieces back to back. Together they make you both laugh and cry.

Marcia Brin has several contributions in this zine, both poetry and short fiction. "The Best Way to Get Even" is the most complete in terms of fiction. Brin has written several stories of how Princess Leia finally rescues Han from the carbon freeze and this is simply another version thereof. Her other pieces include two monologue poems from the point of view of Han. "The Lie" is spoken by Han Solo after he comes out of carbon freeze and "Telephanty" is Leia's commentary on Luke Skywalker. It is unfortunately the case here that Marcia needs to break out into a new set of storylines. She's a facile writer and quite good at short-short pieces but the stories are the same we've seen elsewhere.

The second Imperial contribution comes from Sylvia Stevens and Barbara T in the form of "The Better Part of Valor". Centering around Admiral Sonel Alton Piett in the midst of battle, this was a refreshing change of reader point-of-view. The one aspect of the writing that bothered me was that I could not grasp any depth to the story.

"Phoenix From The Ashes" and "Brother's Keeper" by Anne Zeek were moving and different as well. The former is a brief tale of Princess Leia — a character Zeek habitually presents with sensitivity and care. The latter is a preview of the first SW trilogy, regarding the way in which Darth fell and Luke's father was killed. I liked both of these. The anchor story to this zine is "Sign of The Flame" by Jean Stevenson. There is so much meat to this story that the reader does herself an injustice if she speeds through it too quickly. Jean's well-known research into Campbell and Jung have given her the ability to develop powerful images in her writing. There are problems with the story — it is too short for its content, the dream sequences tend to the bewildering side, and it is possible that the characterization is slightly awry -- but this is not a hastily constructed story. In fact, I think Jean Stevenson is one of the better writers to learn from in fandom. Pat Nussman offers much in the way of poetry and artwork to round out the zine but the only piece I felt worthy of particular mention is "Killing Frost" by Deborah Laymon and illoed by Susan Perry-Lewis. Laymon writes good poetry and I'm beginning to make of habit of looking for her work -- a thing I don't do frequently when it comes to fannish poetry.

I was very sorry to read in Pat's editorial that Alderaani Imperative was strictly a one-shot. More zine editors should follow her example in putting together an interesting and well balanced fanzine. I know AI is out of print at this point but, by all means, go out and borrow, steal, or sponge a copy off your friends. This zine is really that good.[2]