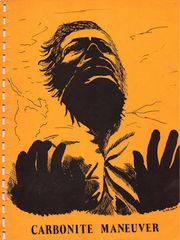 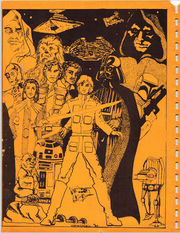 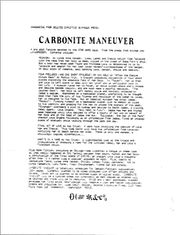 There were 105 copies printed.

From News of the Rebellion #9:

A one shot fanzine devoted to the SW saga. From the press that brings you Landspeeder. This will be a limited press run zine, only as many copies as ordered will be printed and there will be no reprints. $3.00 and a SASE for final price notification will reserve a copy and hasten publication.

[story titles and descriptions for "Reunion," "Four Preludes (And One Short Epilogue) on Han Solo," "Final Act of Love," and "What's in a Name."] Plus more fiction, including an Obi-wan/Yoda vignette; a tongue in cheek look at what really happened on Ord Mantell between that bounty hunter and Han Solo; a continuation of the final scene of EMPIRE; an insight into Leia's thoughts after that "I'd rather kiss a Wookiee" argument on Hoth. Plus, poetry by Jacqueline Taero, Linda Anne Watson, Christy Cohea; filks, cartoons. Art by Linda Yamashiro, Lori Roney, Tracy Christeansen, Yvonee Zan and others. CARBONITE MANEUVER is tentatively scheduled for a January/February publication. 100 pages. Currently planned to be mimeo produced with offset artwork and covers. Cover art is planned to be printed black on silver stock. CARBONITE MANEUVER will be a limited press run zine -- only as many copies as ordered will be printed and there will be no reprints. $3.00 and a self addressed, stamped envelope for final price notification will reserve a copy and hasten publication.

When the The Fanzine Archives: A Library for the Preservation & Circulation of Fan-created Material, then called "The SW Fanzine Lending Library," was first formed in 1987, it was one of only three zines that specifically asked to not be included.

Napalm in the Morning.

I asked to edit a full length zine and for my sins, they gave me CARBONITE MANEUVER. . .

CARBONITE MANEUVER has been an experiment for me, a foray into the world of a full size zine editing. It's been a worthwhile experience. Along the way I've learned a number of things, some of them variations on Murphy's Laws, some of them very valuable lessons.

Since its birth as an idea — a zine without so much as a name at first — CM has undergone a number of changes. We anticipated being mimeo produced. That proved unfeasible in the long run and the zine you hold in your hands has been professionally printed. We had hoped to find a printer able to do the cover on silver paper, only to discover that no such beast exists in Washington State. We had also hoped to offer you a humorous version of what really happened on Ord Mantell — unfortunately prior commitments, hectic schedules, unflexible deadlines, unexpected household moves have all conspired against that story's inclusion in the zine. The best laid plans of bounty hunters and zine editors often go awry. . .

At any rate, I hope you'll find CARBONITE MANEUVER an enjoyable experience. As my flyers and ads have announced, CM is a one shot fanzine and will remain so. I have no plans in the future to produce a second issue, or undertake the establishing of a full sized, regularly published SW saga fanzine. LANDSPEEDER will continue to be published by Deleted Expletive Press bimonthly, for as long as I'm able to continue with it, however. Although CM is a one shot, feedback is welcomed and encouraged. Some of our writers and artists are new to fanfic and interested in constructive criticism, so please don't hesitate to pass along your comments.

I would like to thank all the writers and poets that responded to my call for submissions. I would also like to thank my artists—who worked under impossible deadlines but came through with some gorgeous work in spite of it all. I A special thanks to Dy and Marti for typing services above and beyond the call, of duty. I will try to make up for the permanently cramped typing fingers and severely strained eyes from typing an epic length, single spaced manuscript. To add insult to injury I kept bugging you with stupid, thoughtless questions ("Is it ready yet?") I will make up for it somehow!

A special thanks to a Hedgehog that shall remain nameless for for title; CARBONITE MANEUVER. . .many a fan has groaned over the pun since your devious mind it brought it forth!

Last, but never least, a special thank you that even those two words fail to express adequately to J'lyn, for advice, submissions, continuing support, and so much else. . .thank you for everything. (What WOULD David say?)

And thank you, all of you, for your interest!

May all your Corellians be warm.

Five Stories That Were Retitled and Printed Later

"Four Preludes (And One Short Epilogue) on Han Solo or After the Empire Struck Back" by Marcia Brin, is a collection of pieces exploring the possible fate of Han Solo. It is a very, very early example of a sort of Five Things fiction). These stories were discussed in Han and Leia in Fanfiction.

Description from the flyer:

A thought provoking collection of four short pieces exploring the possible fate of Han Solo. In "Rovan." Han is dead and Leia is left alone to deal with her grief and an unfillable void in her life. A mission takes her to Rovan an eerie planet where one's dreams and desires become reality, and she must make a painful decision. "The Journey Back," Han Solo is left barely alive and horribly crippled by Jabba's sadism. Abandoned on a backwater planet, preferring to be thought dead than face the pity of his friends and revulsion of the woman he loves, Han is resigned to his fate. But an Imperial surgeon has other ideas. "Recall," Finding himself on a backwater planet with no memory or clues to identity and groping for the key to unlock the mystery of his past, "Stranger" overhears a plot to kidnap and deliver to Darth Vader, a visiting rebel agent, Leia Organa. "Hell Hath No Fury," Jabba has Han and things seem hopeless until Leia decides to offer a bounty of her own on behalf of wherein Leia Organa following up on information from Jabba, finds an unusual piece of statuary while walking through the park one day.

Four of these stories appear to have been re-titled (revised as well?) and published in Bright Center of the Universe #3 in 1993. Summaries below are from that later zine.

Listed on the Flyer, But Not in the Zine?

"What's in a Name" by Kay Crist -- "A lighthearted look at the trials and tribulations of choosing a name for the littlest rebel, Han and Leia's firstborn child."

See reactions and reviews for Final Act of Love.