Han and Leia in Fanfiction 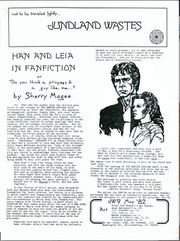 Han and Leia in Fanfiction is an article by Sherry Magee that was published in Jundland Wastes #9. It has the subtitle: "or Do you think a princess & a guy like me...?"

In it, Magee discusses the various ways fans envision the relationship between the two characters. She writes that the whole subject was a somewhat new one:

"No! That was the answer most fan writers gave prior to the release of THE EMPIRE STRIKES BACK. Concentrating on their own characters, who appeared as smugglers, pirates, female Jedi, and other adventurous types, they never left Han Solo in need of female companionship. Princess Leia Organa, however, was usually reserved for Luke, her relationship to the cocky Corellian limited to verbal sparings that were usually, but not always, friendly in nature. Han often played the role of reluctant older brother to the younger, more idealistic rebels, and was far too busy with his own bevy of ladies to cast more than an occasional irritated glance at the princess. [1]... This article is intended as an overview of some of those stories. I have divided it into sections and grouped the stories according to their relationship with the film. I trust that the readers will realize that it is impossible to afford every fanzine or to have read every story written about Han and Leia. Nor is it my intention to recommend the works of one author over another, rather these are examples of the relationship that I've found in my reading. If they are new to you, I urge you to seek them out and judge the quality for yourselves."

Prelude Tales: ("Stories in the category tell of Han and Leia's growing awareness that there is more behind their relationship than friendship or antagonism. They usually occur after the events in "A New Hope" and before those in "The Empire Strikes Back.")

As the Reel Turns: ("Star Wars was conceives as an action-adventure space fantasy series, and the films move at a rapid pace with few interludes for the characters to talk and get to know each other. The stories in this category were written to provide those interludes and further define the feelings of the characters.")

The Search for Solo: ("Han is carried off by the bounty hunter Boba Pett at the end of TESB, supposedly to be returned to hla impatient creditor Jabba the Hut. Lando and Chewie are in hot pursuit and promise Lela that they will find the Corellian. But many fans were not content to wait until the release ofthe third film. The following are several versions of the search for and the finding of Han.")

After the Thaw: ("A number of fan stories deal with the future of Han and Leia predicated on the theory that the Corellian will be found alive in Episode VI. But what will happen then? Do they truly love each other? Will they stay together? What about the other women in Han's life? Here are some examples of proposed solutions.")

"And that concludes the overview. The stories I've surveyed speak for themselves as to how the relationship between Han and Leia has been handled in fan fiction. The release of THE EMPIRE STRIKES BACK added a new dimension to the characters, and it is Leia who seems to have gained the most from the change. Fan writers seldom had trouble seeing through the cocky character of Han Solo to the warmth and vulnerability below the surface. In the Han-Leia stories he still displays these qualities, often coupled with one not often shown in the films— patience. He seems to understand Leia's motivations better than she herself, and is willing to wait for her, or to help her reach out of herself to him. But it is Leia who has changed the most. While she has always had her fans (see the spirited defense of the character in "Interpretations" in KESSEL RUN), she was often left out of stories, relegated to figurehead of the rebellion, or given a role in which she behaved in a silly, foolishly stubborn, or bitchy manner. A less accessible character than her male counterparts, she has come into her own since TESB, It is more common now to find her portrayed as a competant, assertive woman who takes an active part in decision-making and problem solving. She is still stubborn, often with a nasty temper, but vulnerable. She has begun to grow and change. One can only hope that her evolution continues after the release of REVENGE OF THE JEDI."