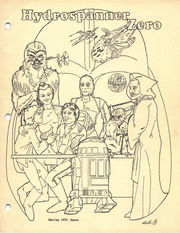 cover the first, perhaps only issue, by eluki bes shahar

Hydrospanner Zero is a gen Star Wars 96-page anthology. It is "a continuation and expansion" of Galactic Flight and was a one shot very limited print run zine. While the submission request stated it was to not be a one-shot, this was the only issue published. 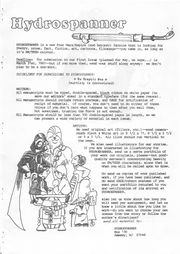 The submission request asked that material contains "No Graphic Sex (subtlety is appreciated)." According the publication date of early 1981, this stipulation would have been the editor's choice rather than a reaction to the Open Letter to Star Wars Zine Publishers by Maureen Garrett.

[Casablanca]: 'Niki Khimra in Eluki bes Shahar's "Casablanca" is a former friend of Han's (maybe lover also) but now, apparently with excellent reason, hates him rather thoroughly. Where Bethen occasionally veers dangerously close to the "woman as victim" stereotype, 'Niki leans toward the "tough broad" end of the spectrum but is saved by bes Shahar's care in showing more than one side of the character. 'Niki is another pilot and smuggler, her "partner" a sentient ship's computer (very similar in more than just name to Poul Anderson's "Muddlehead" in the David Falkayne stories — this story is full of such references). She opposes Han, mates mistakes and accepts the consequences, and even though she ends up apparently reconciled with Han, even temporarily teamed with him, she makes it clear that she is her own person in all senses of the expression. [1]

[zine]: Hydrospanner is the editor's debut for a remarkably talented and versatile author/artist named Eluki bes Shahar and a return for Chris Jeffords, formally co-editor of Galactic Flight. If this zine is any indication, we can expect good things from this zine in the future.

Reproductions in this zine is very nice: the print clean and legible, the layout uncluttered but without wasted space, with a well-chosen variety of title-styles to match the stories. The art is treated with respect... It is also, simply, a fun zine to read. If there are no stories of profound philosophical significance and singing prose, neither are there pieces that make you cringe with stylistic ineptitudes and yawn with boring, pointless plots. 'Simple Tricks. is a slight but pleasant anecdote about Han Solo's attempt to play the part of Leia's escort to a diplomatic function. 'Truth' is an alternative universe version of Luke's leavetaking from Tatooine in which he confronts Uncle Owen and Aunt Beru. The author gives her explanation of the reasons they did not tell Luke about his parentage and what Luke's reaction to discovering it would have been. The accompanying filk is an unusually thoughtful and sympathetic treatment of Owen. 'The Other Woman' is based on an obvious gimmick, but one that I have not seen before in SWARS fan fiction. Rather than reveal the point, I will just say the very good writing more than makes up for the rather trite idea, and the art for the piece is lovely, my favorite single illo in the issue. Sylvia Stevens contributed three items. The first, 'Memorandum' presents her idea that the Jedi were clones, and her intriguing belief that Kenobi represented a false schismatic innovation in the concept of the Force which Vader attempted to oppose, an unusual and highly interesting theory. 'Ready I Will Be' describes the destruction of the Jedi from Yoda's point of view and his decision to wait for Luke on Dagobah. The final story, 'Drop Everything,' starts out as a cute joke but ends up with one of the most plausible and perceptive explanations for Han and Leia's constant sniping that I have seen. 'Behind Closed Doors' is the least successful of the stories, a series of fairly unoriginal and predictable musings by the people present at the Mad Tea Party on Cloud City. 'Day of Reckoning' is a short, but delightfully shaggy dog story. As far as Eluki bes Shahar's 'Defense of Darth' is concerned, just let me say that I believe every word of it, but I admit to being a totally unobjective fan of the Dark Lord and biased in favor of her point of view. The highlight of the zine is, without question, 'Casablanca' and the companion poem 'The Great Exposition of "Nix Knimara."' The poem expresses perfectly eery sf/media fan's dream, a wry, humorous, but ultimately serious description of what it is that attracts us all to this fictional world... For much the same reason, I found Casablanca' one of the most enjoyable stories I've read in a long time. As pure story, it is completely unoriginal, with your typical Corellian Female Ship's Captain and Old Friend of Han Solo telling her usual tale of a love/hate relationship with our Favorite Corellian. It is, in fact, an intentional pastiche, with no less than -- so the author assures us -- fifty-seven Out-Galaxy References to famous movies, sf classics, and comics, and the fun comes from identifying them. I admit to finding forty-eight of them myself, and looking for the rest will be a rewarding puzzle for many dull afternoons to come...

The art in Hydrospanner Zero is in general adequate, if not particularly outstanding, except fro some less-than-successful illos by Contessa and some distinctly uninspired examples by Carrie Rowles Aside from the previously mentioned illo by Carol McPherson for 'The Other Woman' and a nice little sketch of Han and Chewie by Anne Davenport, the best art is probably Eluki's own illos for 'Casablanca.' Her style, while better suited to cartoons than realistic art, is outstandingly clean, clear and professional with never the slightest concession to fudged proportions or uncertain draftmanship disguised by 'artistic' shadows or other amateur devices. While nothing in this Hydrospanner will be remembered as Great Literature it is a thoroughly enjoyable zine. The editors will be continuing their partnership with a successor zine called Outland Chronicles, a collection of Susan Matthew's complete non-Ragnarok [2] fiction called 'Matthews Chronicles' [never published], an encyclopedia of all known SWARS fannish universes as described by their authors, to be titled 'Alternates' [never published]. All three projects sound well worth buying. [3]